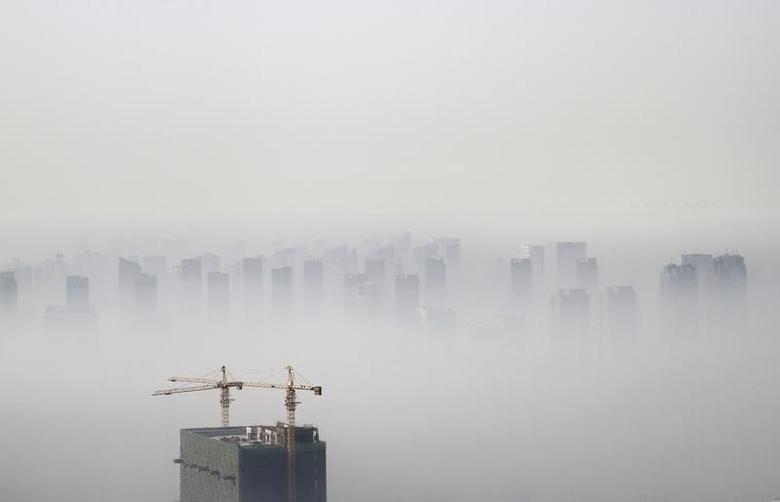 A building under construction is seen amidst smog on a polluted day in Shenyang, Liaoning province November 21, 2014. REUTERS/Jacky Chen

Governments gave the green light on Thursday for a U.N. scientific study on how to meet an ambitious global warming target, despite growing worries by some scientists that the goal may be unrealistic...

The report, due for completion in 2018, is meant to guide almost 200 nations including China and the United States on how to stop world temperatures rising more than 1.5 degrees Celsius (2.7 Fahrenheit). its' open ended - no date set

But some scientists say the 1.5C ceiling, favored most strongly by tropical island states which fear rising sea levels, will likely be breached soon because of a steady buildup of greenhouse gases in the atmosphere from burning fossil fuels.

And world leaders have only signed up for a less ambitious plan - their promise in Paris last December to limit global warming to "well below" 2C above pre-industrial times, while "pursuing efforts" for 1.5 degrees.

The study, approved by government officials and scientists at the U.N.'s Intergovernmental Panel on Climate Change (IPCC) in Bangkok on Thursday, will look at ways to meet the tougher target.

The paper, due for completion in 2018, will also look at the likely impacts of a 1.5C rise on the planet, from tropical coral reefs to Greenland's ice, and try to ensure that policies to limit warming also reduce poverty.

Average world surface temperatures are on track to set a new record high in 2016, more than 1C (1.8F) above pre-industrial times, and threaten to cause ever more downpours, heat waves and to accelerate a rise in ocean levels.

Oliver Geden, of the German Institute for International and Security Affairs, told Reuters that scientists and governments were irresponsible to suggest it was still feasible to limit warming to 1.5C.

The IPCC report "should not be mis-interpreted as a sign that the industrialized countries are now willing to mitigate at the level that would be needed" to limit temperature rises to 1.5C or even 2C, he said.

And last week, two scientists wrote in the journal Science that a 1.5C limit would have to rely too heavily on so-called "negative emissions" to extract carbon dioxide from the air with technologies that do not yet exist.

"Negative-emission technologies are not an insurance policy, but rather an unjust and high-stakes gamble," wrote Kevin Anderson of the Tyndall Center and Glen Peters of the Center for International Climate and Environmental Research in Oslo.

Thelma Krug, a senior IPCC scientist from Brazil, told an online news conference that the report would study 1.5C without pre-judging whether it was possible.

And some technologies for reducing carbon dioxide sound promising. Last week, scientists at the U.S. Oak Ridge National Laboratory, for instance, reported that they had found a method to convert carbon dioxide into ethanol.