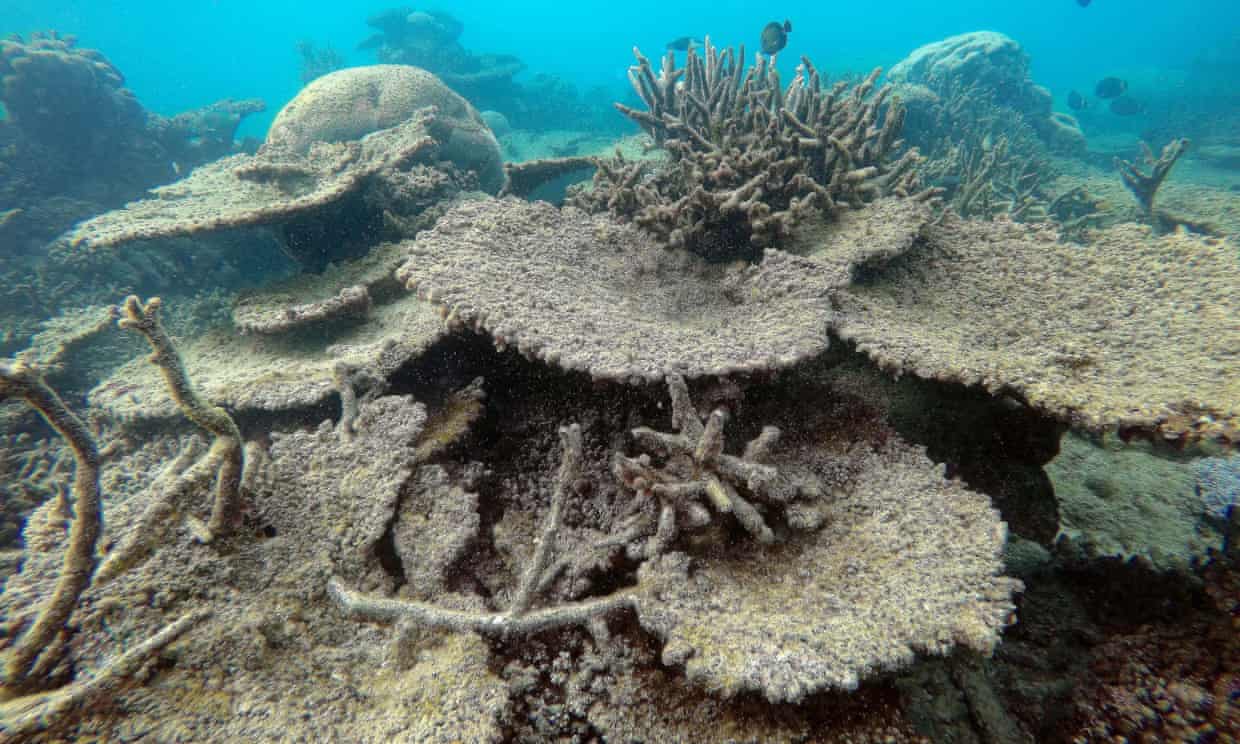 Report projects by 2050 more than 98% of coral reefs will be afflicted by ‘bleaching-level thermal stress’ each year...

The Great Barrier Reef will not survive coral bleaching if current sea temperature trends continue, according to a new report charting increases over the past three decades which blames manmade climate change for the problem.

The study found thermal stress to coral reef areas was three times more likely when its investigation finished in 2012 compared with when it began in 1985, forecasting “more frequent and more severe” bleaching through the middle of this century.

Led by researchers at the US National Oceanic and Atmospheric Administration, and published in Scientific Reports journal, the report projects that by 2050 more than 98% of coral reefs around the world will be afflicted by “bleaching-level thermal stress” each year.

Australia must choose between coal and coral – the Great Barrier Reef depends on it...

“The likelihood of the reef being able to survive through that is extremely low,” the report’s co-author, Scott Heron of the NOAA, told Guardian Australia. “If annual severe bleaching was happening across 98% of global reefs, it is very unlikely the Great Barrier Reef would be maintained.”

The report found 97% of 60,000 coral reef locations risked bleaching across the timeframe studied, with “drastic increases” expected to follow. “Coral bleaching events have become and will continue to become more frequent and severe,” it reads.

Since the conclusion of the investigation, the planet has experienced the longest bleaching event on record.

“Scientifically the facts are clear, that the level of warming we are seeing is a direct result of human activities globally,” Heron said, speaking to the report finding that the “main driver” of stress to coral reefs were high sea temperatures. “The increase in prolonged high temperature events on coral reefs is a stark example of the effects of climate change.”

The researchers observed that “summer-like” water temperatures had increased decade to decade with a “corresponding shortening” of the respite period experienced during winter, with reefs “among the most sensitive of all ecosystems to climate change”.

For the Great Barrier Reef, which a poll found two-thirds of Australians want to see declared a national emergency, its southern reaches have not been as significantly affected by thermal stress as it has further north. According to Heron, this is a positive in the short term, but it would be wrong to assume it would remain this way.

What an extraordinary, gutless capitulation by Josh Frydenberg...

“I think it is wonderful to point out that there are parts of the Great Barrier Reef that escaped the impacts of bleaching for all of the industries who use the resources of the reef,” he said. “But to say that is representative of the entire reef is a complete falsehood.”

Asked whether the domestic politics of emissions reduction, highlighted this week in Canberra, frustrated the efforts of the scientific community, Heron remained upbeat that necessity would ultimately drive the public policy solutions at home and abroad.

“I still have hope that they will respond with appropriate urgent action on reducing greenhouse gas emissions and concentrations in the atmosphere,” he said.

“We are on an upward trajectory at an upward rate and we are already halfway towards the threshold that has been defined as being a limit that we really cannot reach.”