GREENLAND IS MELTING AWAY... If the Greenland ice sheet melts completely, will drive up sea levels in the coming decades by about 20 feet. Photo: AFP

Researchers gather empirical data from the bone chilling glaciers in Greenland to assess the impact of climate change amid the looming threat of suspension of government funds for these projects...

Their research could yield valuable information to help scientists figure out how rapidly sea levels will rise in the 21st century, and thus how people in coastal areas from New York to Bangladesh could plan for the change.

Each year, the federal government spends about $1 billion to support Arctic and Antarctic research by thousands of scientists like Dr. Smith and his team. The agency officials who receive that money from Congress, including the directors of the National Science Foundation, NASA and the National Oceanic and Atmospheric Administration, say the research is essential for understanding the changes that will affect the world’s population and economies for more than a century.

But the research is under increasing fire by some Republican leaders in Congress, who deny or question the scientific consensus that human activities contribute to climate change.

Leading the Republican charge on Capitol Hill is Representative Lamar Smith of Texas, the chairman of the House science committee, who has sought to cut $300 million from NASA’s budget for earth science and has started an inquiry into some 50 National Science Foundation grants. On Oct. 13, the committee subpoenaed scientists at the National Oceanic and Atmospheric Administration, seeking more than six years of internal deliberations, including “all documents and communications” related to the agency’s measurement of climate change.

Any cuts could directly affect the work of Dr. Smith and his team, who are supported by a three-year, $778,000 grant from NASA, which must cover everything, including researchers’ salaries, flights, food, computers, scientific instruments and camping, safety and extreme cold-weather gear. Every scientist, Dr. Smith said, is keenly aware that the research costs “a tremendous amount of taxpayer money.” 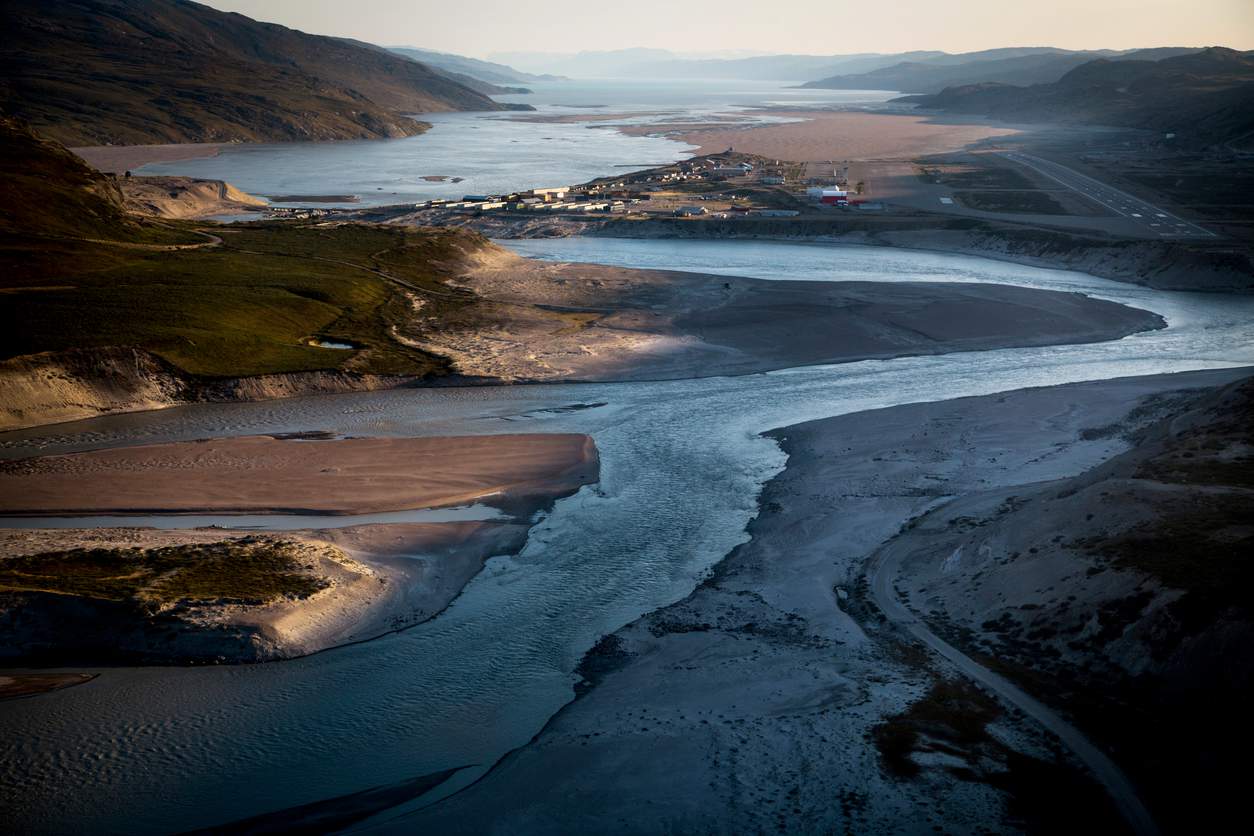 In July, Dr. Smith’s team arrived in Kangerlussuaq, Greenland, a dusty outpost of 512 people on the island’s southwest coast, which serves as a base for researchers to prepare for fieldwork on the ice sheet.

The scientists were excited but anxious as they prepared to travel inland by helicopter to do the fieldwork at the heart of their research: For 72 hours, every hour on the hour, they would stand watch by a supraglacial watershed, taking measurements — velocity, volume, temperature and depth — from the icy bank of the rushing river.

“No one has ever collected a data set like this,” Asa Rennermalm, a professor of geography at the Rutgers University Climate Institute who was running the project with Dr. Smith, told the team over a lunch of musk ox burgers at the Kangerlussuaq airport cafeteria.

Taking each measurement was so difficult and dangerous that it would require two scientists at a time, she said. They would have to plan a sleep schedule to ensure that a group was always awake to do the job. Everyone knew the team would be working just upriver from the moulin — the sinkhole that would sweep anyone who fell into it deep into the ice sheet.

The morning before their departure, the team gathered in a hangar to pack gear and provisions: tents, collapsible metal cots, generators, pickaxes, crampons, freeze-dried meals, a wealth of scientific instruments, vials for snow, ice and water samples, and a cooler to bring those samples back to labs in the United States.

They also took toilet paper and several plastic bottles, each labeled in marker with a large letter “P.” The bottles were for the scientists to urinate in should they not want to go outside in below-freezing nighttime temperatures to the open-air “toilet” on the ice. Afterward they would serve a practical purpose, as hot water bottles tucked into sleeping bags.

Not least, they packed a pair of 10-pound aerial drones, to map the icy watersheds. 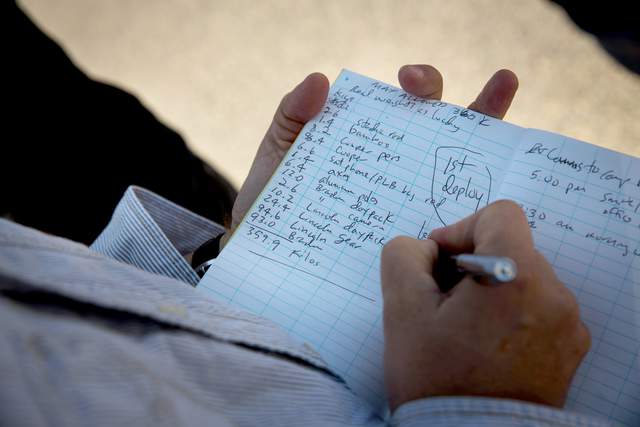 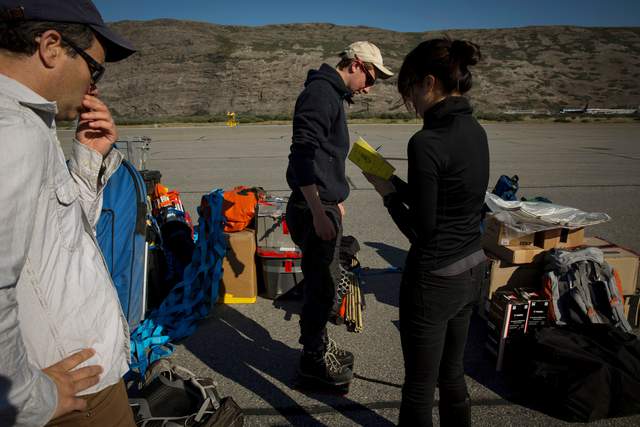 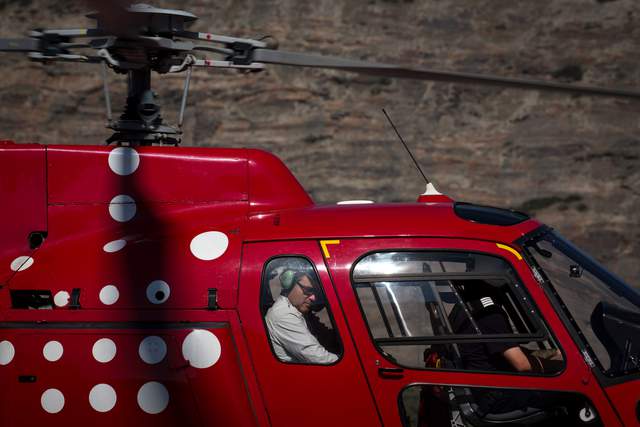 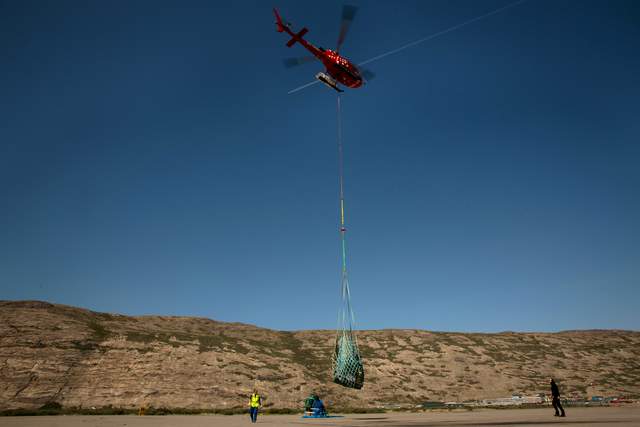 Every item was weighed and reweighed since the helicopter could carry no more than 360 kilograms — 794 pounds — and would have to make several trips. Dr. Smith’s NASA grant covered 10 hours of helicopter flight time, including the pilot’s fee, at a cost of about $5,000 per hour.

The scale brought bad news: The gear was far too heavy. “Now we start getting rid of things,” Dr. Smith said grimly as he and the team began jettisoning extra food, utensils and blankets. They scaled down to the barest essentials and anxiously reweighed the items: 359.9 kilograms.

At last the helicopter took off with the team’s gear hanging from an attached net sling. The scientists gazed at the seemingly endless surface of the ice, beneath the chopper, spreading in all directions, threaded with aquamarine rivers and lakes. After a 40-minute flight, the pilot cautiously bounced the helicopter on the ice, making sure it was hard enough to land on.

Stepping out, the scientists were hit by the cold of the Greenland summer — the temperature ranged from 26 to 40 degrees while they were there — a constant wind and the glare of the sun.

As the researchers began to set up camp, Mr. Overstreet, the University of Wyoming doctoral student, headed toward the river, silent as it sliced through the ice. More than any other member of the team, the success of the mission rested on his shoulders.

Mr. Overstreet, 31, who grew up kayaking and rafting in Oregon, had designed the complex rope-and-pulley system — modeled on swift-water boat rescue systems — that would be crucial to gleaning data from the treacherous waters. Before coming to Greenland, he spent months refining and practicing his rope system on rivers in Wyoming. 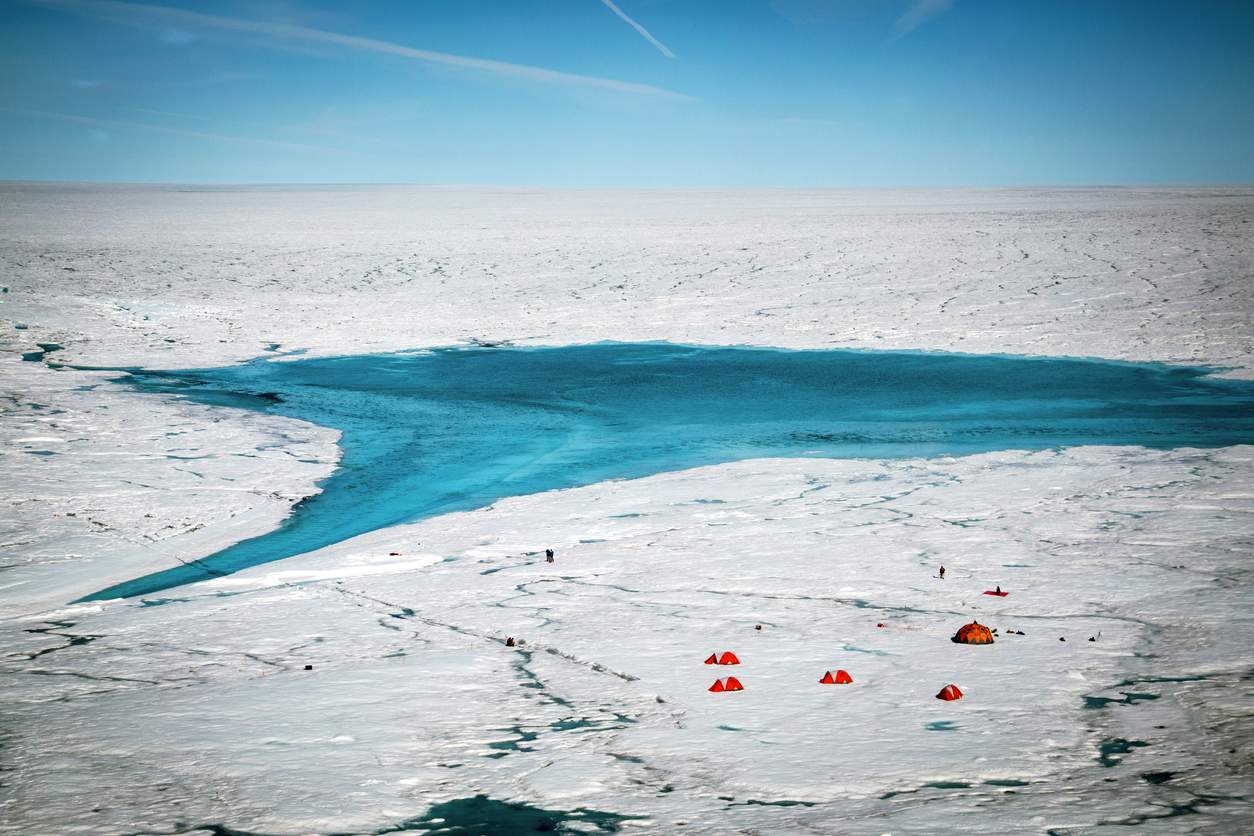 The team soon got to work. A helicopter pilot flew two of Mr. Overstreet’s colleagues, Mr. Pitcher and Matthew Cooper, both of the University of California, Los Angeles, across the 60-foot river. On the opposite bank they drilled into the ice, attached an anchor and harnessed themselves to it for safety. They attached a nylon line to the anchor, with the rest of the line coiled in a heavy bag.

Now came the crucial part: The men took turns hurling the bag across the river, but it repeatedly fell into the water. After an anxious half-hour, Mr. Cooper finally got the rope across. Mr. Overstreet caught it and began setting up the rope-and-pulley system he had been testing for so long. 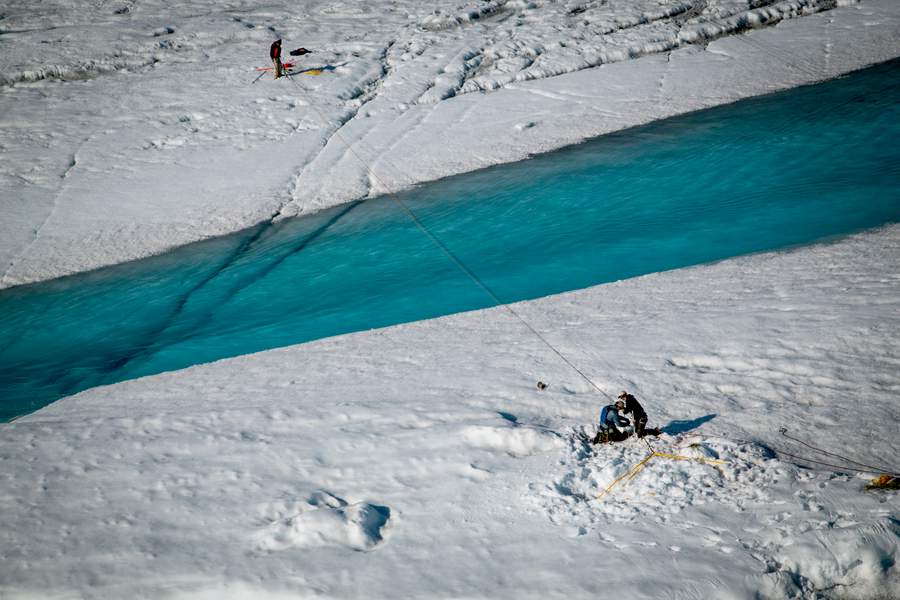 Farther upstream, Dr. Smith cast what looked like three small, round life preservers into the river. At $3,000 each, they were equipped with waterproof computers, GPS and sonar depth technology, all to beam back information about the river’s elevation, speed, depth and more. But the drifters were on kamikaze missions. After sending back the measurements, they would be swept into the moulin.

On the edge of the camp, Johnny Ryan, a doctoral candidate in geography at Aberystwyth University in Wales, launched an airplane-shaped drone from a slingshot-like device, then guided it over a nearly 75-square-mile area. But then the drone went silent. “It stopped talking to me, and now it’s crashed in the wilderness,” Mr. Ryan said.

Mr. Ryan, who wore a hot-pink knit cap and purple sunglasses that set off his bright red beard, launched his backup drone. Feeling stressed, he monitored its flight nervously as the hours rolled by, drinking cups of tea to keep warm.

At the riverbank, Mr. Overstreet and Mr. Pitcher started the data collection by clipping a computer device that looked like a boogie board to the line running across the river. Every hour they sent it back and forth to measure the water’s depth, velocity and temperature. 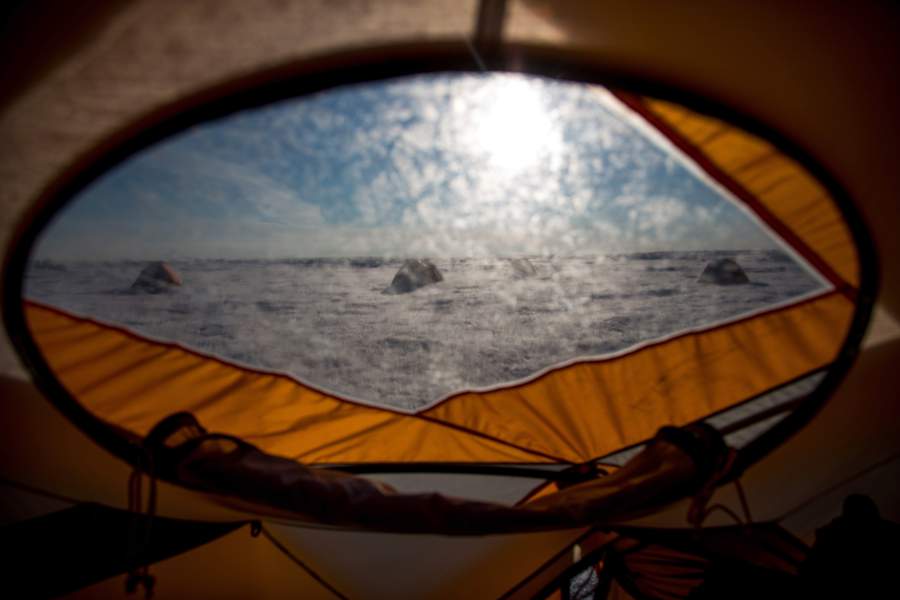 But as the day stretched into night, the device’s battery, sapped by the cold, began to die. By now the sun had dropped lower, filling the sky with a spectacular orange glow. The scientists were worried — the death of the battery would mean the death of their mission.

An idea occurred to Mr. Overstreet. He found a roll of heat-reflecting silver sheeting at the camp and wrapped it around the boogie board battery. During the next run across the river, it stayed alive.

But the battery continued to wane, so Mr. Pitcher pulled out gel hand warmers from his gloves and tucked them into the battery’s silver jacket. Success. The battery stayed warm and functional.

For the rest of their time on the ice, the scientists would have to ration the hand warmers. Saving the life of the battery would save the mission to record the first comprehensive on-the-ground, empirical data on the flow of a river off the ice sheet.

They might even learn, Smith said, that the water is re-freezing within the ice sheet and that sea levels are actually rising more slowly than models project.

For three days and three nights, the scientists continued to measure the river, as up to 430,000 gallons of water a minute poured off the ice and into the moulin. On the final morning, the team, tired but elated, gathered by the river as the boogie board made its final trip. By then, Ryan’s backup drone had safely completed its mapping mission. Overstreet broke open a celebratory bag of dried mangoes — a lavish treat for the ice campers.

“It’s hard to make the choice to come on projects like this, but everything in my life has prepared me to come out here,” Overstreet said. “We go from battling the river to working with it, and then we learn so much from it.”