Supply chains now crisscross the globe, and most start where it's hottest...

Within a century of Henry Ford's first assembly line, the entire world economy has become a single, virtual conveyor belt. And that belt is getting hot.

When weather catastrophes hit, the big-ticket damages tend to come not from heat waves but from floods, hurricanes, and wildfires. Natural disasters caused billions of dollars in damage last month alone, according to a recent report, from Canadian wildfires ($3.1 billion), to European flooding ($4.6 billion), to U.S. storm damage ($1 billion).

The economic loss from 300 Indian heatwave deaths in April however is listed as “unknown.” That may not be the case for long, as such deaths are the latest canary in the coal mine—or any mine, rainforest, or valley across the Earth's hot middle, where the building blocks of the developed economies are gouged out of the ground.

Manufacturing these days involves facilities in multiple countries, each of which has a sequential role in taking raw materials a step closer to being finished products. Imported materials may remain unfinished, even after they're exported to the next station on the international assembly line. This “vertical specialization,” it turns out, may have a blind spot when it comes to climate change, according to new research from the Potsdam Institute for Climate Impact Research. Manufacturing is only as strong as the weakest, or in this case hottest, link in the supply chain. 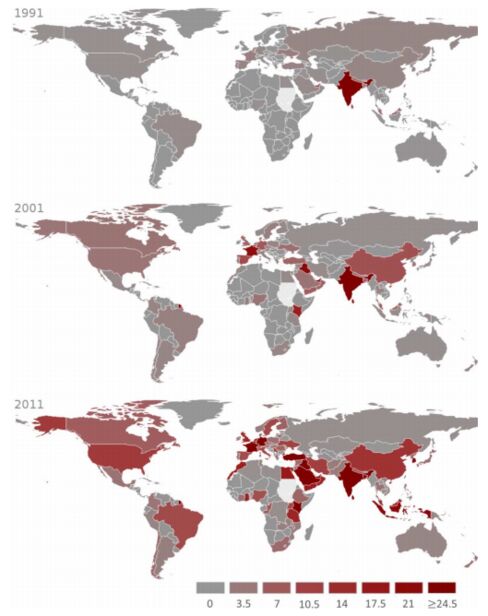 This graphic shows which nations have become more dependent on supplies from India from 1991 to 2011.

The study is based on trade flows among 26 sectors within 186 countries. Sifting through economic, population, and temperature data, Leonie Wenz and Anders Levermann found that the risk of economic losses from worker heat stress doubled from 2001 to 2011. The losses percolated down supply chains almost imperceptibly. But while the absolute losses are negligible at this point, Levermann said, the rate of change should be enough to call attention to the growing risks as the world warms.

"We usually think that trade will allow us to adapt to climate change," said Solomon Hsiang, a public-policy professor at the University of California-Berkeley who has studied the effects of climate change on economic performance, "but this analysis highlights ways in which vulnerability to climatic events might actually increase our exposure to climatic risks."

Hsiang said that, similar trends in the U.S. amplified the economic impact of hurricanes on inland states by raising the cost of capital nationwide.

By 2011, globalization may have made supply chains less resilient to heatwaves. This chart shows the estimated production losses linked to heat stress under a high carbon-pollution scenario, given the structure of the global economy in 1991, 2001, and 2011.SOURCE: Wenz et al; Science Advances

With hotter temperatures looming, researchers have studied what that means for whole economies. An average annual temperature of about 55 degrees Fahrenheit (13 degrees Celsius) may be optimal working conditions. When the mercury rises past about 80F, workers start to become less productive in industries like mining, construction, or forestry, where there’s no escaping into an air conditioned offices.

While this Potsdam paper looked at the effects of heat, Levermann said he expects that other meteorological wallops getting the most attention—floods, drought, storms—will be shown to have a similar effect on what may be an increasingly fragile global manufacturing bucket brigade.