GULF OF MEXICO WATERS ARE FREAKISHLY WARM, WHICH COULD MEAN EXPLOSIVE SPRINGTIME STORMS... Water temperatures at the surface of the Gulf of Mexico and near South Florida are on fire. They spurred a historically warm winter from Houston to Miami and could fuel intense thunderstorms in the spring from the South to the Plains...

In the Gulf, the average sea surface temperature never fell below 73 degrees over the winter for the first time on record, reported Eric Berger of Ars Technica.

Galveston, Tex., has tied or broken an astonishing 33 record highs since Nov. 1, while neighboring Houston had its warmest winter on record. Both cities have witnessed precious few days with below-normal temperatures since late fall. Average temperature rankings along the coast of the western Gulf of Mexico this winter. (Southeast Regional Climate Center)

More often than not, temperatures have averaged at least 10 degrees warmer than normal. “The consistency and persistence of the warmth was the defining element of this winter,” said Matt Lanza, a Houston-based meteorologist, who has closely tracked the region’s temperatures.

Warmer-than-normal weather is predicted to continue in Galveston and Houston, with afternoon temperatures of 80 to 85 degrees through the weekend (normal highs are in the mid-70s).

“A steamy Gulf has meant that any time winds blow out of the south, we’re not going to cool down that much overnight, and daytime temperatures can warm pretty quickly,” wrote Berger, who also pens the Houston weather blog Space City Weather.

To the south of Galveston and Houston, Brownsville, McAllen and Harlingen all posted their warmest winters on record, by large margins. “Call it the ‘Usain Bolt’ of records: Leaving the others in the dust!” tweeted the National Weather Service forecast office in Brownsville.

The abnormally warm temperatures curled around the Gulf, helping Baton Rouge and New Orleans reach their warmest Februaries on record.

Meanwhile, a ribbon of toasty sea surface temperatures streamed north through the Straits of Florida supporting record-setting warmth over parts of the Florida peninsula.

Miami and Fort Lauderdale both posted their warmest winters on record. Climate Central, a nonprofit science communications firm in Princeton, N.J., found 80 percent of the winter days in Miami, Orlando and Tampa were above normal.

[Forty years ago Miami saw its only snow. These days, it’s simmering in record heat.]

Brian McNoldy, a tropical weather researcher at the University of Miami, said that in addition to the warm water temperatures, a lack of cold fronts penetrating into Florida played a big role in the warmth. “We’ve not had strong, long-lasting cold fronts make it this far south,” he said.

Effects of warm Gulf waters on thunderstorms and hurricanes

The warm water temperatures in the Gulf of Mexico, in particular, could mean that thunderstorms that erupt over the southern and central United States are more severe this spring. Berger explained in his Ars Technica piece: “While the relationship is far from absolute, scientists have found that when the Gulf of Mexico tends to be warmer than normal, there is more energy for severe storms and tornadoes to form than when the Gulf is cooler.”

A study published in the journal Geophysical Research Letters in December found: “The warmer (cooler) the Gulf of Mexico sea surface temperatures, the more (less)  hail and tornadoes occur during March–May over the southern U.S.”

Victor Gensini, a professor of meteorology at the College of DuPage, agreed that the warm Gulf could intensify storms this spring but cautioned that additional ingredients will need to come together. “The water is only one piece,” he said.

An additional key component for severe thunderstorms is a phenomenon known as the elevated mixed layer, a zone of hot and dry air at high altitudes that develops over Mexico’s high plateau and can flow into the southern and central United States. When it interacts with the warm, moist air from the Gulf, the resulting instability can give rise to explosive thunderstorms.

“This year we have both ingredients,” Gensini said. “With them coming together, we’re already seeing tornado levels as high as they’ve been since 2008.”

Another favorable ingredient for severe weather this spring is the configuration of water temperatures in the eastern Pacific Ocean.  When there is a warm pool of water off the coast of Peru (which has contributed in extreme flooding there) and a cold pool off the U.S. West coast, such a pattern strongly correlates with high tornado activity, according to research conducted at the National Oceanic and Atmospheric Administration.

Gensini, who leads a team that produces severe weather outlooks up to three weeks into the future, is calling for above-average thunderstorm activity for the week beginning March 26, with high confidence.

A vigorous jet stream disturbance, originating from the Pacific Ocean, will crash into the southwestern United States around March 28. Once it enters the Plains around March 29 and March 30, it is likely to tap into the warm Gulf water and encounter the elevated mixed layer. Then severe storms may erupt. 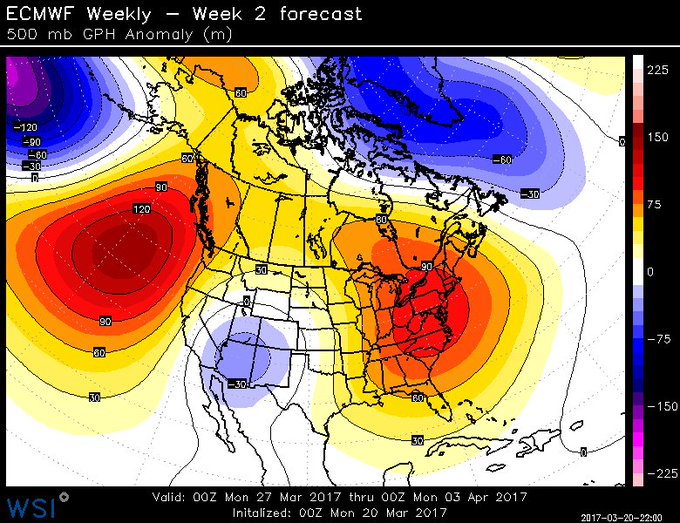 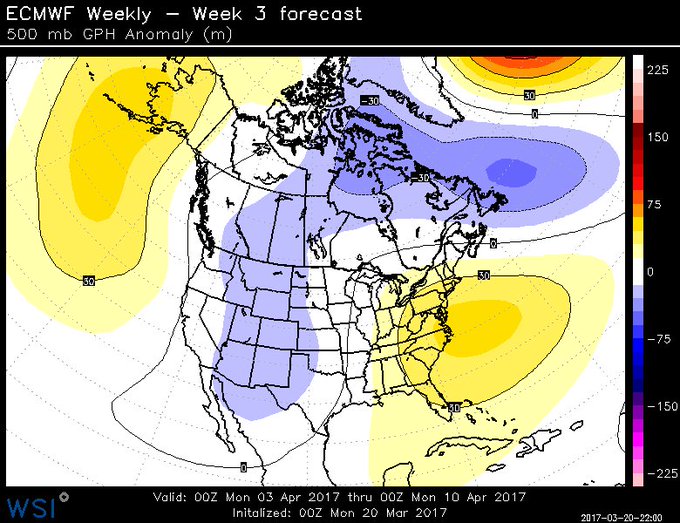 Such conducive environments for severe weather may increase due to climate change, Gensini said, although he expects high year-to-year to variability — something already being observed.

Jason is the Washington Post’s weather editor and Capital Weather Gang's chief meteorologist. He earned a master's degree in atmospheric science, and spent 10 years as a climate change science analyst for the U.S. government. He holds the Digital Seal of Approval from the National Weather Association.
Follow @capitalweather
source: https://www.washingtonpost.com/
original story HERE
Get the new Climageddon book: