HALLELUJAH! TRUMP KEEPING 'OPEN MIND' ON PULLING OUT OF CLIMATE ACCORD... 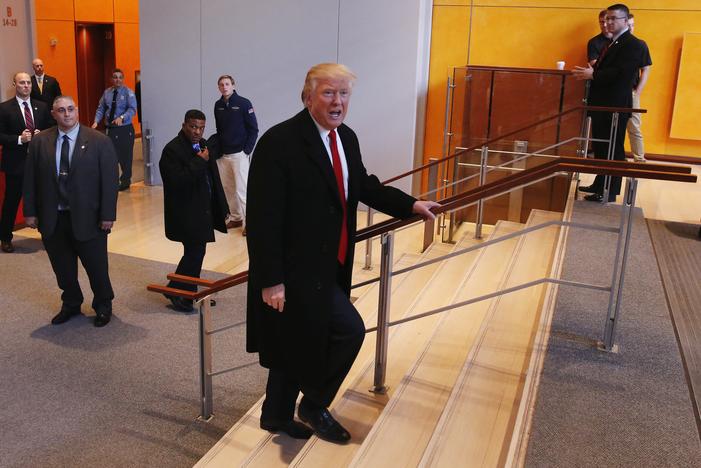 U.S. President elect Donald Trump walks up a staircase to depart the lobby of the New York Times building after a meeting in New York, U.S., November 22, 2016. REUTERS/Lucas Jackson
U.S. President-elect Donald Trump said on Tuesday he was keeping an open mind on whether to pull out of a landmark international accord to fight climate change, in a softening of his stance toward global warming...

Trump told the New York Times in an interview that he thinks there is "some connectivity" between human activity and global warming, despite previously describing climate change as a hoax.

A source on Trump's transition team told Reuters earlier this month that the New York businessman was seeking quick ways to withdraw the United States from the 2015 Paris Agreement to combat climate change.

But asked on Tuesday whether the United States would withdraw from the accord, the Republican said: “I’m looking at it very closely. I have an open mind to it."

A U.S. withdrawal from the pact, agreed to by almost 200 countries, would set back international efforts to limit rising temperatures that have been linked to the extinctions of animals and plants, heat waves, floods and rising sea levels. .

Trump, who takes office on Jan. 20, also said he was thinking about climate change and American competitiveness and "how much it will cost our companies,” he said, according to a tweet by a Times reporter in the interview.

Two people advising Trump’s transition team on energy and environment issues said they were caught off guard by his remarks.

A shift on global warming is the latest sign Trump might be backing away from some of his campaign rhetoric as life in the Oval Office approaches.

Trump has said he might have to build a fence, rather than a wall, in some areas of the U.S.-Mexican border to stop illegal immigration, tweaking one of his signature campaign promises.

Also in Tuesday's interview, he showed little appetite for pressing investigations of his Democratic rival in the presidential campaign, Hillary Clinton.

“I don’t want to hurt the Clintons, I really don’t. She went through a lot and suffered greatly in many different ways," he told reporters, editors and other newspaper officials at the Times headquarters in Manhattan.

But Trump said "no" when asked if he would rule out investigating Clinton over her family's charitable foundation or her use of a private email server while she was U.S. secretary of state during President Barack Obama's first term.

If Trump does abandon his campaign vow to appoint a special prosecutor for Clinton, it will be a reversal of a position he mentioned almost daily on the campaign trail, when he dubbed his rival "Crooked Hillary," and crowds at his rallies often chanted: "Lock her up."

The FBI investigated Clinton's email practices, concluding in July that her actions were careless but that there were no grounds for bringing charges.

The Clinton Foundation charity has also been scrutinized for donations it received, but there has been no evidence that foreign donors obtained favors from the State Department while Clinton headed it.

Trump, a real estate developer who has never held public office, brushed off fears over conflicts of interest between his job as president and his family's businesses.

"The law's totally on my side, the president can't have a conflict of interest," he told the New York Times. My company's so unimportant to me relative to what I'm doing," Trump said.

When asked whether House of Representatives Speaker Paul Ryan and other Republicans in Congress would consider his trillion-dollar infrastructure plan, Trump boasted he was popular with the party's leaders on Capitol Hill.

After lambasting Obama for months as a failed leader unfit to be president, the Republican president-elect found kinder words on Tuesday for the man he will succeed in the White House.

"I didn't know if I'd like him. I probably thought that maybe I wouldn’t, but I did. I really enjoyed him a lot," Trump said in the Times interview.