HARVEY, THE STORM THAT HUMANS HELPED CAUSE... 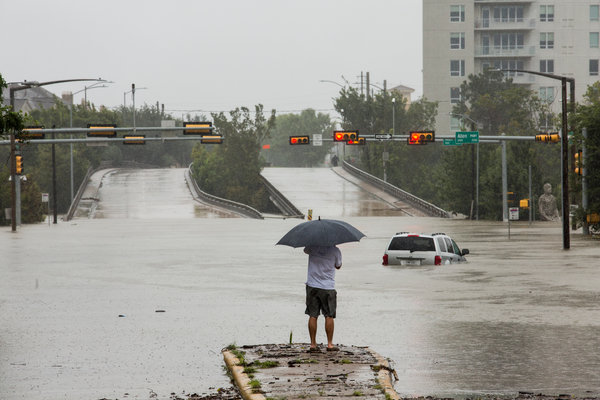 A Houston street on Monday. Scott Dalton for The New York Times
Even before the devastation from Harvey, southeastern Texas was enduring a year unlike any before...

The daily surface temperature of the Gulf of Mexico last winter never dropped below 73 degrees. You can probably guess how many previous times that had happened: Zero.

This sort of heat has a specific effect on storms: Warmer weather causes heavier rainfall. Why? When the seas warm, more moisture evaporates into the air, and when the air warms — which has also been happening in Texas — it can carry more moisture.

The severity of Harvey, in other words, is almost certainly related to climate change.

Yes, I know the sober warning that’s issued whenever an extreme weather disaster occurs: No individual storm can be definitively blamed on climate change. It’s true, too. Some version of Harvey probably would have happened without climate change, and we’ll never know the hypothetical truth.

But it’s time to shed some of the fussy over-precision about the relationship between climate change and weather. James Hansen, the eminent climate researcher, has used the term “scientific reticence” to describe this problem. Out of an abundance of academic caution — a caution that is in many ways admirable — scientists (and journalists) have obscured climate change’s true effects.

Yet smoking, drunken driving and seatbeltless riding each created a public health crisis. Once the link became clear and widely understood, people changed their behavior and prevented a whole lot of suffering.

Climate change is on its way to becoming a far worse public health crisis than any of those other problems. Already, it has aggravated droughts, famines and deadly heat waves. In the United States, global warming seems to be contributing to the spread of Lyme disease.

Now we have Harvey. It has brought yet another flood that’s being described as unprecedented. It is terrorizing thousands of Texans and submerged large parts of the nation’s fourth-largest city, Houston.

The immediate priorities, of course, are protection and rescue, and many Texans are rising to the moment. Houston has a certain friendly swagger, a mix of old Texas and new, and it’s evident this week. Residents are checking up on neighbors and saving people they’d never met before. The stories are inspiring.

Obviously, some extreme weather events are unrelated to climate change. But a growing number appear to be related, including many involving torrential rain, thanks to the warmer seas and air.

“The heaviest rainfall events have become heavier and more frequent, and the amount of rain falling on the heaviest rain days has also increased,” as the National Climate Assessment, a federal report, found. “The mechanism driving these changes,” the report explained, is hotter air stemming from “human-caused warming.”

Heavier rain can then interact with higher sea levels to increase flooding, as seems to have happened with Harvey. In Houston’s particular case, a lack of zoning laws has led to an explosion of building, which further worsens flooding. The city added 24 percent more pavement between 1996 and 2011, according to Samuel Brody of Texas A&M, and Houston wasn’t exactly light on pavement in 1996. Pavement, unlike soil, fails to absorb water.

Add up the evidence, and it overwhelmingly suggests that human activity has helped create the ferocity of Harvey. That message may be hard to hear — harder to hear, certainly, than stories of human kindness that is now mitigating the storm’s toll. But it’s the truth.

Beyond Harvey, the potential damage from climate change is terrifying. Disease, famine and flooding of biblical proportions are within the realm of possibility. Unfortunately, stories of potential misery have not been enough to stir this country to action. They haven’t led to a Manhattan Project for alternative energy or a national effort to reduce carbon emissions.

So when we are faced with actual misery that stems in part from climate change, we should be honest about it.

What’s happening in Texas is heartbreaking, and yet it will be a more frequent part of modern life unless we do something about it. That, ultimately, is the most compassionate message about Harvey.