How temperatures across the contiguous U.S. compared to normal during June 2016.
Click image to enlarge. Credit: NOAA

Thanks in part to the epic heat wave that sent temperatures skyrocketing in the Southwest, last month was the hottest June on record for the contiguous U.S., the National Oceanic and Atmospheric Administration announced Thursday...

June was 3.3°F above the 20th century average of 68.5°F, beating the previous record set in 1933 by 0.2°F, according to NOAA data. That bump of heat comes amid what is the hottest year to date by a good margin for the world as a whole.

Outside of the contiguous U.S., Alaska continued to bake, with its ninth warmest June and by far warmest year-to-date.

This was the first record hot month for the Lower 48 this year, and it boosted the year-to-date temperature to 3.2°F above the 20th century average. That means that at the halfway point of the year, the U.S. is having its third warmest year-to-date, up from the fourth spot at the end of May.

While temperatures were above average across the contiguous states, they were particularly so across much of the West and the Central Plains. In particular, “the record-breaking heat wave in the Southwest during June played an important role in boosting the contiguous U.S. average temperature to record territory,” Jake Crouch, a climatologist with NOAA’s National Centers for Environmental Information, said in an email.

During that heat wave, temperatures in parts of California, Arizona and Nevada surged to record highs. Palm Springs, Calif., hit a record high 120°F on June 20. On the same day, Phoenix didn’t drop below 90°F, the earliest that has ever happened.

The temperature for the Lower 48 is likely to stay in the top ranks through July, given the heat wave impacting a large swath of the country and the forecast for continued above-average temperatures across most areas.

“The continuation of warm temperatures into July will likely cause the year-to-date temperature to go higher, or at least stay near the same rank, when we reassess conditions in early August,” Crouch said. 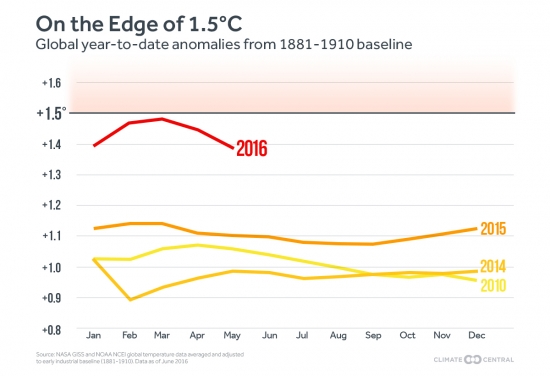 Globally, 2016 is far ahead of the top three hottest years — 2015, 2014, and 2010 — through the end of May and is poised to break the record. While an exceptionally strong El Niño helped boost temperatures, it is primarily the excess heat trapped by greenhouse gases that is making record hot months and years more and more likely, both globally and for the U.S.

Global warming is having outsize impact on Arctic temperatures, which are warming much faster than those for the planet as a whole. That includes Alaska, which is having its hottest year on record by far through the first half of the year.

Alaska’s average temperature is a stunning 9°F above the 1925-2000 average for the January-June period. That bests the previous record warm January-June (in 1981) by 2.5°F.

Temperatures across the state are expected to continue to be above-average for the rest of the summer.