HERE’S WHAT CHINA, U.S. JUST COMMITTED TO ON CLIMATE... 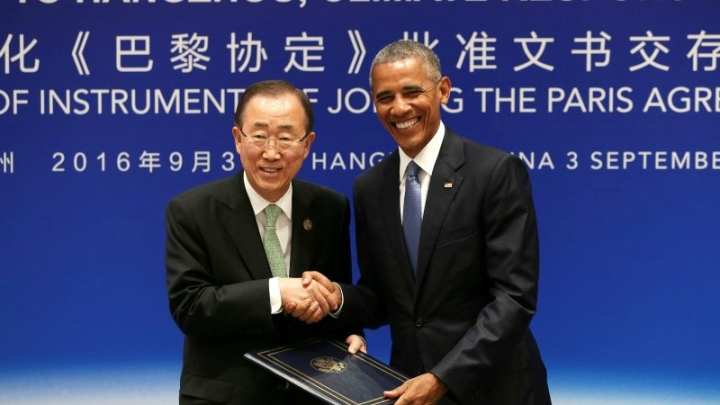 The leaders of the U.S. and China committed their nations to the fight against global warming on Saturday when they handed arcane but momentous documents to the United Nation’s top official...

The documents stated that the U.S. and China are ready to join a new global warming pact, putting it on course to potentially become international law before the end of 2016.

Largely because of global warming, this year is expected to be the hottest year on record, beating a heat record set last year, which beat the record set the year prior.

“We have a saying in America — that you need to put your money where your mouth is,” President Obama said during the joint media appearance in China before G20 meetings began. “And when it comes to combatting climate change, that’s what we’re doing, both the United States and China. We’re leading by example.”

Leading — but how? The legal details are wonky but critical. Their story begins in Paris, and it doesn’t end in China. Let us explain.

Finalized during U.N. talks in Paris in December, the agreement sets out steps that each country will take to tackle global warming. China and the U.S. are the world’s worst climate polluters, and the actions they have pledged are seen as crucial to the success of the pact.

In Paris, the U.S. agreed to reduce the amount of greenhouse gas pollution it releases in 2025 to about a quarter below its 2005 levels. China agreed to halt the growth in its annual greenhouse gas emissions by 2030 — something it appears to have already achieved.

Even if those and other nations’ promises under the Paris agreement are kept, global temperatures may yet soar well above 2°C (3.6°F) compared with pre-industrial times — roughly twice the amount of warming recorded so far. Further climate negotiations in the years ahead will aim to keep warming below that dangerous level.

What did Obama just do?

To formally join the Paris agreement, a country must file an “instrument of ratification” with the United Nations. This is a signed letter or document confirming that a country is ready to start living up to its commitments under the pact.

America could have sent a bureaucrat to U.N. headquarters in New York to quietly file such a letter. Instead, Obama handed America’s instrument of ratification directly to U.N. secretary general Ban Ki-moon in front of the world’s press before meetings in China.

The high-profile ceremony was designed to send a signal to the world that its two biggest climate polluters remain committed to working together to solve the climate crisis, such as by supporting and promoting solar and wind energy, which could encourage others to do the same.

Is the Paris agreement an international treaty?

The Paris agreement is a binding treaty under the UN. But Americans use the word “treaty” to describe an international agreement that the U.S. Senate has agreed to join. Since Obama hasn’t sought the blessing of the Senate for the new climate pact, the White House has been shying away from the use of the word “treaty.”

Has the U.S. joined the Paris agreement now?

By submitting its instrument of ratification, the U.S. has indicated that it is ready to join the Paris agreement. After a number of other countries have done likewise, the agreement will “take force.”

What does take force mean?

Once an international agreement takes force, countries agree to begin enforcing the rules of it within their own borders. The UN is an organization, not a government, and it can’t force the U.S. or any other country to take measures to protect the climate. But countries that flout global agreements risk being ostracized or punished through embargoes and trade agreements.

When will the Paris agreement take force?

If at least 55 countries, collectively producing at least 55 percent of global climate pollution every year, file their instruments of ratification by Oct. 7, then the Paris agreement will take force for those countries before the next round of climate talks, scheduled for November. That currently seems likely.

“Entry into force is important, because if that were to fail, or be long delayed, that would sap confidence in the Paris process,” said David Victor, an international relations professor at UC San Diego. “It’s a visible sign of progress.”

If the Paris agreement takes force before the November talks, countries that have joined the agreement by that time will huddle during the negotiations in a new decision-making committee. That would give those countries more influence than others over how the agreement will be implemented during the years to come.

Why isn’t the Senate involved?

Under U.S. law, international agreements only require Senate approval if they force changes to domestic laws. In part because about half of the Senate publicly doubts climate science, the Paris agreement was legally crafted to allow Obama to sign it without Senate approval.

“More than 90 percent of international agreements the U.S. has joined have followed the same executive process the president just completed for the Paris Agreement, and did not require a trip through the Senate,” said Alex Hanafi, an attorney at the nonprofit Environmental Defense Fund.

Some aspects of the Paris agreement are legally binding — such as requirements that countries publish information about their pollution levels each year, and what they’re doing to try to reduce that pollution. 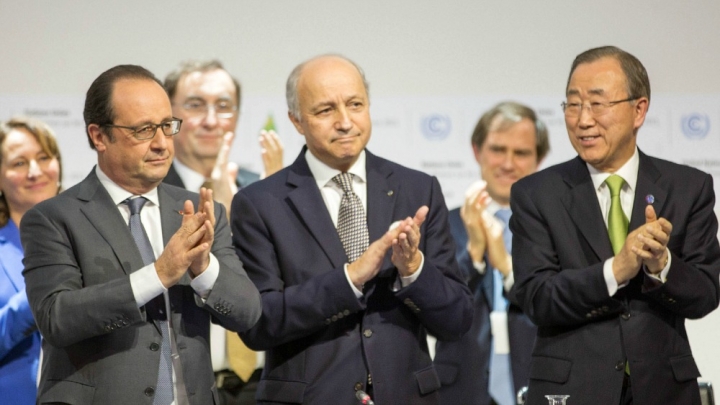 These are already requirements under existing U.S. law, and they could give other countries confidence that Americans are living up to their promises.

“Transparency is critical to accountability in international agreements,” Hanafi said. “The force of international law to compel countries to comply with their agreements is limited.”

Other aspects of the Paris agreement are not legally binding. Most notably, hitting a pollution target that a country set for itself under the agreement remains entirely voluntary.

Not only do non-binding pollution goals circumvent the potential need for Senate approval of the Paris agreement, many experts say they could lead to better results. That’s because the approach encourages countries to aim for difficult goals without fear of being punished if they fail.

As greenhouse gases have piled up in the atmosphere, climate change has shifted from being a theory about a future threat to a hazardous fact of modern life. Temperatures have risen nearly 2°F since pre-industrial times, and the effects on droughts, heatwaves and floods are becoming clear around the world.

But this is about more than just science and the fate of humanity. Obama is working to establish a climate legacy before he leaves office in January. Democrats facing reelection are finding broad, if tepid, electoral support for efforts to slow global warming.

Although Obama seemingly paid little attention to climate change during his first term, climate action has been a defining focus of his second term. Obama’s diplomats played crucial roles in encouraging other countries to show high levels of ambition during the Paris negotiations.

There’s also the question of Obama’s successor. If voters elect Democrat Hillary Clinton, America’s newfound global leadership on climate action is unlikely to change much. If Republican Donald Trump is voted into office, the U.S. could quickly abandon that leadership, as Trump has said global warming is a hoax.

Could a Trump administration withdraw the U.S. from the Paris agreement?

If the Paris agreement takes legal force this year, it would be difficult for the U.S. to withdraw from it before four years have passed — the length of a presidential term. Of course, that doesn’t mean that a Trump administration would be forced to take climate change seriously.

“Speculation on this point comes with a huge dose of uncertainty because of Mr. Trump’s unpredictability,” said Robert Stavins, a Harvard economics professor who is an expert on global environmental agreements.

As president, Trump “could simply not work hard to achieve” America’s goals under the Paris agreement, Stavins said. He could also appoint a Supreme Court justice who would help to invalidate the federal pollution rules that are key to achieving America’s commitments.

Even without withdrawing from the Paris agreement, “Trump could all but ensure that the U.S. [climate pledge] would not be achieved,” Stavins said.

Could the Paris agreement end up saving the world?

The new agreement puts global pressure on countries to clean up their heavy industries and to protect the climate, but it contains huge gaps. It doesn’t directly affect international shipping or aviation, both of which are heavy polluters, for which separate agreements are being pursued. Efforts to reduce a potent type of climate pollution released from refrigerators and air conditioners are being pursued through negotiations under yet another agreement.

“Of course, the Paris Agreement alone won’t solve the climate crisis,” Obama said on Saturday. “But it does establish an enduring framework that enables countries to ratchet down their carbon emissions over time, and to set more ambitious targets as technology advances.”

Editor's note — this story was updated to clarify that it would be difficult, but not impossible, for the U.S. to withdraw from the Paris agreement within four years of it taking force.