HERMINE IS NO SANDY—IT COULD BE EVEN WORSE...

A resident inspecting the seawall near his house in Holmes Beach, Florida as Hermine prepares for landfall on September 1, 2016. (Photo: Brian Blanco/Getty Images)

New York City is probably in the clear, but the storm could prove catastrophic for some parts of coastal New Jersey...

There’s a hurricane-strength storm headed for the Mid-Atlantic, and meteorologists are getting very, very worried. Hermine, now officially designated a Post-Tropical Cyclone — the same designation as Sandy — could bring a historic impact over the holiday weekend and well into next week.

At 11 a.m. EST on Saturday, the National Hurricane Center upgraded a 250-mile stretch of the Mid-Atlantic coast to a storm surge warning, predicting coastal water levels three to five feet above normal — among the highest ever recorded — should Hermine’s closest approach coincide with high tide. In its warning message, the National Hurricane Center said “there is a danger of life-threatening inundation in the next 36 hours from Chincoteague, Virginia, to Sandy Hook, New Jersey.” Those dire words, however, have only just begun to resonate with coastal communities: New Jersey Governor Chris Christie declared a State of Emergency for three coastal New Jersey counties early Saturday afternoon, as Hermine’s outer rain bands approached the shore.

In an emotional message posted on Friday, one Philadelphia-based meteorologist, Glenn Schwartz, said that Hermine is so far following a disastrous script that may prompt a “rerun” of Sandy for the New Jersey shore — except that Hermine is hitting on Labor Day weekend, when crowded beach communities have yet to spring into full-bore emergency mode. Schwartz would know: He used to design emergency management drills for the National Weather Service. In his Friday post, Schwartz wrote that “Hermine continues to behave exactly how a ‘worst-case scenario’ storm might behave.” In a technical discussion message on Saturday morning, the National Weather Service in New Jersey said Hermine has “all the ingredients of a nasty nor’easter.”

Hermine’s peak impact is predicted for the Sunday and Monday of Labor Day weekend, a popular beach holiday and important economic draw for coastal communities still recovering from Hurricane Sandy’s impact four years ago. New York City will close its beaches on Sunday, and some communities in New Jersey are doing the same, but no widespread coastal evacuations have been announced yet, as of midday Saturday.

To be clear, for northern New Jersey and the New York City area, Hermine will absolutely not be on the same scale as Sandy. In a worst-case scenario, Hermine will bring water levels of about 8.5 or nine feet above average low-tide levels to New York Harbor, whereas Sandy brought 14 feet. (The subways would flood at about 10.5 feet.) Still, the forecast for the Delmarva and southern New Jersey coastlines, where Hermine will likely have its strongest impact, holds a significant wild card: Hermine could bring record coastal flooding but only if its peak storm surge aligns with high tide — which will already be a bit higher than normal thanks to the new moon.

Another important point: Hermine’s center is not expected to make an official landfall — it will be a large and powerful ocean storm — which means the storm’s worst impacts will be felt immediately along the coast. The latest computer models show the storm passing as close as about 25 miles offshore on Sunday or Monday and then stalling within 100 miles of shore until at least Thursday — an exceptionally long time that will serve to worsen coastal flooding, especially for the coastal bays and estuaries that don’t normally fill with water from storms, and that take longer to drain.

This is Hermine’s greatest threat: Coastal flooding due to storm surge. The latest coastal water level models show Hermine may come within just a few inches — or exceed by a few inches — the worst coastal floods on record for ocean-facing parts of Maryland, Delaware, and southern New Jersey. What’s more, Hermine could cause coastal flooding through many high-tide cycles over a span of three to five days, which could lead to severe beach erosion, threatening coastal homes and infrastructure. On top of the rise in the level of the ocean, Hermine’s large diameter will help generate waves of 15 to 30 feet, which will further enhance the impact of the coastal flood.

Another major wild card, since Hermine’s exact position offshore over the next several days is still unknown, is how close its heaviest rainfall will come to the coastline. If Hermine tracks 25 to 50 miles further west of its current prediction, the National Weather Service warns that “significant, life threatening” amounts of rainfall, exceeding 10 inches in a day or so, could fall on coastal areas. That would be likely be enough to send rivers well into flood stage.

During its closest approach on Sunday and Monday, Hermine could also bring hurricane-force wind gusts to much of the Mid-Atlantic coast, and wind gusts of 40 to 50 miles per hour to major nearby cities like Philadelphia and New York City. These winds could wind up producing damage that could cause widespread power outages. 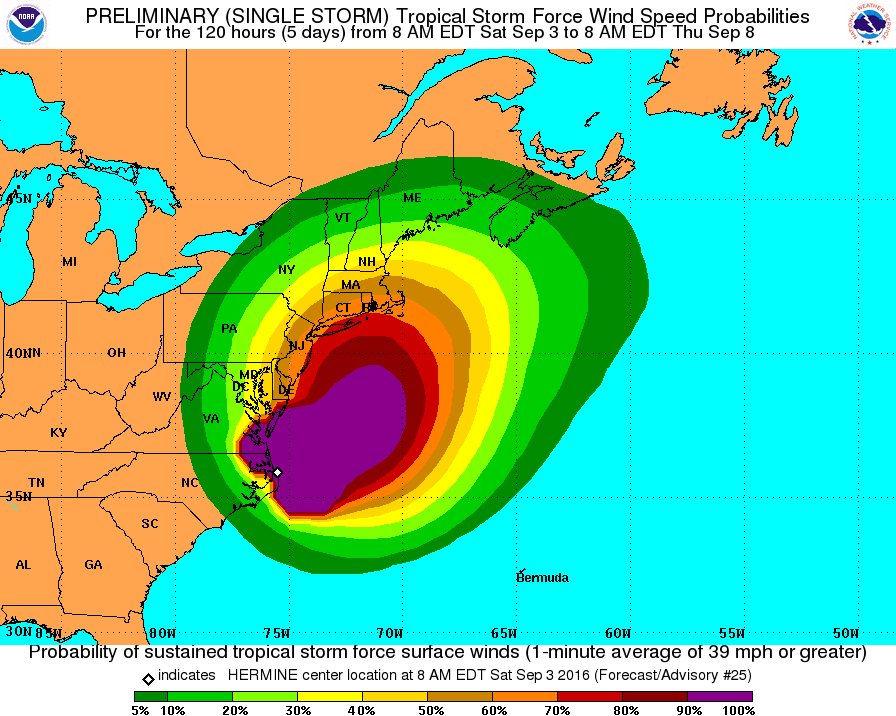 Hermine is now a post-tropical cyclone, a designation that was also used to describe Sandy’s hybrid, superstorm structure. The meteorology behind this transition is complicated, but my advice to coastal residents is simple: Prepare for a hurricane.