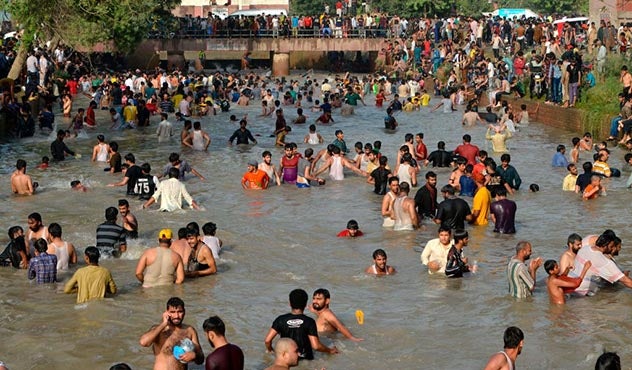 People cool themselves off in a water channel during a heat wave on June 4, 2017 in Lahore, Pakistan. Image credit: ARIF ALI/AFP/Getty Images.

The last week of May 2017 and first week of June brought one the most extraordinary heatwaves in world history to Asia, the Middle East and Europe. The mercury shot up to an astonishing 53.5°C (128.3°F) at Turbat, Pakistan on May 28, making it Earth’s hottest temperature ever recorded in the month of May—and one of Earth’s top-five hottest reliably-measured temperatures on record, for any month. Both Pakistan and Oman tied their all-time national heat records for any month during the heat wave, and all-time national heat records for the month of May were set in Iran, Norway and Austria....

During the last week of May, an impressive dome of overheated air with an isotherm of 35°C (95°F) at 850 hpa (approximately 5,000 feet) extended across the Strait of Hormuz near southern Iran and southwestern Pakistan. In places where this air was being forced downward, the extreme heat allowed for strong compressional warming that produced exceptional surface temperatures. On May 28, after a minimum temperature of 34.5°C (94°F), the high temperature in the Western Pakistani town of Turbat reached 53.5°C (128.3°F) in mid-afternoon. This tied the all-time highest temperature ever recorded in Pakistan, and the world record of highest temperature for May--both set in Moen Jo Daro on May 26, 2010 (not May 27 as wrongly reported in some media.)

There is a controversy about the correct maximum temperature in Turbat, though. It was reported by the Pakistan Meteorological Department as 53.5°C (the precision of the thermometer is 0.5°C, like in most Pakistani stations), but the temperature was later rounded to 54.0°C (129.2°F.) If that is correct, it would tie the highest reliable temperature ever recorded in the planet, the 54.0°C reading set on July 21, 2016 in Mitribah, Kuwait. Regardless, the 53.5°C reading at Turbat on May 28, 2017, ranks as one of Earth’s top five hottest reliably-measured temperatures on record; see Wunderground weather historian Chris Burt’s July 22, 2016 post, Hottest Reliably Measured Air Temperatures on Earth, for more information. The World Meteorological Organization, which is currently checking the reliability of the Mitribah thermometer, will also carry out an investigation on the reliability of the Turbat reading--and to find out whether this rounding from 53.5°C to 54.0°C makes sense.

In the following days, the intense heat moved down to Oman, where nearly half of the stations set their all-time highest temperatures. The most important of these records were the 50.8°C (123.4°F) recorded on May 30 at Qurayyat and on May 31 at Joba. These readings tie the national record of highest temperature ever recorded in Oman (previously set at Buraimi in July 1990 and at Sohar Majis in May 2009.)

In the United Arab Emirates, the difference of temperature between the atmosphere and the sea, together with the intense sea breeze, caused impressive differences in weather. Coastal areas were affected by thick fog, and even mist, but temperatures were very high on the mountain peaks. At one point, the temperature of the weather station on the Burj Al Khalifa Building in Dubai (625 meters above sea level) was 15°C (27°F) higher than that of coastal Dubai.

A dome of high pressure from Morocco extended over Western Europe beginning on May 24, then moved north and then east. As a result, monthly records of highest temperatures were widespread in Spain, France, Belgium, Netherlands, Ireland, Norway, Germany and Austria. Very high temperatures were also set in the Alps, with an amazing 5.8°C (42.4°F) on May 27 on the top of Italy’s Col Major (elevation 4750 meters or 15,584 feet), just at the side of Mount Blanc. In particular, two national records for the month of May were broken: in Norway with 32.2°C (90°F) at Tinnsjø on May 27, and in Austria with 35.0°C (95°F) at Horn on May 31.

An intense heat wave caused by downslope winds from the Laotian mountains towards the Vietnamese coast affected the area around Vietnam’s capital of Hanoi in early June, particularly between June 2 - 4. The central observatory of Lang on June 4 recorded 41.5°C (106.7°F), destroying its previous all-time record of 40.4°C, set in 1971. On June 4, the district of Ha Dong (which hosts an international weather station representative of Hanoi) recorded 42.5°C (108.5°F), by far the highest temperature ever recorded in the Hanoi area. (During the colonial times, unusually high values were recorded with stations affected by overexposure conditions, including the infamous record of 42.8°C in May 1926, which is believed to be unreliable--just like similar values recorded in Indochina in those years.) In the central area of Hanoi, near Hoan Kiem Lake, the humidity is usually higher than its surroundings, and the combination of temperatures as high as 41°C (105.8°F) with humidity values near 50% made the heat index an unbearable 55°C (131°F).

Dr. Jeff Masters co-founded Weather Underground in 1995, and flew with the NOAA Hurricane Hunters from 1986-1990.