HOLLANDE: US 'MUST RESPECT CLIMATE COMMITMENTS'... 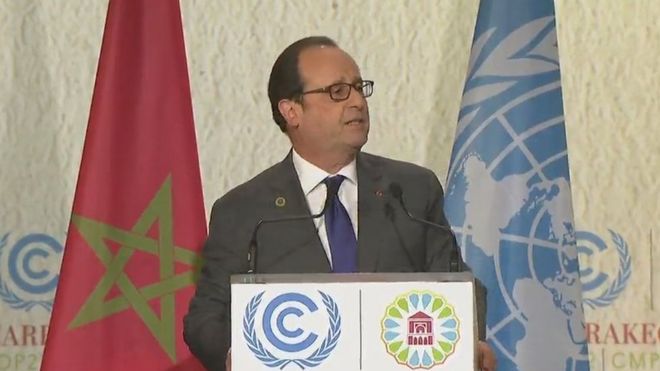 French president Francois Hollande says that the US must respect their commitments made under the Paris Climate Agreement...

Speaking at climate talks in Marrakech, Mr Hollande said that the pact was irreversible "in law and in fact".

President-elect Donald Trump has promised to withdraw the US from the treaty.

Mr Hollande said France would defend the deal in talks with the new US leader.

Heads of state and government have convened in Marrakech ostensibly to celebrate the coming into force of the Paris Climate Agreement and to be present at the first session of CMA1, the next step on from the Conference of the Parties (COPs) negotiations process that ultimately delivered the Paris deal.

Standing from the rather cumbersome, Conference of the Parties serving as the Meeting of the Parties to the Agreement, CMA1 was formally opened by the King of Morocco and attended by a number of global leaders including UN secretary general Ban Ki-moon.

Instead of working on the nuts and bolts of how to make the Paris agreement operational, the focus of this meeting has been on the US. Specifically, the promise of then Republican candidate for president, Donald Trump, to withdraw the US from the Paris agreement if he was elected.

Mr Ban told the meeting that he had spoken on the phone to Mr Trump and was looking forward to meeting with him. The pledge to pull out of Paris, Mr Ban believed, was campaign rhetoric.

"The global unity around climate change once seemed to be unthinkable and now it has become unstoppable," he told delegates.

"I hope that President-elect Trump will really hear and understand the seriousness and urgency of addressing climate change."

He hoped Mr Trump would make a "good and wise decision" to stay in the Paris agreement.

Mr Ban believed that Mr Trump's business background would help to convince him that cutting carbon and investing in renewables now made financial sense as well as being in the best interests of the Earth.

"My sense is that, as a very successful business person in the past, I believe that he understands that there are market forces at work on this issue and that we need to harness these forces for the good of the planet and all the species."

The French government has shown the great concern over the Trump promise, as they justifiably believe the Paris Agreement was moulded by their diplomacy. Countries cannot simply walk away from it, the French president told the meeting.

"This agreement is irreversible in law, it came into force on 4 November, more than 100 states accounting for more than two thirds of greenhouse gas emissions ratified it," he said.

"The US, the largest economic power in the world, and the second largest greenhouse gas emitter, must respect the commitments they have undertaken. It is not only their duty but in their interest as well."

According to President Hollande, corporations, citizens and governments the world over were committed to the Paris Agreement and he would ensure the new US president was made aware of this.

"France will lead this dialogue with the US and its new president in openness, in respect but with demands and determination on behalf of the 100 states that have ratified the Paris Agreement."

He called for greater ambition from the parties meeting here. In a world assailed by great threats from terrorism to poverty, the Paris Climate Agreement was a source of hope.

"It is proof that the international community can act to preserve that which is most dear to all of us."