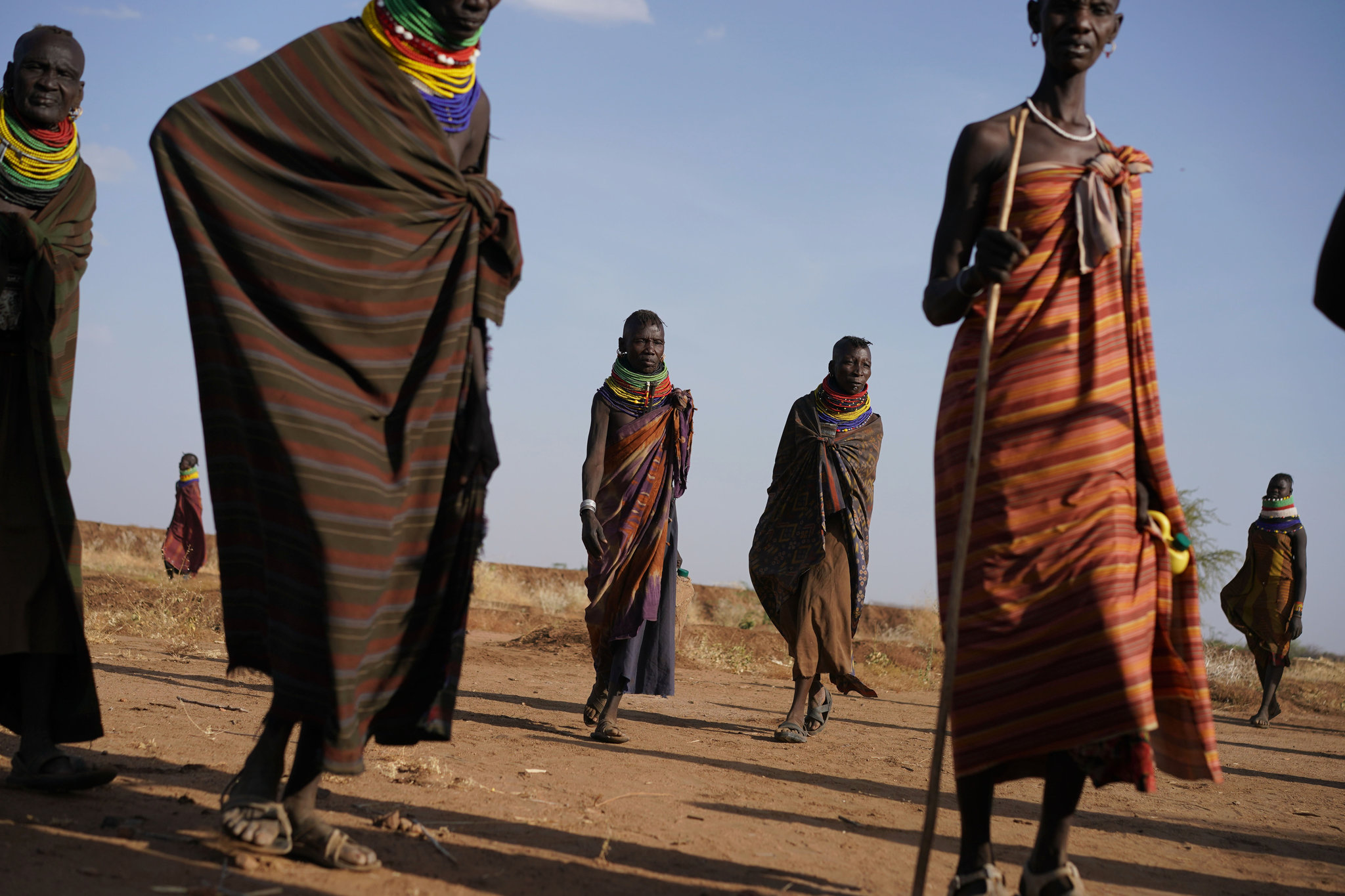 On the outskirts of Kakuma in northwestern Kenya. Always arid, the area has become hotter and drier with the onset of climate change. Joao Silva/The New York Times

KAKUMA, Kenya — These barren plains of sand and stone have always known lean times: times when the rivers run dry and the cows wither day by day, until their bones are scattered under the acacia trees. But the lean times have always been followed by normal times, when it rains enough to rebuild herds, repay debts, give milk to the children and eat meat a few times each week...

Times are changing, though. Northern Kenya — like its arid neighbors in the
Horn of Africa, where Secretary of State Rex W. Tillerson paid a visit last week,
including a stop in Nairobi — has become measurably drier and hotter, and scientists
are finding the fingerprints of global warming. According to recent research, the
region dried faster in the 20th century than at any time over the last 2,000 years.
Four severe droughts have walloped the area in the last two decades, a rapid
succession that has pushed millions of the world’s poorest to the edge of survival.
Amid this new normal, a people long hounded by poverty and strife has found
itself on the frontline of a new crisis: climate change. More than 650,000 children
under age 5 across vast stretches of Kenya, Somalia and Ethiopia are severely
malnourished. The risk of famine stalks people in all three countries; at least 12
million people rely on food aid, according to the United Nations. 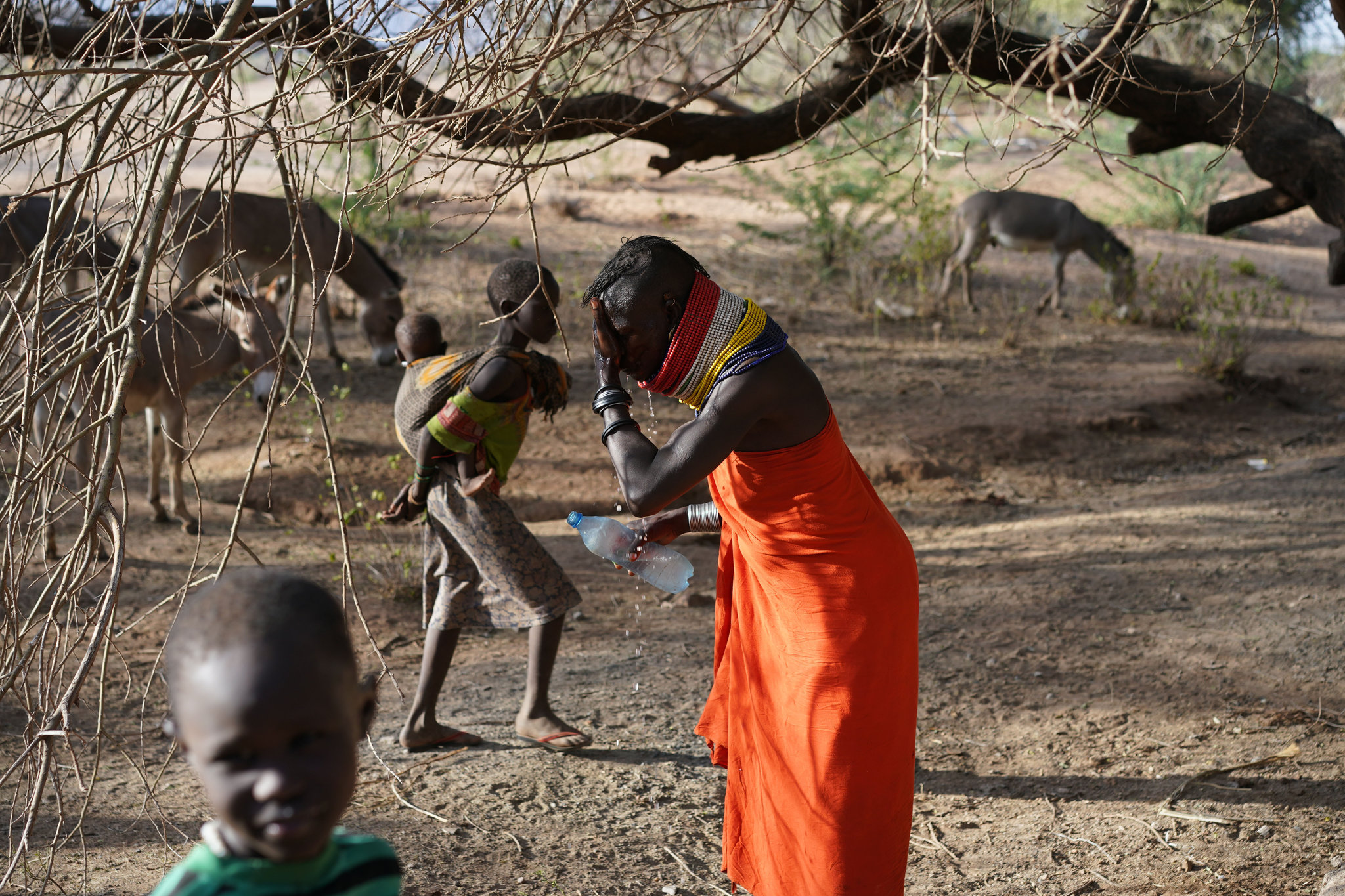 A woman washed near a water distribution point in Kakuma. Four droughts have hit the region in the last 20 years. CreditJoao Silva/The New York Times

A grandmother named Mariao Tede is among them. Early one recent morning, on
the banks of a dry stream, with the air tasting of soot and sand, Ms. Tede stood over
a pile of dark embers, making charcoal. A reed of a woman who doesn’t keep track of
her age, she said she once had 200 goats, enough to sell their offspring at the market
and buy cornmeal for her family. Raising livestock is traditionally the main source of
income in the region, because not much food will grow here.
Many of her goats died in the 2011 drought, then many more in the 2017
drought. How many were left? She held up five fingers. Not enough to sell. Not
enough to eat. And now, in the dry season, not even enough to get milk. “Only when
it rains I get a cup or two, for the kids,” she said.
The most recent drought has prompted some herders to plunder the livestock of rival
communities or sneak into nature reserves to graze their hungry droves. Water has
become so scarce in this vast county — known as Turkana, in northwestern Kenya —
that fetching it, which is women’s work, means walking an average of almost seven
miles every day.
Ms. Tede now gathers wood to make charcoal, a process that is stripping the
land of its few trees, so that when the rains come, if the rains come, the water will
not seep into the earth. On the roadside stood what were once sacks of food aid, now
stuffed with charcoal, waiting for customers. 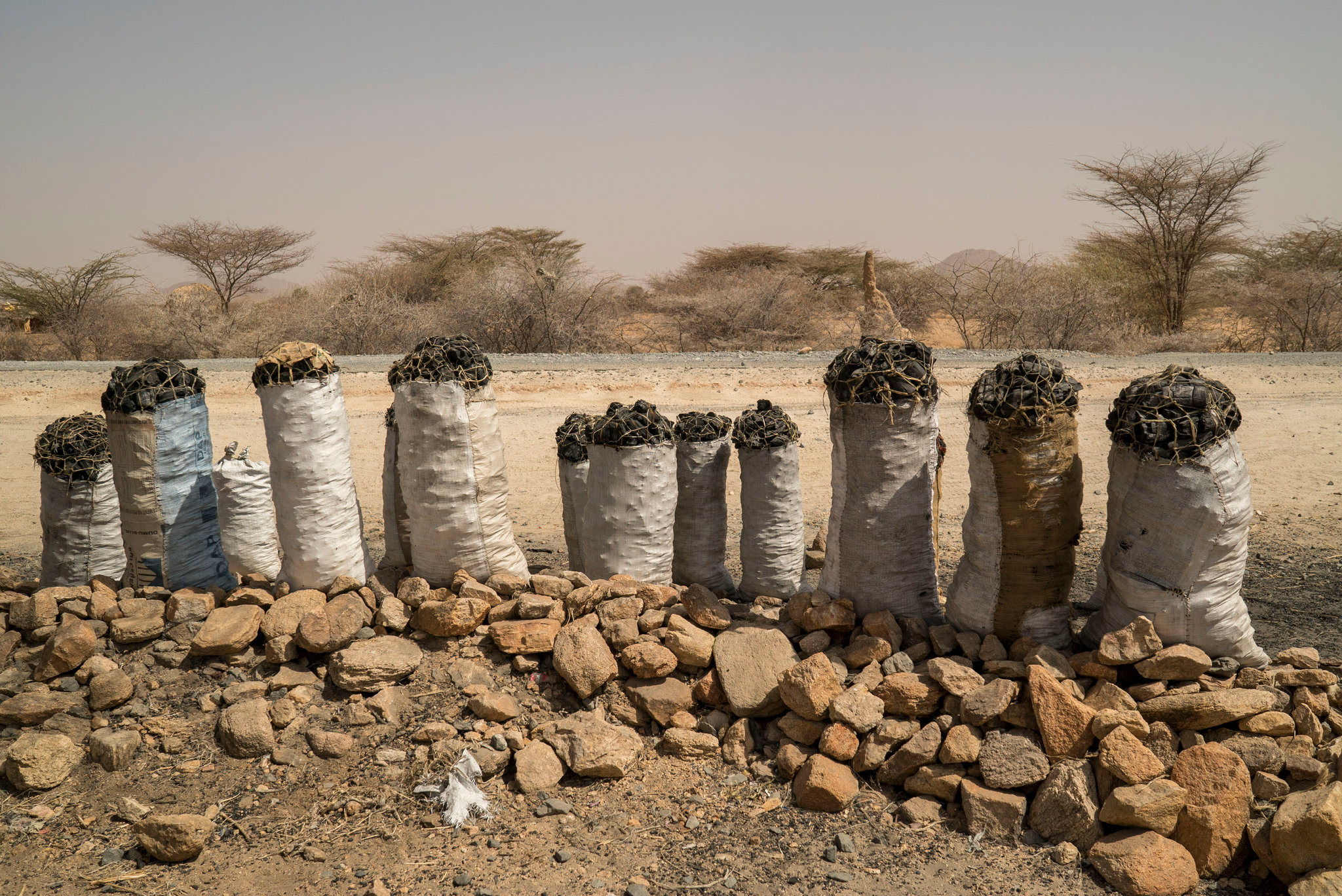 Charcoal for sale along the main road in Turkana County. Production is stripping the land of its few trees. CreditJoao Silva/The New York Times

Further along that same road, in a village blessed with a water pump, a herder
named Mohammed Loshani offered up his ledger of loss. From 150 goats a little over
a year ago, he had 30 left. During the 2017 drought, 10 died one month, a dozen the
next.
“If we get rain I can build back my herd,” he said. “If not, even the few I have
will die.” He knew no one who had rebuilt their herds to pre-2011 drought levels.
“If these droughts continue,” Mr. Loshoni said, “there’s nothing for us to do.
We’ll have to think of other jobs.” 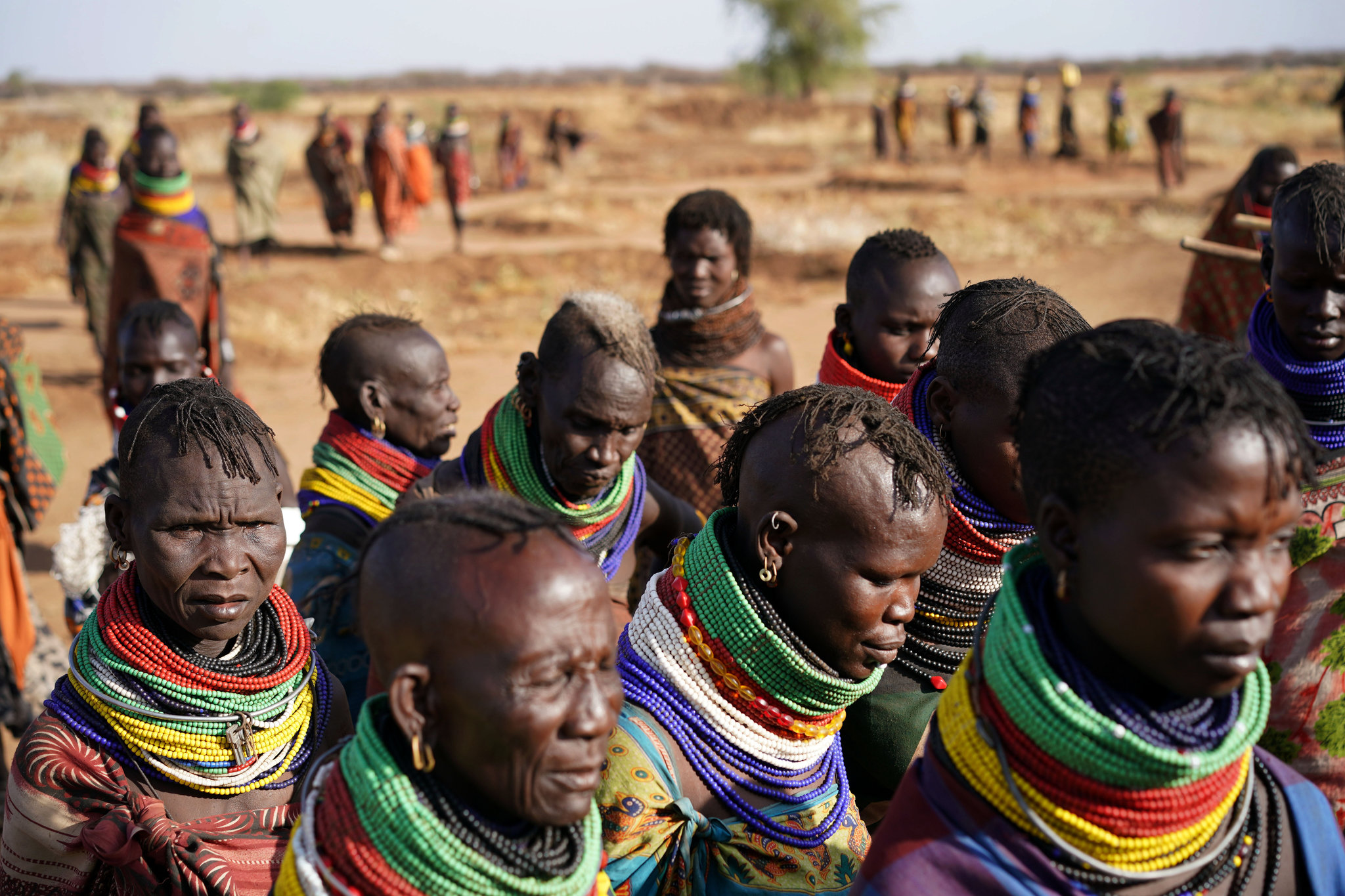 Women near Kakuma. Food is hard to grow in the region, so raising livestock is the main source of income. CreditJoao Silva/The New York Times

When Gideon Galu, a Kenyan meteorologist with the Famine Early Warning Systems
Network, or FewsNet, looks at 30 years of weather data, he doesn’t see doom for his
country’s herders and farmers. He sees a need to radically, urgently adapt to the new
normal: grow fodder for the lean times, build reservoirs to store water, switch to
crops that do well in Kenya’s soil, and not just maize, the staple.
Rainfall is already erratic. Now, he says, it’s getting significantly drier and
hotter. The forecast for the next rains aren’t good. “These people live on the edge,” he
said. “Any tilt to the poor rains, and they’re done.”
His colleague at FewsNet, Chris Funk, a climatologist at the University of
California, Santa Barbara, has linked recent drought to the long-term warming of the
western Pacific Ocean as well as higher land temperatures in East Africa, both
products of human-induced climate change. Global warming, he concluded, seems to
produce more severe weather disruptions known as El Niños and La Niñas, leading
to “protracted drought and food insecurity.”
Jessica Tierney, a paleoclimatologist at the University of Arizona, took the
longer view. By analyzing marine sediments, she and her colleagues came to the
conclusion that the region is drying faster now than at any time in two millenniums
and that the trend may be linked to human activity. That rapid drying in the Horn of
Africa, she wrote, is “synchronous with recent global and regional warming.” 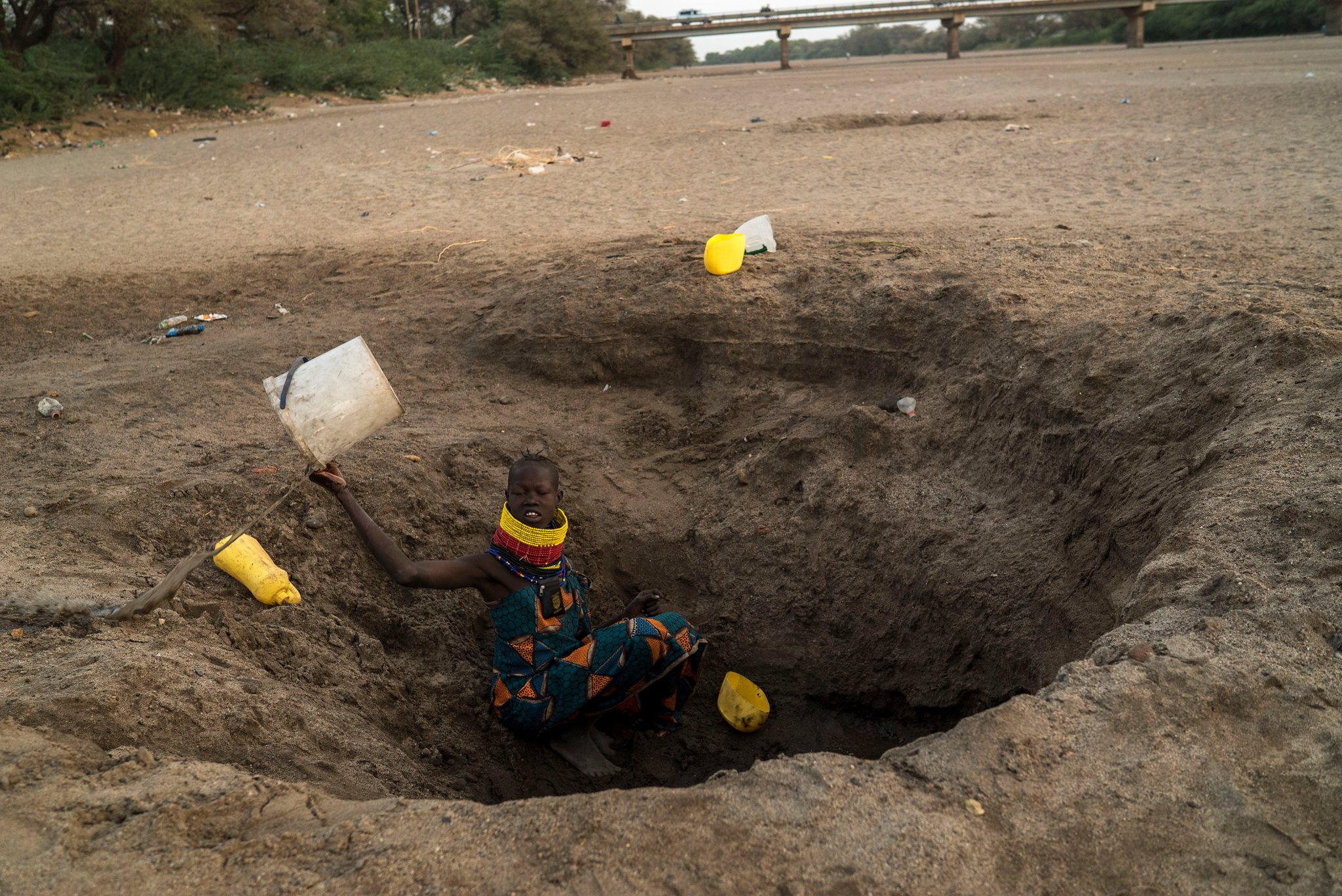 A woman collected water from a pit dug in a dry riverbed near Kakuma. CreditJoao Silva/The New York Times

It falls to James Oduor, the head of Kenya’s National Drought Management
Authority, to figure out what to do about the new reality. “In the future,” he said
flatly, “we expect that to be normal — a drought every 5 years.”
Mr. Oduor keeps a postcard-size, color-coded map of his country to explain the
scale of the challenge: dark orange for arid zones, light orange for semiarid zones,
and white for the rest.
More than three-fourths of the land, he points out, is dark or light orange, which
means they are water-stressed in the best of times and during droughts, dangerously
so. “The bigger part of my country is affected by climate change and drought,” he
said. “They’re frequent. They last long. They affect a big area.” 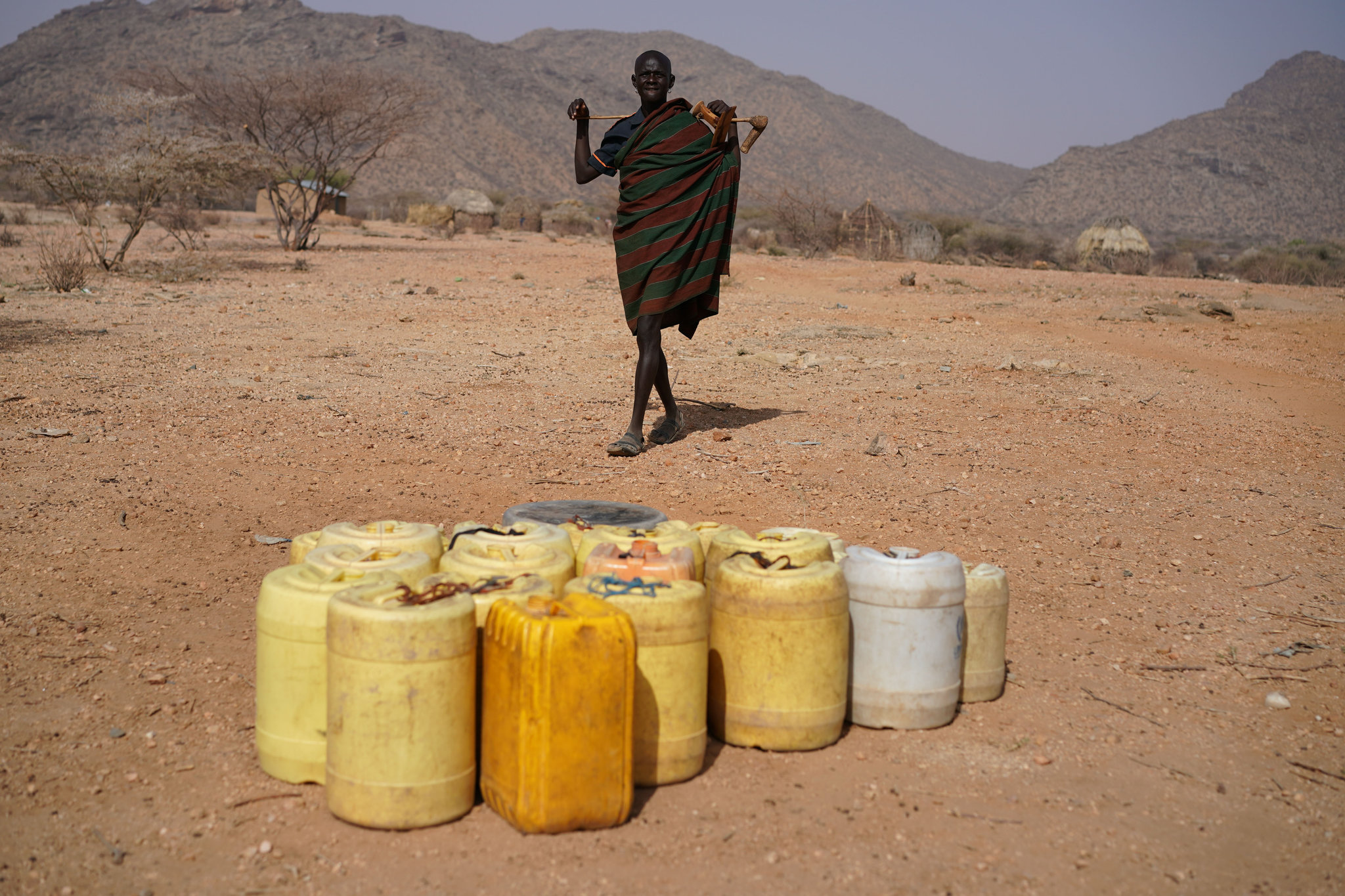 Ethiopia is even worse off. FewsNet, which is funded by the United States
government, has warned of continuing “food security emergency” in the country’s
southeast, where rains have failed for the last three years in a row and political
conflict has displaced an estimated 200,000 people.
In Somalia, after decades of war and displacement, 2.7 million people face what
the United Nations calls “severe food insecurity.” During the 2017 drought,
international aid efforts averted a famine. In the previous drought, in 2011, nearly
260,000 Somalis died of hunger, half of them children, the United Nations reported. 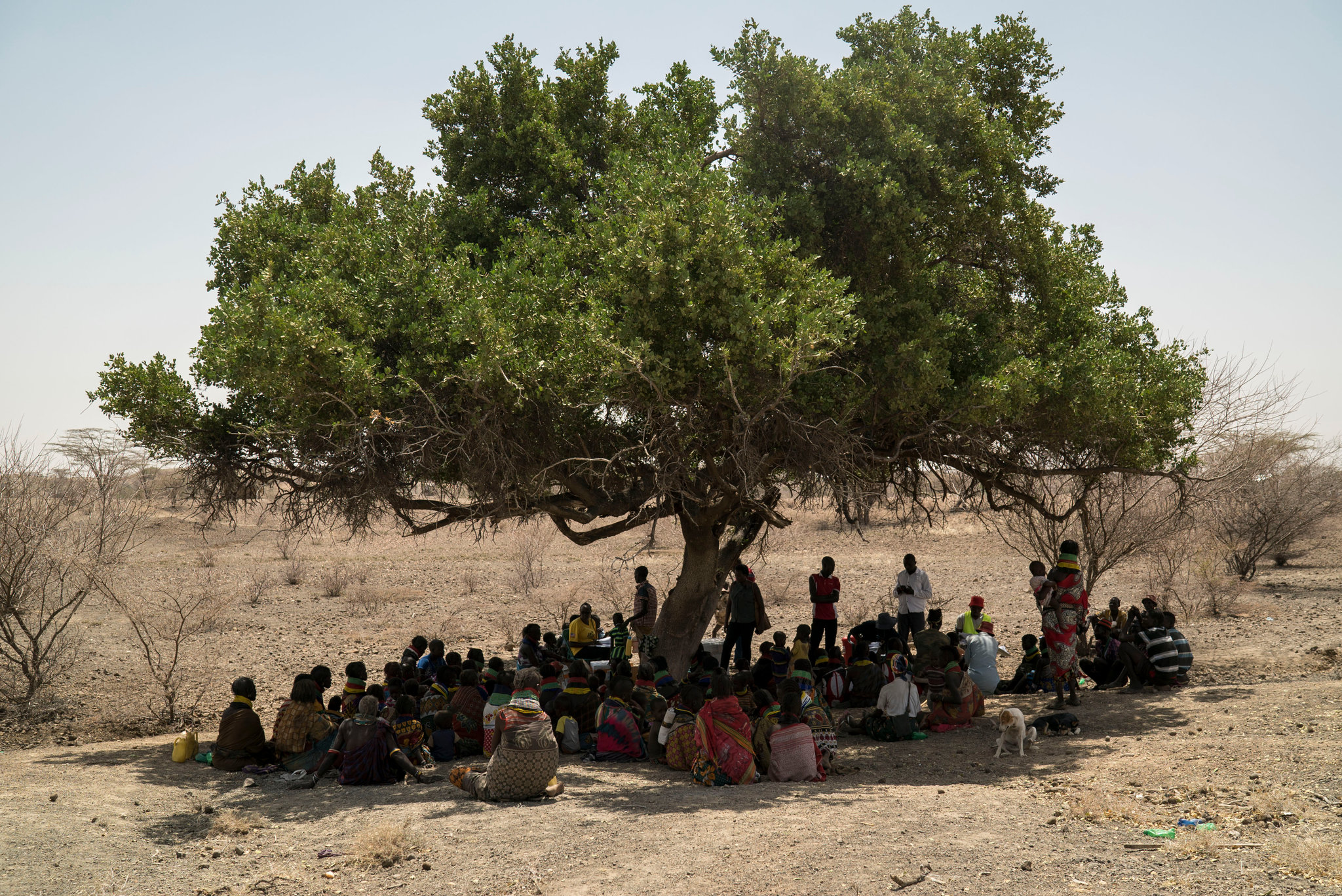 Women waited in the the shade in Turkana Country as an aid group evaluated children for malnutrition. CreditJoao Silva/The New York Times

I traveled across Turkana and neighboring Isiolo County in northern Kenya last
month. Off the main highway, sandy paths led through sandy plains. A cluster of
round twig-and-thatch huts emerged. Dust whipped through the air.
Pastoralists have walked these lands for centuries. The older ones among them
remember the droughts of the past. Animals died. People died. But then the rains
came, and after four or five years of normal rains, people living here could replenish
their herds. Now, the droughts are so frequent that rebuilding herds is pretty much
impossible.
“You wake up one morning and five are dead, then 10,” said David Letmaya, at a
clinic in Isiolo County where his family had come to collect sacks of soy and
cornmeal. 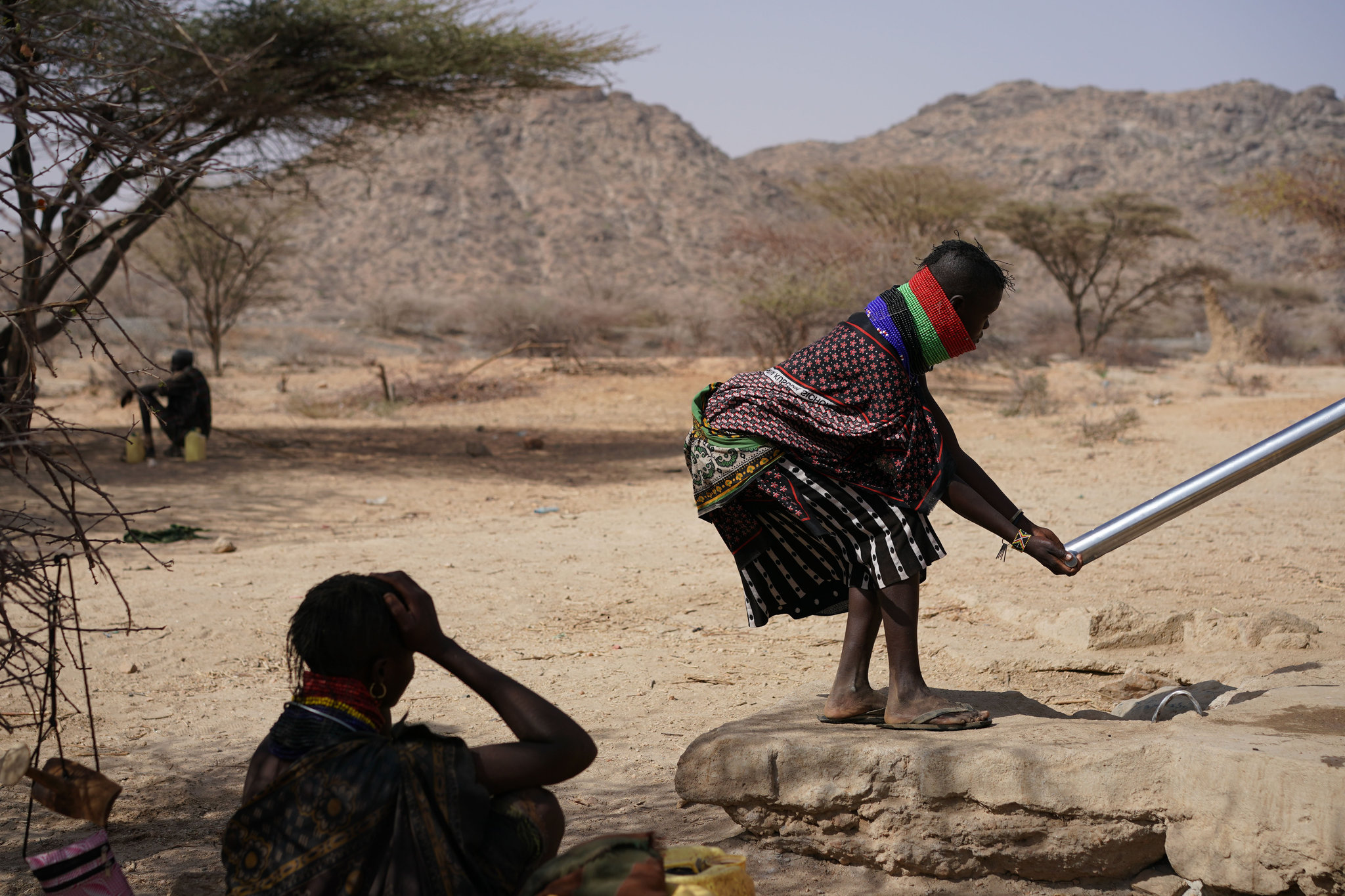 These days, shepherds like Mr. Letmaya range further and further, sometimes
clashing with rivals from Turkana over pasture and water, other times risking a
confrontation with an elephant or a lion from the national park next door.
Almost every night, park rangers can hear gunshots. Herders raid each others’
livestock to replenish their own.
At the Isiolo health center, everyone kept precise count of their losses. One
woman said she lost all three of her cows last year and was left now with only three
goats. A second said her husband was killed a few years ago in a fight with Turkana
herders over pasture, and then, last year, the last of her cows died. A third said she
lost 20 of her 30 goats in the last drought.

It was a blazing afternoon, with no respite in sight. One by one, hauling boxes of
soy and cornmeal bearing a World Food Program stamp, the women walked back
home across the dry plains and the dry riverbeds, resting sometimes under an acacia
heavy with nests that weaver birds had made from the dry brush.

A version of this article appears in print on March 12, 2018, on Page A1 of the New York edition with the
headline: Fastest Drying in 2,000 Years Imperils Millions.