HOUSTON, WE'VE GOT A PROBLEM. IT'S CALLED GLOBAL WARMING... 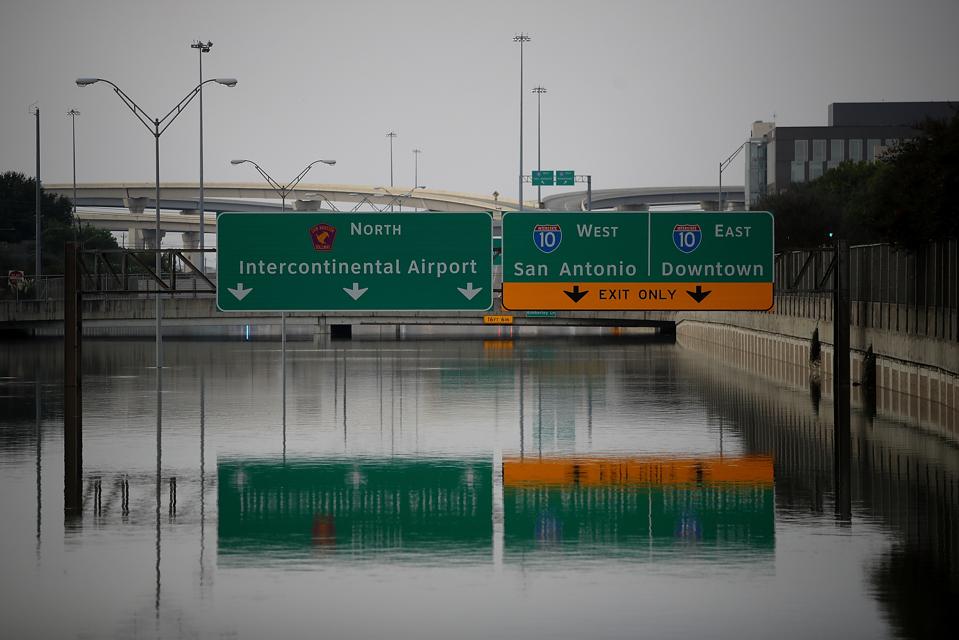 HOUSTON, TX - SEPTEMBER 03: A section of US-90 sits under 16 feet of water on September 3, 2017 in Houston, Texas. A week after Hurricane Harvey hit Southern Texas, residents are beginning the long process of recovering from the storm. (Photo by Justin Sullivan/Getty Images)

Hurricane Harvey poured more rain on Texas and Louisiana last week than this country has ever seen from a single storm. The city of Houston is now suffering from historic flooding, with many calling this a "1000-year flood." Congress is likely to pass a huge bailout bill in the coming days, starting with a $14.5 billion "down payment," suggesting much more is to come...

The storm's eventual costs could rise even higher than the costs of 2005's Hurricane Katrina, which cost $160 billion according to NOAA.

It's ironic that Texas (and Houston in particular) has an economy that is dominated by on oil and fossil fuels. Burning these fuels is what got us in this mess.

It's also ironic that Texas Senator Ted Cruz, who is now at the front of the line asking for a federal government rescue package, is a scientifically illiterate climate change denier. As I wrote shortly after he announced his candidacy for President in 2015, Cruz not only denied that global warming was happening, but he then went on to compare himself to Galileo, as if he were taking a brave and bold scientific position. Right.

A few facts: the Gulf of Mexico is 4 degrees warmer than normal this year, and it has been getting worse. Back in March of this year, the Washington Post's Jason Samenow reported that the Gulf was "freakishly warm, which could mean explosive springtime storms." Warm water feeds hurricanes, and Harvey feasted on it, sucking up energy and using it to dump ridiculous amounts of water onto south Texas.

Noted climate scientist Michael Mann, writing in The Guardian, took the slightly more nuanced position that "climate change made Hurricane Harvey more deadly." True enough: if you want to be strictly accurate, we can't prove that warming temperatures are the sole cause of Harvey. Maybe with cooler temperatures, we'd have had a hurricane anyway–but it would have been a far smaller one, and the damage would have been far less severe.

Mann also pointed out that global warming has already caused sea levels to rise over half a foot, which made the flooding in Houston significantly worse than it would have been otherwise.

Now it's time to rebuild, which raises a dilemma. The U.S. can't just abandon Houston, one of our country's largest cities, even if most of its residents deny the reality of global warming (and perhaps they don't). But given that global warming is well under way, with rising sea levels and warming oceans, more catastrophic flooding events like Harvey are highly likely. Should we pay to rebuild the city exactly as it was, basically ignoring the problems of floodwater management as Houston has done until now? Or should we use the government bailout funds to reduce the risk from future flooding?

Actually, it might do even more good to impose a simple requirement, before Texas gets any of our bailout funds. Let's require U.S. senators Ted Cruz and John Cornyn, and Texas governor Greg Abbot, to state publicly that global warming is real, that humans are making it worse, and that they will work in the future to mitigate the risks posed by continued climate change. Wouldn't that be something? A simple statement, nothing more, to unlock billions of dollars in aid.

If we just rebuild everything like before, then Houston will continue to have a problem.

Opinions expressed by Forbes Contributors are their own.

(*Note about the title of this article. The original quote was "Houston, we've had a problem," famously utterly by Apollo 13 astronaut Jim Lovell. In the movie Apollo 13, actor Tom Hanks (playing Lovell) instead said, "Houston, we have a problem.")