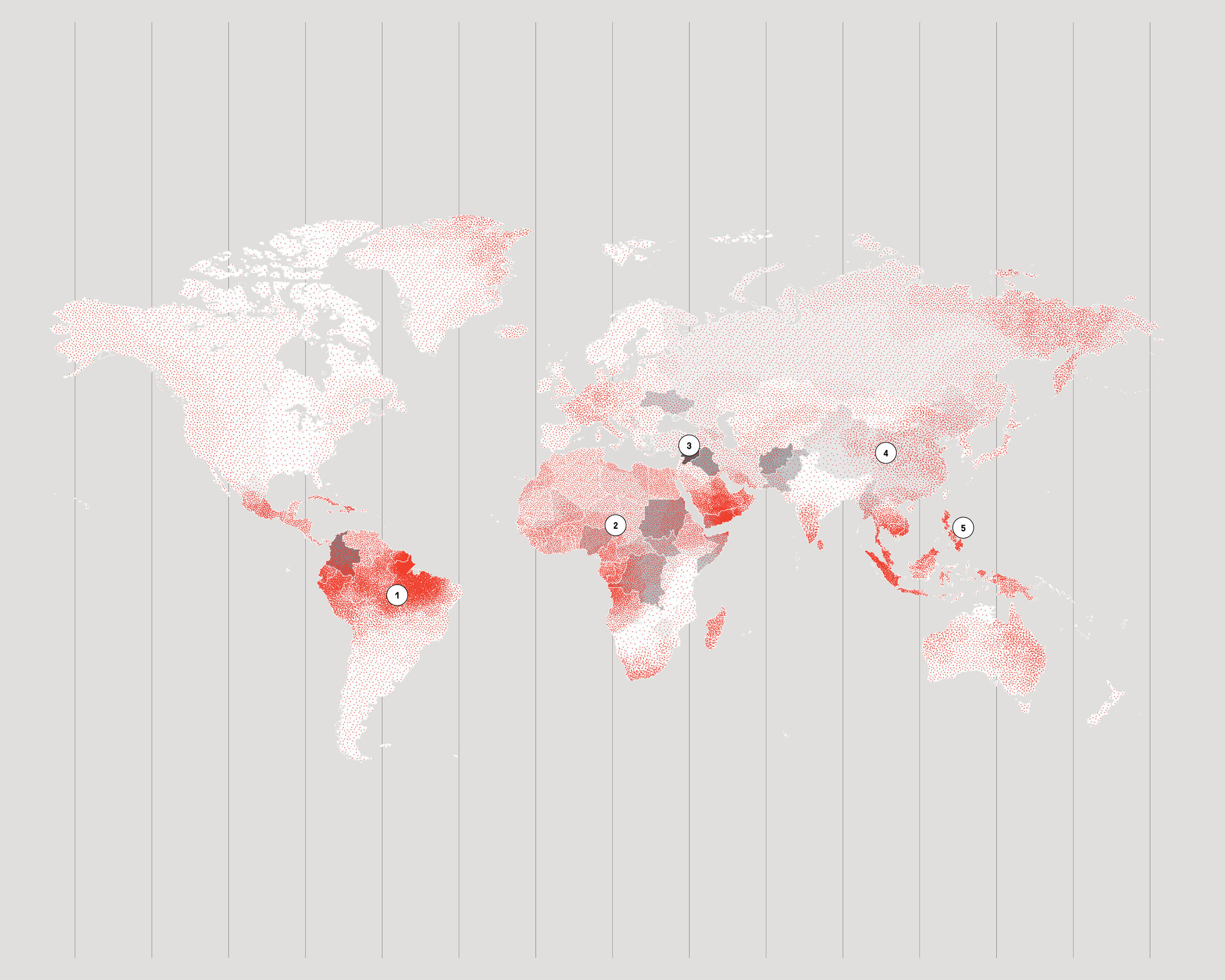 Climate displacement is becoming one of the world’s most powerful — and destabilizing — geopolitical forces.

Climate change is not equally felt across the globe, and neither are its longer term consequences. This map overlays human turmoil — represented here by United Nations data on nearly 64 million “persons of concern,” whose numbers have tripled since 2005 — with climate turmoil, represented by data from NASA’s Common Sense Climate Index. The correlation is striking. Climate change is a threat multiplier: It contributes to economic and political instability and also worsens the effects. It propels sudden-onset disasters like floods and storms and slow-onset disasters like drought and desertification; those disasters contribute to failed crops, famine and overcrowded urban centers; those crises inflame political unrest and worsen the impacts of war, which leads to even more displacement. There is no internationally recognized legal definition for “environmental migrants” or “climate refugees,” so there is no formal reckoning of how many have left their homes because climate change has made their lives or livelihoods untenable. In a 2010 Gallup World Poll, though, about 12 percent of respondents — representing a total of 500 million adults — said severe environmental problems would require them to move within the next five years.

As glacial melting reduces freshwater reserves for the Andean plain, tensions are growing between locals and the mining and agribusiness operations that consume much of what remains. Researchers predict that this resource conflict will drive more migrants to the Amazon Basin where many have already turned to informal mining and coca cultivation, fueling the rise of criminal syndicates.

A vital resource for Cameroon, Chad, Niger and Nigeria, Lake Chad has shrunk by more than 90 percent since 1963. The ecological catastrophe is a compounding factor in the Boko Haram insurgency crisis, which has led to the displacement of 3.5 million people.

In 2007, eastern Syria — along with Turkey, northern Iraq and western Iran — entered a three-year drought, the region’s worst since scientists began measuring them. In Syria, water scarcity, crop failures and livestock deaths drove an estimated 1.5 million people to the cities from rural areas. Food prices soared, contributing to economic and social tensions and leaving Syrians dangerously vulnerable to the subsequent war.

The country’s deserts have expanded by 21,000 square miles since 1975, crowding out cropland and producing devastating sandstorms. The government has resettled hundreds of thousands of “ecological migrants” — many of them religious or ethnic minorities — from across the affected areas of northern China.

Many climate models predict that warming oceans will make typhoons and tropical storms more intense, raising their destructive potential. Since 2013, nearly 15 million people have been displaced by typhoons and storms in the Philippines. The deadliest of them, Typhoon Haiyan, killed more than 7,000 people.

Jessica Benko is a journalist whose work has appeared in National Geographic and Wired and on “This American Life.”