HOW CLIMATE CHANGE BECAME A QUESTION OF FAITH... 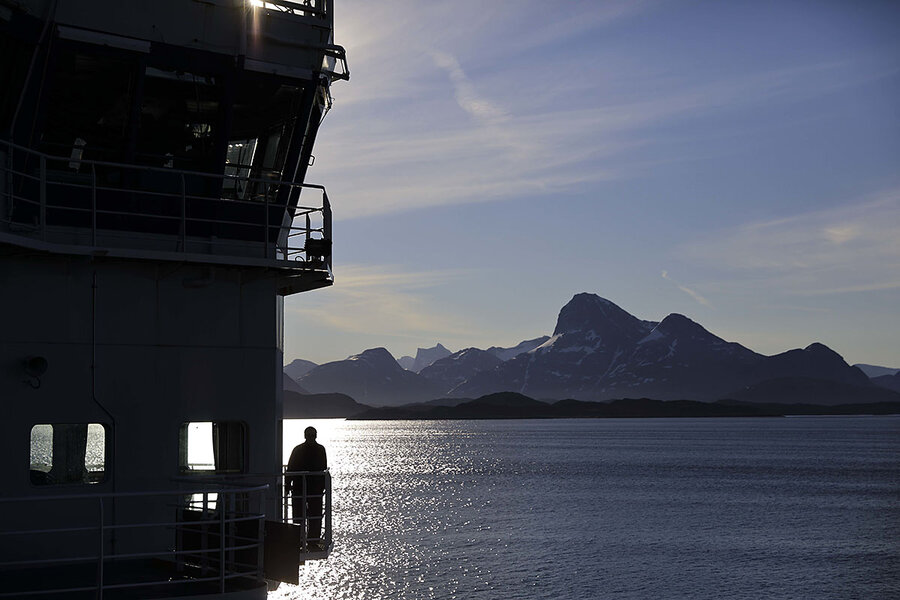 "Personnel stand aboard the Finnish icebreaker MSV Nordica as it arrives into Nuuk, Greenland, after traversing the Northwest Passage through the Canadian Arctic Archipelago, Saturday, July 29, 2017. After 24 days at sea and a journey spanning more than 6,000 miles, the MSV Nordica has set a new record for the earliest transit of the fabled Northwest Passage. The once-forbidding route through the Arctic, linking the Pacific and the Atlantic oceans, has been opening up sooner and for a longer period each summer due to climate change. David Goldman/AP

Debate around climate change frequently hinges on religion, particularly Evangelicalism. To many scientists and scholars, however, the pitting of the two against each other is a smokescreen and an oversimplification...

Every four years, the nation’s scientists from myriad federal agencies come together to release a comprehensive report synthesizing the current state of climate science. It’s become a routine affair, with a predictable process involving extensive analysis of studies, numerous drafts, and eventual approval from the White House before the public release of the latest National Climate Assessment. But this year was different.

Rather than follow traditional protocols and await approval from the Trump administration, these scientists urged The New York Times to release the document in draft form out of fear that the White House might suppress the findings. That fear likely stems from a general skepticism of climate science that runs through the Trump administration. The report, these scientists say, is too important to be sidelined by politics.

“It’s the most comprehensive and up to date report on climate science in the world at this point,” says Katharine Hayhoe, an atmospheric scientist at Texas Tech University who was one of the authors of the report. “This report covers the entire gamut of the science we need to know to make sound decisions about our future.”

Citing analysis from thousands of studies, the nation’s climate assessment offers not just a dire warning about what climate change may bring in future years, but a detailed account of effects that are already occurring and of human contributions to those changes.

“Evidence for a changing climate abounds, from the top of the atmosphere to the depths of the oceans,” a draft of the report published by The New York Times reads. “Many lines of evidence demonstrate that human activities, especially emissions of greenhouse gases, are primarily responsible for the observed climate changes in the industrial era, especially over the last six decades.”

Climate change: Is your opinion informed by science? Take our quiz!

That message conflicts with ideas put forth by many members of the Trump administration, which has taken a more skeptical view of climate science. Some of that skepticism can be traced to the evangelical community, which enjoys an unprecedented level of influence in the current White House. Though to many scientists and scholars, the pitting of climate science and religion against each other is a smokescreen, and an oversimplification.

“It is definitely the case that climate skepticism is most likely among white US Evangelicals,” says Willis Jenkins, professor of religious studies at the University of Virginia in Charlottesville. “So there is something going on in that particularly powerful demographic.”

For some scholars, the antipathy many American Evangelicals feel towards science runs deep, going back to the Scopes Trial and the ongoing rejection of the theory of evolution.

“The dispute over Darwin planted a seed, and the evolution argument set the groundwork for the current climate science argument,” says Michael Altman, professor of religious studies at the University of Alabama in Tuscaloosa.

Evangelicals had been somewhat accepting of the environmental movement in the 1960s and 1970s, when it was more a local movement focusing on pollution and litter, notes Lisa Vox, a historian who teaches at the University of Massachusetts in Boston, and author of "Existential Threats: American Apocalyptic Beliefs in the Technological Era."

But once it became an issue of global climate change, Ms. Vox notes that evangelists like the bestselling author Hal Lindsey denounced climate science as a scam “being used to to consolidate the governments of the world into a coalition that may someday facilitate the rise of the Antichrist."

Evangelical antipathy toward climate science, however, is far from uniform, and there has been a growing movement of environmental activism among the politically active subgroup. Groups such as the Evangelical Climate Initiative, which include more than 300 senior evangelical leaders in the United States, say they are convinced that “it is time for our country to help solve the problem of global warming.”

But other scholars see a decades-long effort by conservatives to discredit climate science as the primary force behind the current skepticism. “The kind of language we’re hearing now dates back to the early 1990s, and comes from the conservative think tanks who – as the Kyoto Protocols were being put together – began releasing articles and books and reports all emphasizing uncertainty about global warming,” says John Cook, professor at George Mason University’s Center for Climate Change Communication.

“Even as the science has gotten stronger and stronger, the language hasn’t changed,” he continues. “They’re still using the same arguments,” noting that now it’s “become the framing” of the issue and one that many people now accept.

There is also Republicans’ growing distrust of science. Whereas 30 or 40 years ago, surveys showed Democrats and Republicans trusting scientists around the same level, in recent decades that gap has widened, notes Professor Cook.

In a recent survey conducted mainly online by the Pew Research Center examining Americans’ feelings about climate scientists, the partisan divide was stark. Some 70 percent of liberal Democrats said they trusted climate scientists to give full and accurate information about the causes of climate change, compared with just 15 percent of conservative Republicans.

Similarly, just two years ago, 54 percent of Republicans said American colleges and universities had a positive impact on the country, with only 37 percent saying higher education had a negative impact, according to Pew Research surveys.

In a dramatic two-year shift, however, today nearly 60 percent of Republicans now see American higher education as having a negative effect on the country, according to Pew’s survey. By contrast, 72 percent of Democrats and 55 percent of the country as a whole see American colleges and universities positively.

For her part, Hayhoe says she sees those religious arguments as a smokescreen for people’s real objections: that they don’t like the perceived solutions.

“The idea that caring about this world that God created for us is somehow contrary to Christian belief is completely unbiblical,” she says. “In the US, our faith has been hijacked by our politics.”