HOW CLIMATE CHANGE IN CENTRAL ASIA IS THREATENING TO SPARK REGIONAL CONFLICT... 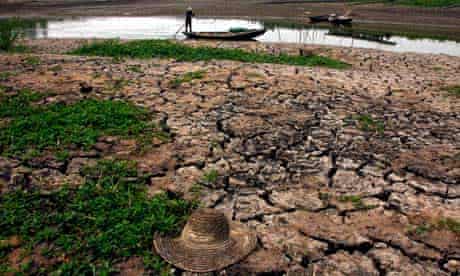 A new study finds that global warming will probably cause droughts to set in quicker and be more intense. Photograph: David Gray/REUTERS

Competition for dwindling water supplies from a mountain range in Central Asia could erupt into regional conflict, Chinese researchers have warned.

Global warming and retreating glaciers in the Tianshan range – the “water tower” of the region – have raised the spectre of water shortages that will affect “the relationship between countries in Central Asia,” the researchers warned in a report on the Chinese Academy of Sciences’ website.

Central Asia is a dry, landlocked hinterland and Tianshan is the tallest and biggest mountain range in the region. About 2,500km long and up to 350km wide, the range winds through numerous countries including Uzbekistan, Kyrgyzstan, Kazakhstan and the Xinjiang region in China.

Its seasonal snowmelt contributes most of the water for the majority of rivers in Central Asia.

But over the past decade, the range has been losing its “total water storage” at a rate of about 223 million cubic metres per year, according to the research led by Professor Chen Yaning from the academy’s Xinjiang Institute of Ecology and Geography in Urumqi.

The culprit, the researchers say, is rising temperatures.

Since 1960, annual average temperatures in the area have been rising at 0.3 degrees Celsius per decade, resulting in warm winters and less snow.

In a paper last year detailing some of their findings, Chen and colleagues warned that the situation “may pose great danger for the water tower and influence the water supply for the oasis and desert regions”.

“This may lead, within just a few decades, to some rivers running out of water in the dry season,” they said. Other than affecting the relationship of countries in Central Asia, risking regional conflict, the situation could also affect the construction of the Silk Road economic belt, jeopardising China’s plans to revive trade along the ancient Silk Road, according to the research report.

The Silk Road economic belt is part of Beijing’s “One Belt, One Road” trade initiative to increase connectivity and cooperation between China and countries on the ancient Silk Road from Central Asia to Europe.

Professor Hong Bing, from the academy’s State Key Laboratory of Environmental Geochemistry, said he agreed with the political concerns raised by the new study.

“Some rivers flow through many countries. If supply decreases, some countries might build dams and fights will break out,” said Hong, who was not involved in the research.

“The [Chinese] government is very concerned and has commissioned many research teams to investigate the issue.”

Rising temperatures, however, might also increase water vapour in the region and with it rainfall, Hong said.

“The warmer, the wetter, that’s what we found in ancient climate records in Xinjiang over the last 9,000 years. Whether the retreating glaciers and snow will result in an overall water shortage remains to be further investigated,” he said.

Chen’s team also found the area of snow cover in the middle of the mountains decreased significantly at up to 672 square kilometres per year.

Their findings were based on satellite data and ground observations.

“Decentralised” politics involving various nations and multi-ethnic populations in the region made precise estimates of Tianshan’s actual water storage difficult, the researchers said in their paper.

This article appeared in the South China Morning Post print edition as:
"Shortage of water may spark conflict..."
source: http://www.scmp.com/
original story HERE
If you would like to share this blog story on Facebook with one easy click, scroll down to the very bottom of this page and look for the SHARE button along with the Facebook LIKE button under the "Sign up to Learn About & Help End Global Warming" area where people enter their email address. You do not need to enter any email address to use the one click SHARE button.
Get more of The Global Warming Blog. Bookmark this page and signup for the blog’s free RSS Feed. Sign up for free Global Warming Blog by clicking here. You will automatically be emailed a regular summary of the latest global warming headlines.
To learn about more about global warming, climate change or greenhouse gases as well as the causes, consequences, solutions, definitions, facts and tipping points related to these subjects, click here.
To see our most current positions, opinions, comments, agreement or disagreement with this article, and/or possible criticisms related to the subjects or facts raised in the above article, click here.  Then look for those subjects in the navigation links at the top the page.
To sign a critical petition for declaring an international global warming State of Emergency, click  here!