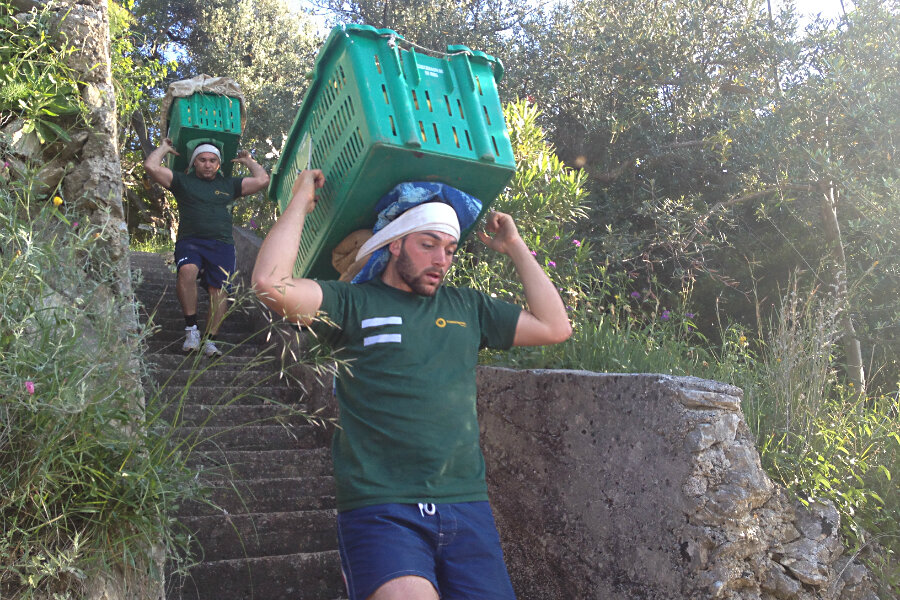 A farm laborer traverses steep steps as he carries lemons to the nearest road that a truck can reach, on Italy's Amalfi Coast. As more farmers abandon their terraced groves, stone walls are falling into disrepair and adding to landslide risks. credit: Nick Squires

January 1, 2017 Amalfi Coast, Italy—Feted by the likes of John Steinbeck and D.H. Lawrence, Italy’s Amalfi region justifiably lays claim to being one of Europe’s most beautiful coastlines.

In addition to its precipitous cliffs, sandy beaches, and pastel colored-villages, the coast is also famed for its lemons – a “sfusati” variety that are big, knobbly, and prized for their strong perfume and sweet, edible flesh.

But the steady abandonment of the hundreds of lemon terraces that help give the coastline its distinctive topography, combined with an increase in unpredictable weather, has led to a growing danger of landslides.

Climate change, blamed by experts and locals on global warming, has led to more intense rainstorms in Italy, sometimes with devastating impact on communities in this region south of Naples.

“We are experiencing rainfall that is much more intense – we are seeing torrential, almost tropical, rain,” says Michele Buonomo of Legambiente, a national environmental organization.

“It has happened in the last 10 years – the period in which we have seen the hottest temperatures globally for at least two centuries,” says Mr. Buonomo, who is the president of Legambiente in the region of Campania, which encompasses the Amalfi Coast. “Italy has done very little over the years to respond to the challenges of climate change. We need more action from the Italian government. Spending is not keeping up with the increase in more extreme weather events.” 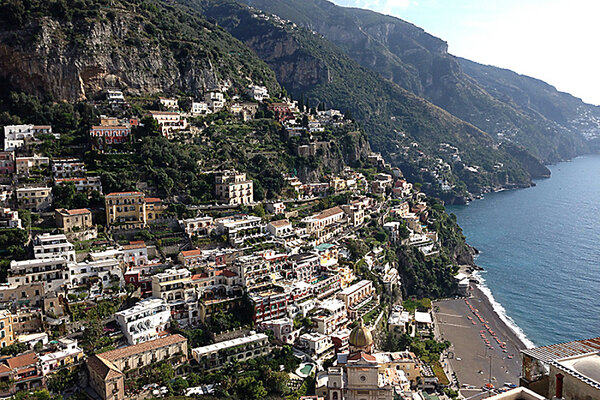 A view of Positano on Italy's Amalfi Coast. The region is famed for its scenery, but the steep terrain is also vulnerable to mudslides. credit: Alfredo Sosa

Six years ago, a torrent of muddy water and debris unleashed by heavy rains roared through the Amalfi Coast village of Atrani, killing one woman and upending cars.

The Amalfi Coast is particularly vulnerable to the effects of the unpredictable weather that is affecting the whole of Italy.

When intense storms occur, rain is funneled down the ravines that give the landscape its distinctive character, roaring down streambeds to the villages that lie on the coast.

“We are seeing the effects of global warming – in recent years the weather has been crazy,” says Salvatore Aceto, who represents the sixth generation of his family to grow lemons on the terraces that overlook the picturesque village of Amalfi, once the center of a medieval maritime trading republic.

“This year we had an explosion of flowers on the trees in early May, which is about a month too early. Last year we had snow, which is rare, and lost three-quarters of our production.

“This [past] winter we didn’t get the cold temperatures that we need to kill off parasites. We don’t know what to expect next.”

Tending the terraces and harvesting the lemons is so arduous that few young people want to take it on.

The average age of the Amalfi’s lemon cultivators is now 60, and as they retire they are not being replaced by the younger generation.

That means that the dry-stone walls that are an integral part of the centuries-old terracing system are falling into disrepair.

Once they crumble, the land is more vulnerable to floods and landslides.

A few hours spent in the company of the men who pick and carry the lemons provides ample evidence of just how hard the work is.

At harvest times, the lemons are loaded into huge plastic crates which are then hoisted onto the backs of farm laborers, who totter down steep flights of stone steps to trucks that wait at the nearest road.

Each crate weighs a staggering 125 pounds.

The extreme terrain has defied mechanization, and even mules are too large to negotiate the zig-zag paths suspended high above the shimmering blue of the Mediterranean.

The slopes are so vertiginous, almost suspended over the sea cliffs, that the lemon farmers are nicknamed in Italian “contadini volanti” – the flying farmers.

“Young people prefer to work in tourism, as waiters or cooks. It's a much easier life.”

After 30 years of harvesting lemons, he is ready for retirement next year.

The number of growers has dwindled as their lemons compete with cheaper but less aromatic ones from places like Sicily and Spain.

Carlo de Riso, who owns the principal lemon packaging business on the coast, squints into the sunshine and points at an area of former lemon terraces on a steep hillside above the village of Minori.

“Thirty people used to work up there, years ago,” he says. “But now it’s all been abandoned and that means it’s at risk of landslides.”

A group of leading geologists convened on the Amalfi Coast in April to warn of the extreme perils that the region faces as a result of the decline of lemon cultivation.

They said that successive governments had done “virtually nothing” to prevent landslides and erosion, even though such risks are higher in Italy than in any other European country because of its mountainous topography.

“You see that pink house up there on the hillside? All those terraces around it have been abandoned,” says Mr. Aceto, a grower. “That could easily cause a disaster. The dry-stone walls will collapse if they’re not maintained. Then you have a big problem. We’re losing the old men who have knowledge of building stone walls. Every year two or three walls collapse and it can cost up to 8,000 euros to rebuild one of them. Financially, it is a disaster.”

Andrea Reale is the mayor of Minori, one of the dozen or so villages that are scattered along the Amalfi Coast.

“We're experiencing much more intense, more violent storms where a large amount of rain falls all at once,” he says.

He is seeking funding from the regional government to install ground sensors and remote-controlled cameras in the hills that loom over Minori to monitor the risk of mudslides and to provide an early warning system for the 800 families who live in the village.

“If it works well here, then it could be a test case. It could be applied to the rest of the Amalfi Coast and to other areas of Italy that are at risk from erosion, like the Cinque Terre in Liguria,” he said, referring to a picturesque stretch of coastline in northwestern Italy.

“The dry-stone walls were built stone by stone by our ancestors. But the lack of maintenance presents a real risk,” the mayor says.

He is calling for greater financial incentives for farmers to keep growing lemons and maintaining their terraces.

Buonomo, from the environmental organization Legambiente, says: “Nobody wants to leave the Amalfi, so that’s not a solution. “Over the decades locals have grown used to living with the risk, but the problem is that the risks are increasing. This is already a territory of great fragility because of its geography, but it’s at even greater risk now.”

Nick Squires has been based in Rome since 2008, from which he covers Italy, the Vatican, and surrounding countries, from Greece to the Balkans. Educated at Oxford University, he spent two years working at a newspaper in Hong Kong before joining the BBC World Service in London. He then spent eight years based in Sydney, from where he covered Australia and traveled on assignments to the South Pacific, East Timor, and Papua New Guinea.

@NickSquires1
source: http://www.csmonitor.com/
January 1, 2017
original story HERE
If you would like to share this blog story on Facebook with one easy click, scroll down to the very bottom of this page and look for the SHARE button along with the Facebook LIKE button under the "Sign up to Learn About & Help End Global Warming" area where people enter their email address. You do not need to enter any email address to use the one click SHARE button.
Get more of The Global Warming Blog. Bookmark this page and signup for the blog’s free RSS Feed. Sign up for free Global Warming Blog by clicking here. You will automatically be emailed a regular summary of the latest global warming headlines.
To learn about more about global warming, climate change or greenhouse gases as well as the causes, consequences, solutions, definitions, facts and tipping points related to these subjects, click here.
To see our most current positions, opinions, comments, agreement or disagreement with this article, and/or possible criticisms related to the subjects or facts raised in the above article, click here.  Then look for those subjects in the navigation links at the top the page.
To sign a critical petition for declaring an international global warming State of Emergency, click  here!