HOW GLOBAL WARMING COULD PUSH HURRICANES TO NEW REGIONS... 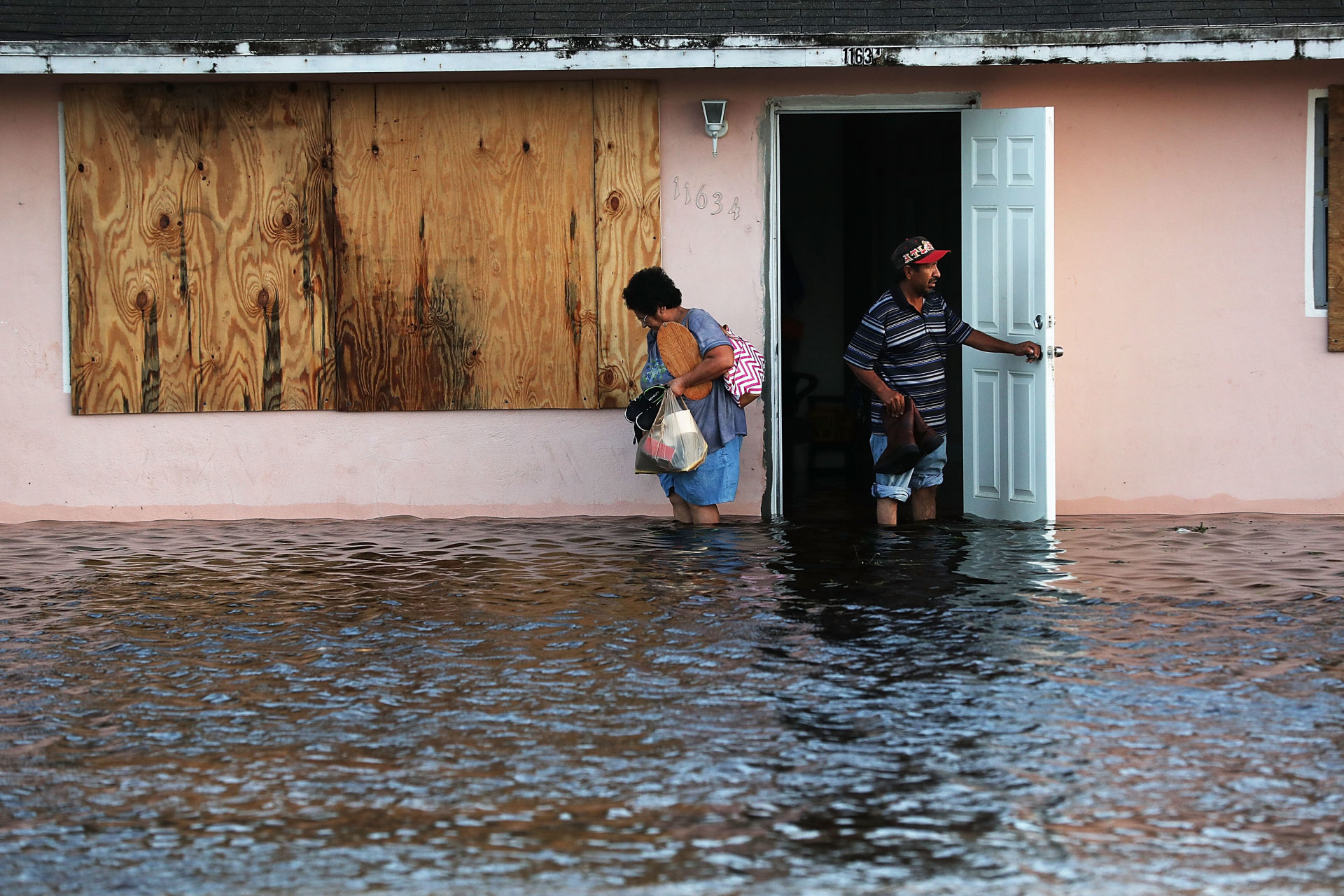 A couple leave their flooded home the morning after Hurricane Irma swept through the area on September 11th, 2017, in Fort Myers, Florida. (Photo: Spencer Platt/Getty Images)

Many scientists say there's little doubt that global warming intensified Hurricane Harvey's rainfall and may have contributed to the intensity of Hurricane Irma, which has already set numerous records for Atlantic storms. But beyond individual hurricanes, scientists are also studying how climate change could change the paths of storms.

That could bring new risks to regions like Western Europe, the American northeast, and even Southern California, according to climate scientists who study exactly how hurricane paths will change in the decades ahead.

Hurricane Harvey's stall over the Texas coast may have been an early sign of just such a shift. Climate scientists say that changes in the jetstream may have been at least partly responsible for Harvey's disastrous rains, and may also have been a factor when Superstorm Sandy turned westward over New York in 2012, rather than veering eastward like most tropical systems at that latitude.

One way to measure the impact of global warming on tropical storms is to examine what has happened since the build-up of heat-trapping greenhouse gases started in the late 1800s. In a 2016 study published in the journal Nature, researchers did just that, using mineral deposits in a Belize cave to trace Atlantic hurricane patterns over the past 450 years.

Annual rainfall leaves a chemical fingerprint in the minerals, showing how rainfall varies from year to year, somewhat like climate records derived from tree rings. And the results suggest that New York and New England may face an increasing threat as Atlantic hurricanes veer farther north instead of barreling west into the Caribbean.

As industrial emissions started increasing during the industrial boom of the late 19th century there was a big drop in hurricane activity in the western Caribbean. Over the same period, the overall number of hurricanes in the Atlantic stayed about the same, but more of them took an increasingly northerly course, steered by large-scale shifts in air-pressure patterns induced by warming.

New York and New England may face an increasing threat as Atlantic hurricanes veer farther north instead of barreling west into the Caribbean.

Other studies have also documented a robust poleward shift of tropical storm tracks in the western North Pacific and South Pacific.

"As we've seen, tropical cyclones are coming farther north than ever before because warm seas are expanding, which arguably has contributed to sending them on more northern paths," says Carl-Friedrich Schleussner, a researcher with Climate Analytics, a non-profit that uses scientific research to help small island nations cope with the effects of global warming.

The same factors could also expose parts of western Europe to unprecedented risks from tropical storms and hurricanes, as explained by another team of scientists from the Netherlands. In a 2013 study in Geophysical Research Letters, they concluded global warming will expand the tropical Atlantic hurricane formation area northeastward.

The researchers concluded that, by the year 2100, storms with tropical origins could affect parts of Europe four times as frequently as they do now. In the Bay of Biscay, the number of systems with tropical-storm-force winds could increase from two to 13 annually, and are also likely to develop earlier in the year.

There's a chance that similar changes in the Pacific Ocean could make Hawaii, and even Southern California, more frequent targets for tropical storms and hurricanes, although it's probably not near the top of the list of climate worries for the Golden State, according to oceanographer Bill Patztert, with the NASA Jet Propulsion Laboratory at the California Institute of Technology.

For now, a belt of cooler coastal water, as well as prevailing winds, tends to steer Eastern Pacific hurricanes away from land. Patztert rates the current chances of a hurricane landfall in Southern California at about 1,000 to one, but long-term climate change, as well as natural variations in ocean temperatures, could change those odds.

The likelihood of a Southern California landfall could increase during a powerful El Niño, for example, if the ocean surface near coast warms above 70 degrees Fahrenheit, which is just warm enough to sustain a tropical storm. An El Niño can also dampen the upper-level winds that usually break Pacific hurricanes apart or steer them away from the Pacific Coast. That nearly happened during the 1997 El Niño, when Hurricane Linda threatened the Southern California coast.

But Patzert says that, even if Linda had made landfall, it probably wouldn't have been with destructive winds. Instead, it would be a big rain event, similar to wintertime atmospheric rivers, with heavy rainfall and floods. That's what happened during the 1938–39 El Niño, when several tropical cyclones affected San Diego and Los Angeles, according to a NASA history of tropical storms.

The only recorded direct hurricane impact to Southern California was in 1858, when a system pushed ashore near San Diego with winds estimated at about 75 mph, according to a reconstruction by weather historians.

After studying that storm, the scientists concluded that a similar event could be expected in San Diego about every 200 years, most likely during an El Niño. But the new normal of a world heated by greenhouse gases could change those odds.