HOW HOT WAS IT IN AUSTRALIA? HOT ENOUGH TO MELT ASPHALT... 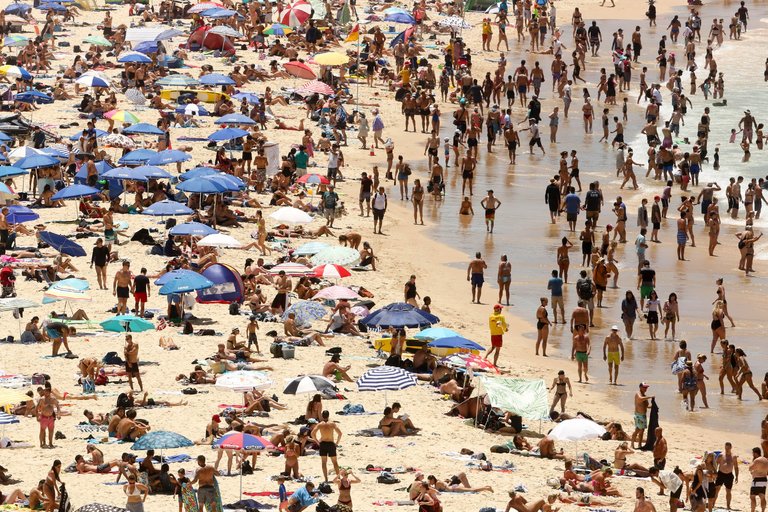 Bondi Beach in Sydney, Australia, on Sunday as the temperature reached as high as 117 degrees.CreditGlenn Campbell/European Pressphoto Agency

You probably heard about the arctic blast that turned much of North America into a Popsicle last week, but in Australia, where Christmas is a summer holiday, it was so hot this weekend that the asphalt melted on a stretch of highway...

Across large areas of Australia, temperatures hit life-threatening levels. Penrith, a suburb of Sydney, reached 47.3 degrees Celsius on Sunday, or just over 117 degrees Fahrenheit. It was the hottest day on record in Penrith, according to the Bureau of Meteorology, New South Wales, and the hottest anywhere in the Sydney area since 1939, when a temperature of 47.8 degrees — 118 degrees Fahrenheit — set a record that still stands.

At 40.1 degrees Celsius or 104 degrees Fahrenheit, Melbourne, 550 miles southwest, was comfortable only by comparison.

Beaches in Sydney were so crowded, there was barely room to maneuver. Bushfires raged out of control near Melbourne, and on the Hume Highway, which links Sydney and Melbourne, a stretch of asphalt oozed apart in the heat, causing a major traffic jam.

The scorching heat was short-lived. By Monday, the temperature in Sydney had dropped to 84 degrees Fahrenheit, and Melbourne was in the high 60s.

Summer temperatures in the coastal cities of eastern Australia are generally much lower than those in the country’s central deserts. In January, the average highs in Sydney and Melbourne are around 79 degrees, according to the Bureau of Meteorology.

Some triple-digit days are far from unheard-of, but climate change has ushered in more intense heat waves. A 2016 “State of the Climate” report by the bureau found that average surface air and sea temperatures had risen by around 1 degree Celsius (about 1.8 degrees Fahrenheit) since 1910, and that “the duration, frequency and intensity of extreme heat events” had increased.

A 2015 study found that from 2000 to 2014, Australia set 12 heat records for every one cold record. By contrast, from 1910 to 1960 — the first 50 years of reliable temperature records in the country — extreme heat and extreme cold were about equally common.

And a study published last year warned that by 2040, heat waves in cities like Sydney and Melbourne could bring temperatures of 50 degrees Celsius: a dangerous and, yes, asphalt-melting 122 degrees Fahrenheit.