HOW WE KNOW IT WAS CLIMATE CHANGE... 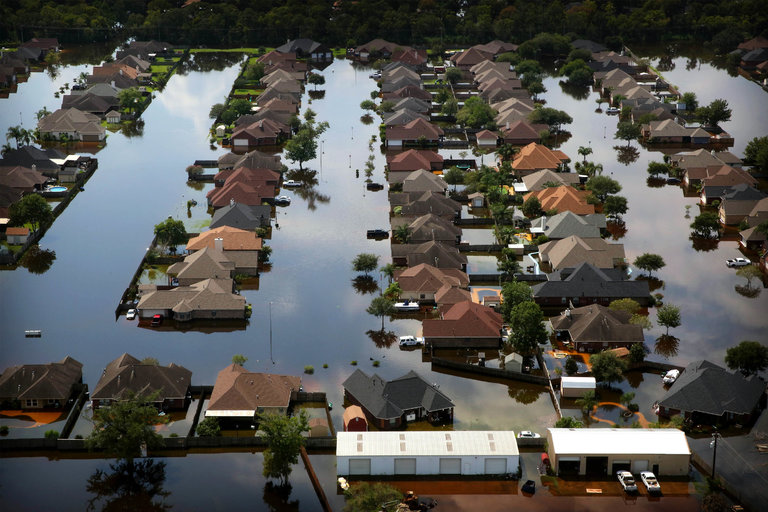 Flooding south of Houston in September in the wake of Hurricane Harvey. Credit: Barbara Davidson for The New York Times

STANFORD, Calif. — This was a year of devastating weather, including historic hurricanes and wildfires here in the United States. Did climate change play a role? Increasingly, scientists are able to answer that question — and increasingly, the answer is yes...

My lab recently published a new framework for examining connections between global warming and extreme events. Other scientists are doing similar research. How would we go about testing whether global warming has influenced the events that occurred this year?

Consider Hurricane Harvey, which caused enormous destruction along the Gulf Coast; it will cost an estimated $180 billion to recover from the hurricane’s storm surge, high winds and record-setting precipitation and flooding. Did global warming contribute to this disaster?

The word “contribute” is key. This doesn’t mean that without global warming, there wouldn’t have been a hurricane. Rather, the question is whether changes in the climate raised the odds of producing extreme conditions.

Hurricanes are complicated business. While there is evidence that global warming should increase the frequency of very intense storms, their rarity and complexity make it difficult to detect climate change’s fingerprint.

It is therefore critical to examine all of the contributing factors. In the case of Hurricane Harvey, these include the warm ocean that provided energy for the storm; the elevated sea level on top of which the storm surge occurred; the atmospheric pressure pattern that contributed to the storm’s stalling over the coast; and the atmospheric water vapor that provided moisture for the record-setting precipitation.

In examining these factors, scientists are deeply skeptical: We start with the assumption that each condition arose by chance, and then require a very heavy burden of proof to reject that assumption (analogous to the “beyond a reasonable doubt” standard in criminal cases).

The first step is to ask whether historical changes have been observed in any of the factors. For example, ocean temperatures have increased in recent decades. Applying the same statistical techniques used in engineering, medicine and finance, we can analyze whether those increases have changed the odds of achieving this year’s warm temperatures in the tropical Atlantic and Gulf of Mexico.

But identifying a trend doesn’t tell us the cause. For that, we run controlled experiments using computerized climate models that simulate conditions in previous decades, with and without the variable of human-generated greenhouse gases in the atmosphere. By comparing those experiments with historical weather data, we can quantify how likely an event is with and without human-generated warming. Based on previous warm years, we can expect to find that human-generated warming influenced this year’s ocean temperatures.

We also know that global warming is increasing the moisture in the atmosphere, meaning that a given storm can produce more precipitation. Analyses by Kerry Emanuel of M.I.T. and others since the storm show that global warming makes heavy rainfall during storms like Hurricane Harvey more likely.

Further, Hurricane Harvey’s stalling over the coast was critical for the record rainfall. The exact meteorological causes are complex, but the pattern of atmospheric pressure across North America played an important role. We have found that global warming increased the odds of the pressure pattern that contributed to the 2010 Russian heat wave that killed more than 50,000 people. We can likewise look back at pressure patterns during past hurricane seasons and examine whether global warming has altered the odds of patterns similar to Hurricane Harvey’s.

In addition to the heavy rainfall, storm surge contributed to coastal flooding. When hurricanes make landfall, low pressure and strong winds push water onto land. By increasing the mean sea level, global warming has “raised the floor” from which storm surge occurs. As a result, a storm is more likely to cause extensive flooding. Sea-level rise tripled the odds of Hurricane Sandy’s flood level in 2012. A similar analysis can be applied to the Hurricane Harvey storm surge.

So, what role did climate change play in Hurricane Harvey? There is already evidence that global warming influenced its precipitation. My collaborators and I are applying our framework to test the other factors. We don’t have a full answer yet but we expect one in the coming months.

Our scientific framework can also be applied to other events. Like Harvey’s devastation, California’s ravaging wildfires arose from a confluence of factors. Strong, dry winds were the most immediate contributor. In addition, the protracted drought that killed millions of trees created substantial fuel. After the drought, an extremely wet winter was followed by severely hot, dry conditions in the summer and fall, which together produced near-record fuel for fires. Although each of these specific factors will need to be analyzed, we already know that global warming has increased fuel aridity in the West, meaning that fires are more likely to encounter large amounts of dry fuel.

There is now ample evidence that global warming has influenced extremes in the United States and around the world through such factors as temperature, atmospheric moisture and sea level. This doesn’t mean that every event has a human fingerprint. But it does mean that we can expect more years like this one, when our old expectations no longer apply.