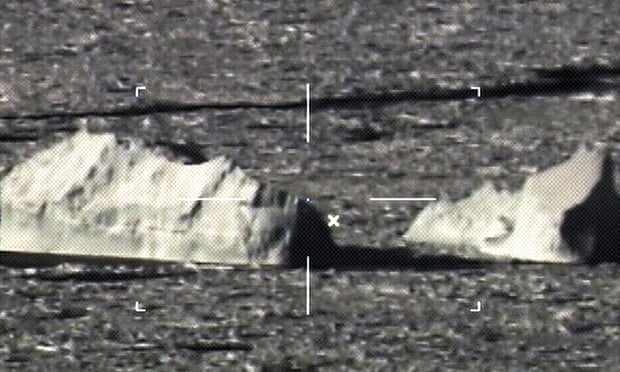 This photo from a US Coast Guard reconnaissance aircraft shows icebergs floating near the Grand Banks of Newfoundland in the North Atlantic. Photograph: AP

About 450 icebergs – up from 37 a week earlier – have drifted into waters where Titanic sank, forcing vessels to divert and raising global warming fears...

More than 400 icebergs have drifted into the North Atlantic shipping lanes over the past week in an unusually large swarm for this early in the season, forcing vessels to slow to a crawl or take detours of hundreds of kilometres. 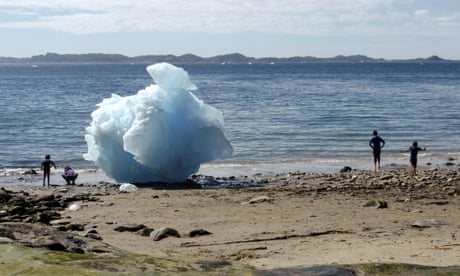 Greenland: the country set to cash in on climate change...

Experts are attributing it to uncommonly strong counter-clockwise winds that are drawing the icebergs south, and perhaps also global warming, which is accelerating the process by which chunks of the Greenland ice sheet break off and float away.

As of Monday, there were about 450 icebergs near the Grand Banks of Newfoundland, up from 37 a week earlier, according to the US Coast Guard’s international ice patrol in New London, Connecticut. Those kinds of numbers are usually not seen until late May or early June. The average for this time of year is about 80.

In the waters close to where the Titanic went down in 1912, the icebergs are forcing ships to take precautions.

Instead of cutting straight across the ocean, trans-Atlantic vessels are taking detours that can add around 650km (400 miles) to the trip. That’s a day and a half of added travel time for many large cargo ships.

Close to the Newfoundland coast, cargo ships owned by Oceanex are throttling way back to three or four knots as they make their way to their home port in St John’s, which can add up to a day to the trip, said executive chairman Captain Sid Hynes.

One ship was pulled out of service for repairs after hitting a chunk of ice, he said.

“It makes everything more expensive,” Hynes said. “You’re burning more fuel, it’s taking a longer time, and it’s hard on the equipment.” He called it a “very unusual year”.

US Coast Guard Commander Gabrielle McGrath, who leads the ice patrol, said she had never seen such a drastic increase in such a short time. Adding to the danger, three icebergs were discovered outside the boundaries of the area the Coast Guard had advised mariners to avoid, she said.

McGrath is predicting a fourth consecutive “extreme ice season” with more than 600 icebergs in the shipping lanes.

Most icebergs entering the North Atlantic have “calved” off the Greenland ice sheet. Michael Mann, director of the earth system science center at Pennsylvania State University, said it was possible climate change was leading to more icebergs in the shipping lanes, but wind patterns were also important.

Giant iceberg poised to break off from Antarctic shelf...

The international ice patrol was formed after the sinking of the Titanic to monitor iceberg danger in the North Atlantic and warn ships. It conducts reconnaissance flights that are used to produce charts.

In 104 years, no ship that has heeded the warnings has struck an iceberg, according to the ice patrol.