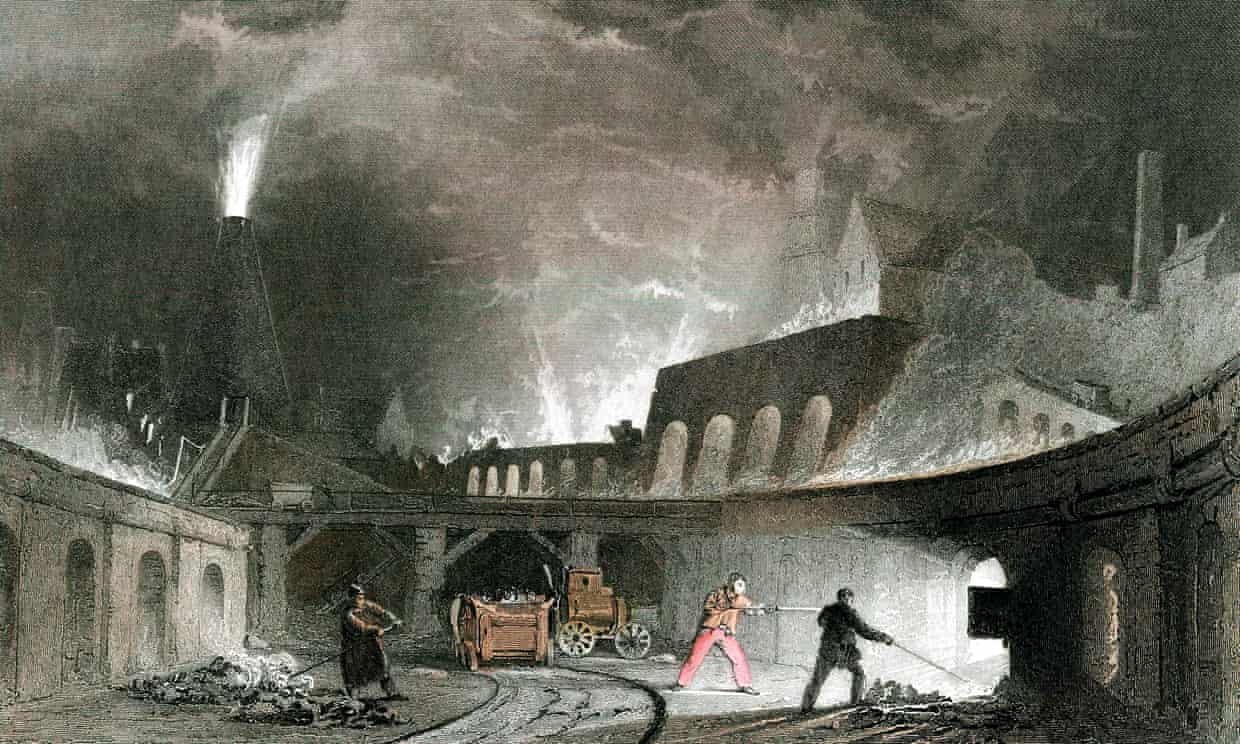 The first signs of warming from the rise in greenhouse gases which came hand-in-hand with the Industrial Revolution appear as early as 1830. Photograph: Print Collector/Getty Images

Signs of warming appear as early as 1830 say researchers, whose analysis will help build accurate baseline of temperature before influence of human activity...

Continents and oceans in the northern hemisphere began to warm with industrial-era fossil fuel emissions nearly 200 years ago, pushing back the origins of human-induced climate change to the mid-19th century.

The first signs of warming from the rise in greenhouse gases which came hand-in-hand with the Industrial Revolution appear as early as 1830 in the tropical oceans and the Arctic, meaning that climate change witnessed today began about 180 years ago.

Researchers in Australia found evidence for the early onset of warming after trawling through 500 years of data on tree rings, corals and ice cores that together form a natural archive of Earth’s historical temperatures.

Much of what is known about Earth’s climate history is based on instruments that have monitored temperatures from the 1880s onwards. But while these capture the changing conditions seen in the 20th century, they miss the start of the warming trend.

“A lot is known about the climate record for the time when we have instrumental records,” said Nerilie Abram, a climate scientist at the Australian National University. “We wanted to look at whether these records give us the full picture.”

Pooling the data, the scientists found that temperatures in the tropical oceans and in the air above northern hemisphere land-masses began to rise above natural variations in the 1830s, just as greenhouse gas emissions edged upwards.

The scientists first thought that they were seeing the climate rebound after a period of natural cooling brought on by particles thrown high into the atmosphere from volcanic eruptions. But climate simulations showed that the warming they observed could be explained purely by the small rise in greenhouse gas emissions.

“The changes in greenhouse gases in the 19th century were small compared with the fairly rapid changes we see now, so seeing the climate respond this way was a surprise,” said Abrams.

The southern hemisphere, including Australasia and South America, appeared to start heating up 50 years later, near the turn of the century, while no sign of warming on the continental scale was noticed in Antarctica. The lack of appreciable warming in Antarctica may be down to ocean currents carrying warm waters to the north and away from the frigid continent.

The results are important to build up an accurate baseline of the Earth’s temperature before human activity began to wield an influence on the climate. Details of the study, which involved 25 scientists across Australia, the US, Europe and Asia, are published in the journal Nature.

Industrialisation led to only minor rises in greenhouse gases in the 1800s, but what struck the scientists was how swiftly the climate changed as a result. “There is a potential that this could have a flip side,” Abram said. “If we can do anything to slow down greenhouse gas emissions, or even start to draw them back, there may be at least some areas of the climate system where we get a rapid payback.”