HUMANS ON THE VERGE OF CAUSING EARTH’S FASTEST CLIMATE CHANGE IN 50M YEARS... 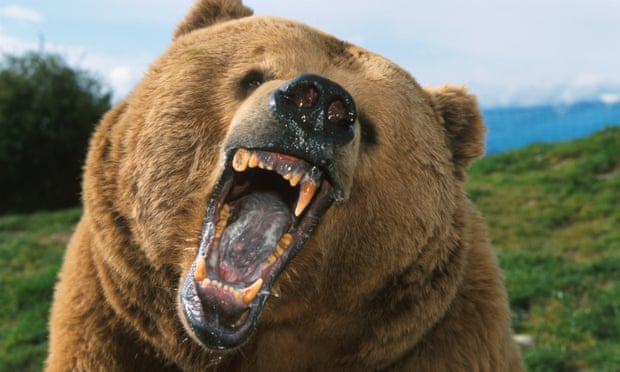 As climate scientist Wallace Broecker once said, “The climate system is an angry beast, and we are poking at it with sticks.” Photograph: Alamy

Humans are changing Earth’s climate at an alarmingly fast rate...

A new study published in Nature Communications looks at changes in solar activity and carbon dioxide levels over the past 420 million years. The authors found that on our current path, by mid-century humans will be causing the fastest climate change in approximately 50 million years, and if we burn all available fossil fuels, we’ll cause the fastest change in the entire 420 million year record. 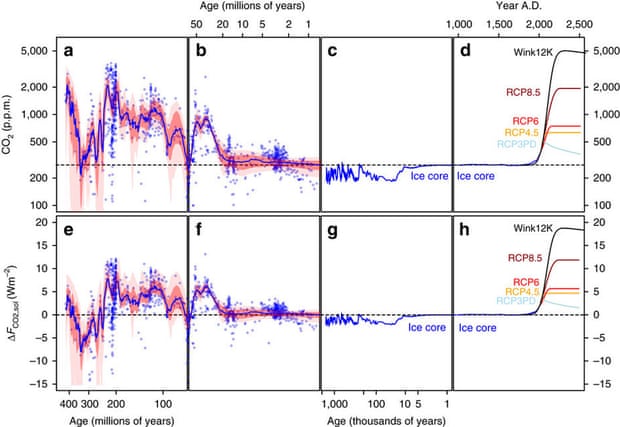 Changes in atmospheric carbon dioxide and in the combined solar and carbon dioxide forcing over the past 420 million years. Illustration: Foster et al. (2017); Nature Communications.

The study relates to a scientific conundrum known as the “faint young sun paradox” – that early in Earth’s history, solar output was 30% less intense than it is today, and yet the planet was warm enough to have a liquid ocean. A stronger greenhouse effect due to higher carbon dioxide levels in the atmosphere may be one explanation.

Over time, solar output has grown stronger, and atmospheric carbon dioxide levels have fallen due to an effect known as “weathering” of rocks and an increase in plant life. The authors of this study found that over the past 420 million years, the slow heating of the sun and slow decline of the greenhouse effect have roughly offset each other, leading to a fairly stable long-term global climate. 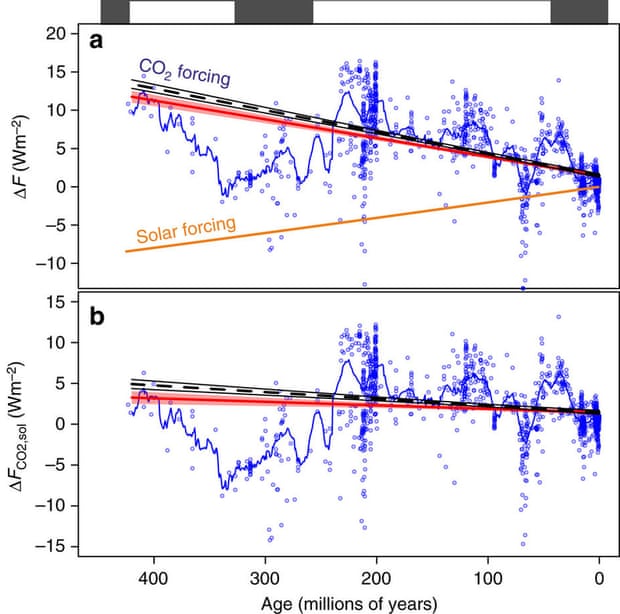 Changes in the solar and carbon dioxide forcings over the past 420 million years. Illustration: Foster et al. (2017); Nature Communications.

In particular, as shown in the first chart above, Earth’s climate has been fairly stable over the past several million years. The wiggles in the blue line represent transitions in and out of ice ages, due to wobbles in the Earth’s orbit around the sun, amplified by changes in the amount of carbon dioxide in the atmosphere (these are known as Milankovich cycles).

The bottom frame in the chart shows the change in forcing (global energy imbalance) caused by the combination of changes in solar activity and the greenhouse effect. When the line is flat, the Earth’s energy balance is stable, and thus so is its climate. When there’s a steep change, something is upsetting that balance and causing a rapid climate change. The five colored lines toward the end of the chart show potential pathways we’ll follow, depending on how much fossil fuels humans burn over the coming decades.

In every case the line is already quite steep due to the hundreds of billions of tons of carbon pollution humans have dumped into the atmosphere thus far. The size of the global energy imbalance we’ve caused is already on par with those previous blue wiggles – Earth’s ice age transitions. If we keep burning lots of fossil fuels, we could soon cause higher carbon dioxide levels and faster climate change than the Earth has seen in 50 million years. If we burn all available fossil fuel reserves (the black “Wink12k” line), we’ll see faster climate change than in the entire 420 million year record.

It’s an alarming proposition. Climate deniers will often argue against taking action to curb carbon pollution because climate changed naturally in the past and carbon dioxide levels were higher in the past. One Republican congressman repeated these talking points in the latest House “Science” committee hearing. While both arguments are technically true, they miss several important points.

As renowned climate scientist Wallace Broecker once said, “The climate system is an angry beast, and we are poking at it with sticks.”

As this new study shows, our poking sticks are getting bigger and bigger, and we’re poking the beast faster and faster. Meanwhile, climate deniers are egging us on because the beast has been angered in the past, and we’re not sure just how soon it will decide to maul us.