HURRICANE HARVEY WAS NO SURPRISE... 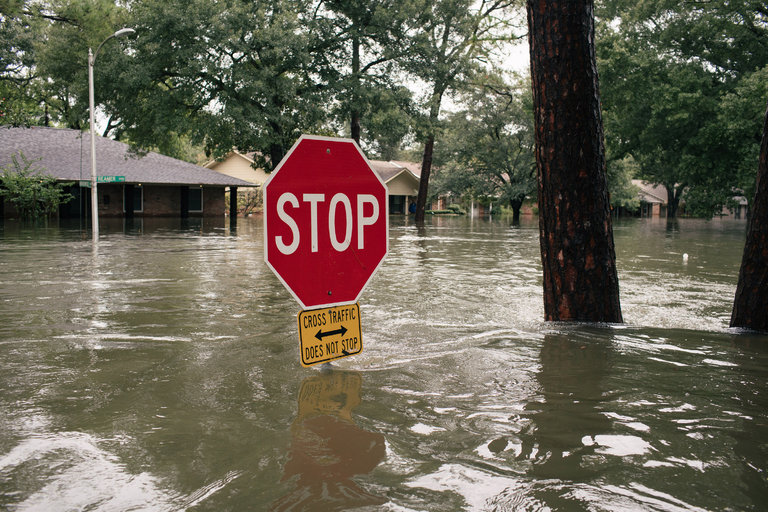 The Meyerland area of Houston on Sunday in the wake of Hurricane Harvey. Credit Alyssa Schukar for The New York Times

Stanford, Calif. — On Sunday, amid the unfolding disaster in Texas, President Trump tweeted his amazement that Hurricane Harvey was producing unprecedented rainfall and flooding. He shouldn’t have been surprised...

Climate science has repeatedly shown that global warming is increasing the odds of extreme precipitation and storm surge flooding. Refusing to acknowledge this impairs our ability to prepare for future extreme weather and endangers American lives and property.

The storm has already caused tremendous damage in Houston and the surrounding region, including at least five deaths. And because it is likely to remain stalled along the Gulf Coast, more destruction seems a certainty.

Although seas have risen and warmed, and the atmosphere now holds more moisture, we can’t yet draw definitive conclusions about the influence of climate change on Hurricane Harvey. Hurricanes are complex events, and the role of historical warming in their development continues to be studied. But it is well established that global warming is already influencing many kinds of extremes, both in the United States and around the world, and it is critical to acknowledge this reality as we prepare for the future.

In particular, recent research shows that weather that falls outside of our historical experience is becoming more likely. For example, my colleagues and I recently found that global warming has already increased the odds of record-setting heat waves across more than 80 percent of the planet where we have reliable observations, and influenced record-setting wet and dry events across half that area.

Other studies show a similar influence from global warming, including the extreme rainfall that caused floods on the central Gulf Coast last year. There is now so much evidence of increasing extremes that anyone who understands the science — or trusts the scientists in their government doing the research — should expect that records will continue to be broken.

Incorporating this scientific understanding into federal, state and local decision-making can help prepare for extreme events. For decades, the default approach has been to assume a “stationary” climate — one in which the odds of extremes have remained unchanged. But because global warming is increasing those odds, being resilient and prepared means incorporating the changing probabilities into planning, design and operation decisions.

Unfortunately, President Trump is moving America in the opposite direction. In fact, his administration recently announced a rollback of infrastructure regulations including an Obama-era requirement to consider climate change and sea-level rise when building roads, bridges and pipelines with federal money.

Refusing to account for climate change is an expensive proposition. We won’t know the full costs of Hurricane Harvey for some time. But extreme weather causes billions of dollars of damage in the United States each year. The number of these events and their costs have been increasing, with the toll over the last decade exceeding $250 billion. And that number doesn’t include the full humanitarian and ecological destruction left in their wake.

The value and vulnerability of the infrastructure in harm’s way clearly contribute to the upward trend in disaster losses. However, it is also clear that the odds of events like extreme rainfall, storm surge flooding and severe heat have also been increasing because of global warming, increasing the odds of catastrophic damage. Ignoring this reality is costly.

As Roger-Mark De Souza of the Wilson Center and my Stanford colleagues Chris Field, Katharine Mach and Alice Hill pointed out last week, coastal communities are already incorporating climate information into their planning and are realizing financial savings. They are incorporating social media into early-warning and response systems, improving the coordination of evacuation decisions, placing more emphasis on vulnerabilities caused by social and economic inequality and elevating structures within floodplains. Other actions that would require state or federal coordination include revising the National Flood Insurance Program to catch up with the changing risk profile, and relocating communities that face acute threats.

Being smart about managing exposure and vulnerability is critical to reducing risks. But doing so requires acknowledging that global warming is happening, that humans are the primary cause and that the odds of catastrophes like Hurricane Harvey are increasing.

Instead, President Trump, who is moving to unravel President Obama’s climate change agenda, recently disbanded a federal advisory panel on climate change and proposed a budget that slashes both climate research and support for the agencies that Americans rely on for understanding, forecasting and preparing for climate and weather disasters.

Refusing to acknowledge the changing odds of extremes means that we will be unprepared for events that fall outside of our experience. Denying climate science is not just a political statement. It also puts American lives and property at risk.

Noah S. Diffenbaugh is a professor of earth system science at Stanford.