HURRICANE IRMA LINKED TO CLIMATE CHANGE? FOR SOME, A VERY ‘INSENSITIVE’ QUESTION... 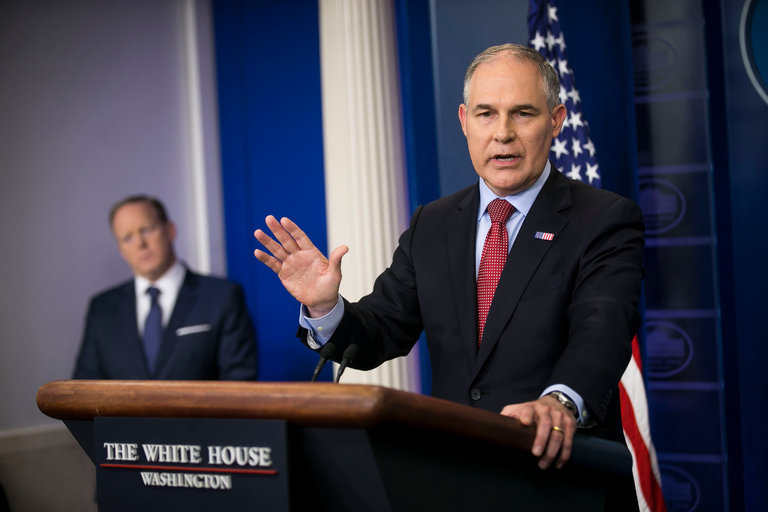 Scott Pruitt, administrator of the Environmental Protection Agency, at the White House in June. Credit Al Drago for The New York Times

WASHINGTON — Scott Pruitt, the administrator of the Environmental Protection Agency, says it is insensitive to discuss climate change in the midst of deadly storms...

Tomás Regalado, the Republican mayor of Miami whose citizens raced to evacuate before Hurricane Irma, says if not now, when?

For scientists, drawing links between warming global temperatures and the ferocity of hurricanes is about as controversial as talking about geology after an earthquake. But in Washington, where science is increasingly political, the fact that oceans and atmosphere are warming and that the heat is propelling storms into superstorms has become as sensitive as talking about gun control in the wake of a mass shooting.

“To have any kind of focus on the cause and effect of the storm versus helping people, or actually facing the effect of the storm, is misplaced,” Mr. Pruitt said to CNN in an interview ahead of Hurricane Irma, echoing similar sentiments he made when Hurricane Harvey made landfall in Texas two weeks earlier. “To use time and effort to address it at this point is very, very insensitive to this people in Florida,” he added.

A ‘500-Year Flood’ Could Happen Again Sooner Than You Think. Here’s Why. 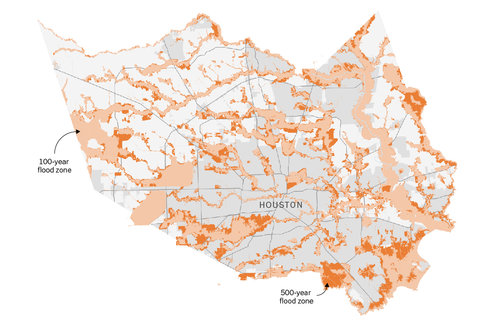 Ben Kirtman, a professor of atmospheric science at the University of Miami’s Rosenstiel School of Marine and Atmospheric Science, said he believes failing to discuss climate change hurts Florida and the entire country.

“It’s precisely the conversation that we should be having right now. I’m not sure what’s insensitive about that,” said Dr. Kirtman, who evacuated from Florida on Wednesday. “It’s really important to direct resources and funds to the crisis on the ground at the moment, of course. But I don’t see why what’s causing these storms and what’s contributing to making it worse is necessarily mutually exclusive.”

To be sure, people nailing plywood to their windows or stuffing emergency provisions into a suitcase are not in a position to dwell on the causes behind the storms. But Leonard Berry, the former director of the Center for Environmental Studies at Florida Atlantic University who is riding out Hurricane Irma in his home in Boca Raton, Fla., said policy makers have an obligation to talk about it if they hope to protect citizens from increasingly powerful storms going forward.

“Immediately afterward we’ve got to say ‘Come on guys, let’s really see if this is a harbinger of the future.’ And it clearly is to those of us who have looked even generally at the issue,” he said. “One should be sensitive, but not stupid.”

Dr. Kirtman and Dr. Berry are among a group of Florida scientists who confronted Governor Rick Scott in recent years for his refusal to acknowledge that human-made greenhouse gases are driving climate change. Last year they wrote a letter to then-candidate Donald J. Trump asking for a meeting to discuss the consequences of climate change in Florida. They said the Trump campaign never responded.

President Trump has derided climate change as a hoax. Mr. Pruitt has declared that carbon dioxide emissions from cars, power plants and other sources are not the primary contributor to global warming, despite overwhelming scientific evidence to the contrary. The E.P.A. has removed many mentions of climate change from its website and is rolling back regulations aimed at curbing carbon dioxide emissions.

The Cost of Hurricane Harvey: Only One Recent Storm Comes Close

In Florida, scientists say, Gov. Scott’s aversion to even the words “climate change” have prompted scientists to self-censor their work.

“If you write a proposal and it talks about fixing some infrastructure because of climate change, it’s not going anywhere,” Mr. Kirtman said. “You spend an awful lot of effort word-searching your document for the words ‘climate’ and ‘change.’ It’s silliness.”

That is one reason many scientists maintain it is critical to use the megaphone that the dual devastation of Hurricane Harvey and Hurricane Irma has provided. People, they note, are finally paying attention.

“We know that as humans, we are all too good at pretending like a risk, even one we know is real, doesn’t matter to us,” Katharine Hayhoe, an atmospheric scientist at Texas Tech University, wrote in an email as Harvey lashed the Texas coast.

“When we try to warn people about the risks, there’s no ‘news’ hook. No one wants to listen. That’s why the time to talk about it is now,” Dr. Hayhoe said. “The most pernicious and dangerous myth we’ve bought into when it comes to climate change is not the myth that it isn’t real or humans aren’t responsible. It’s the myth that it doesn’t matter to me. And that is exactly the myth that Harvey shatters.”

It’s unclear whether experiencing powerful storms will change minds. A 2015 study published in the journal Climatic Change found Americans experiencing extreme weather events are not necessarily more concerned about climate change. Last week E&E News interviewed several Republican lawmakers whose constituents were hit by Hurricane Harvey and most said they had not considered the issue of climate change.

Dr. Hayhoe said that scientists have to keep communicating the risks. “We need to understand what’s at stake, because if not, we won’t act,” she said.