HURRICANE NATE MAKES LANDFALL ON THE GULF COAST, THEN WEAKENS... 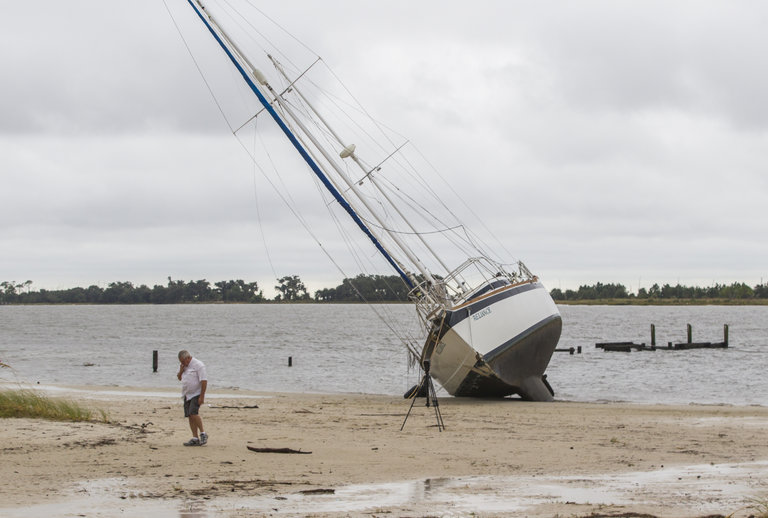 A sailboat washed ashore on a beach in Biloxi, Miss., after Hurricane Nate made landfall near the mouth of the Mississippi River with winds of 85 miles per hour. Credit Mark Wallheiser/Getty Images

Hurricane Nate, the fourth to lash the United States in just over six weeks, made landfall on Saturday in southeast Louisiana, near the mouth of the Mississippi River, as a Category 1 system. It made landfall again hours later, this time near Biloxi, with roaring wind and heavy rain, and dragged in flooding that overtopped Highway 90 and poured into the bottom level of some parking garages.

The storm weakened rapidly after the second landfall. The National Hurricane Center downgraded the hurricane to a tropical storm and then a tropical depression as it rapidly moved farther inland over Mississippi and Alabama. Nate’s maximum sustained winds had slowed to 35 miles an hour by 11 a.m. Eastern time, though gusts up to tropical-storm strength were still possible. Heavy rains continued to pose a threat of flooding across the Southeast, but other than pounding surf, the storm’s threat to coastal areas had largely passed. 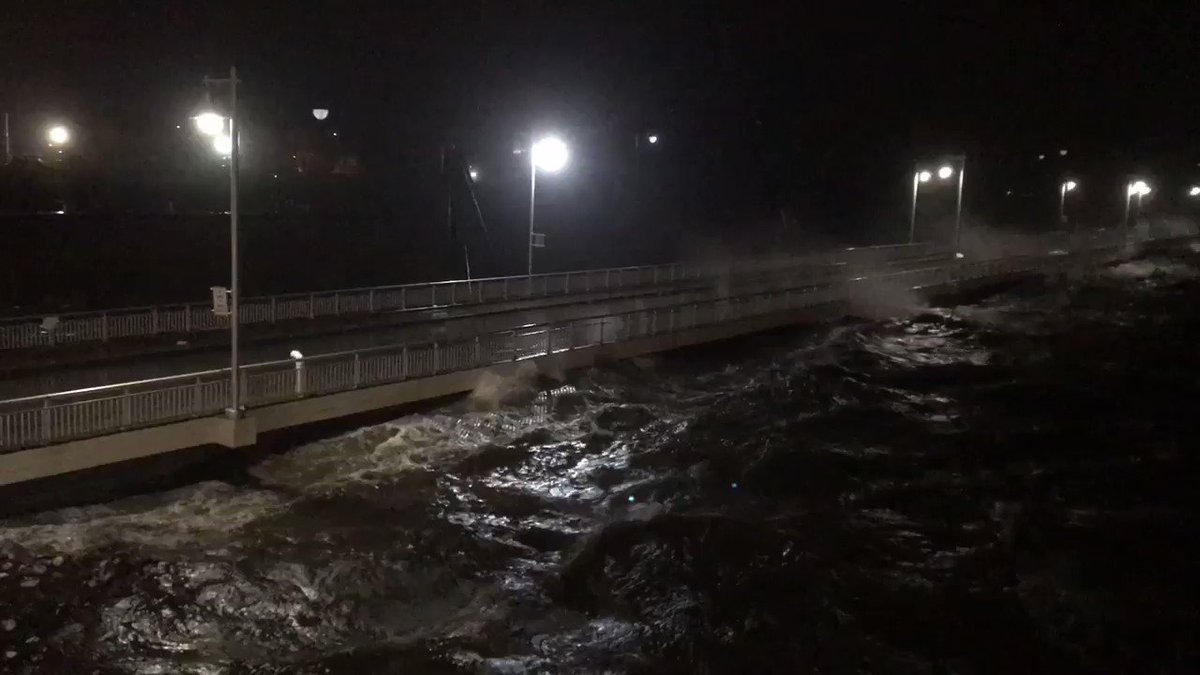 Storm surge flooding in Biloxi: Water is crashing onto the fishing bridge by the Palace Casino Resort

The governors of Alabama, Florida, Louisiana and Mississippi declared states of emergency ahead of the storm, and counties along the coast issued curfews and ordered evacuations in low-lying areas. Late Saturday night, President Trump declared an emergency in Mississippi, as he already had in Louisiana.

The state authorizes officials from the Federal Emergency Management Agency, which is already responding to the season’s other hurricanes, to coordinate disaster relief efforts in the affected counties there.

The storm’s swift approach startled this stretch of the Gulf Coast, where many had hoped they might be able to slip through the grips of this wrenching hurricane season.

“I didn’t expect any more — I felt like we were close enough to the end of the season,” Donna Moran, 57, said as she stood in the parking garage of the Palace Casino Resort here, watching the choppy waves of the Biloxi Bay spray the parking lots at the water’s edge. 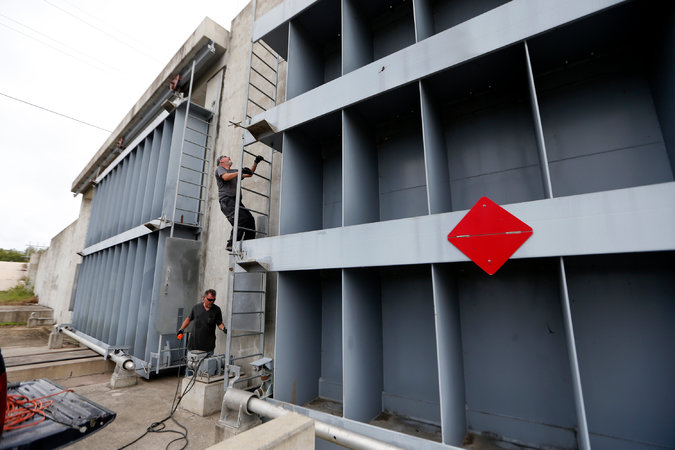 Workers close a floodgate in Violet, La., in preparation for Hurricane Nate, which made landfall as a Category 1 storm. Credit Gerald Herbert/Associated Press

Even though the hurricane was expected to weaken into a tropical storm as it moved inland on Sunday, it still had an emotional toll here in Mississippi. When Hurricane Katrina made landfall in 2005, when 6,000 of Biloxi’s 25,000 structures were destroyed.

“I was a little bit more nervous about this one because we haven’t had a hurricane since Katrina,” said Ms. Moran’s daughter Destiny, 26, an employee of the casino. “It’s like PTSD.”

In New Orleans, where Katrina exacted a horrendous toll when its waters overwhelmed the flawed levee system and left the city underwater for weeks, officials began to sound a note of cautious optimism by early Saturday evening, even as they acknowledged that circumstances could change. Officials lifted the city’s short-lived curfew around 9:30 p.m.

“This is the Goldilocks of storms,” Col. Michael Clancy, the commander of the New Orleans District for the Army Corps of Engineers, said. “Big enough to bring us in here on a Saturday night, not big enough to cause a lot of damage.”

The strength of the city’s improved hurricane defense system, he predicted, “is going to make this a minimal event, at least behind the levee.”

After amassing power in the gulf, Hurricane Nate raced toward land and was lashing coastal cities with rain by late afternoon.

Gov. John Bel Edwards of Louisiana said on Saturday afternoon that Nate was moving at “an extremely fast rate” of 26 miles an hour, which he said was “almost unheard-of for a storm of this type.”

Even though its speed would limit the amount of time it could deluge any single place, Mr. Edwards said, “this is a very dangerous storm nonetheless.” 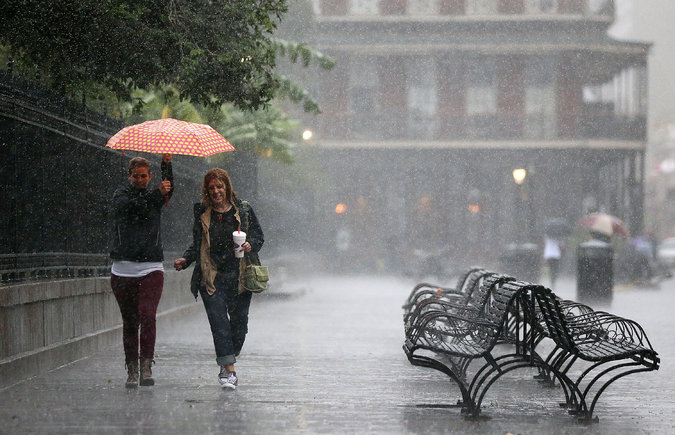 The first bands of rain lashed New Orleans Saturday afternoon, as the storm made its way north from the Gulf of Mexico. Credit Sean Gardner/Getty Images

“It has proven to be very deadly in Honduras and Nicaragua and that area,” Mr. Edwards said. “We have to make sure we are not taking it lightly.” At least 22 storm-related deaths have been reported in Central America.

At the 17th Street Canal between New Orleans and Metairie, La., workers from the Army Corps of Engineers lowered a set of enormous gates at the mouth of the canal. On Friday, divers checked the beds that the gates rest on to make sure that they would be able to close.

In 2005, there were no gates there or at the three other major canals in New Orleans. Katrina’s surge pushed water from Lake Pontchartrain into the canals. When levees along those canals breached, much of the city was inundated, and stayed underwater for weeks, until the breaches could be closed and the neighborhoods pumped dry. The corps later acknowledged the hurricane protection system it built was “a system in name only”

Now the corps is building permanent pumping stations at the very end of these canals. Until then, a structure of gates and temporary pumps has been built to protect nearby neighborhoods.

Mayor Mitch Landrieu of New Orleans said at a news conference Saturday that he expected the city’s pump system to function effectively. Of the 120 pumps, 108 were working. “We have plenty enough to deal with the potential rain,” he said. “Everything that we can see, we think we can handle.”

In the afternoon, as Nate’s outer bands hit New Orleans, rain pounded the streets, pushed by heavy gusts. Pedestrians took off running or huddled under overhangs.

Nia Johnson, 23, who lives on Alvar Street a few dozen blocks from the Mississippi River, said she and her family had planned to pile into the car and drive to Lafayette, La., because the streets of her area “always flood.” The power would almost certainly go out because of the high winds, she said, leaving them unable to cook for days.

Many of the larger chain establishments in the French Quarter had closed. But along Bourbon Street, the daiquiri and pizza-slice joints were open, and music spilled out of bars like the Beach, where customers wearing fleur-de-lis-covered ponchos were drinking and watching college football.

Real-time map showing the position and forecast for Hurricane Nate. 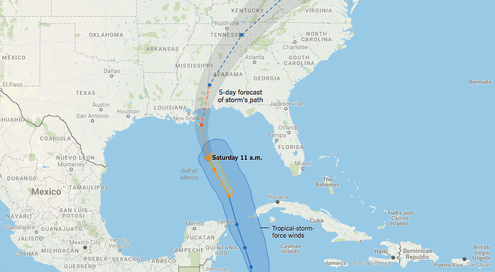 Bridesmaids tried to stay dry in front of Arnaud’s restaurant, where a Rolls-Royce waited for the bride and groom. Around the corner, a wedding party was out on a second-floor balcony despite the splitting rain.

The storm nevertheless ground other parts of the central Gulf Coast to a halt. The popular resort town of Orange Beach, Ala., was empty except for ominous red flags whipping in the breeze; the casino city of Biloxi had mostly emptied of the thousands of visitors who had come to the area for Cruisin’ the Coast, a showcase of 8,200 classic cars. On top of that, the Mississippi Gaming Commission closed the casinos here, leaving the waterfront Beau Rivage and other casinos eerily dark.

“Now it’s just like a ghost town,” said Faith Phillips, 30, a dialysis patient care technician who was waiting for dinner at Waffle House, looking at the Beau Rivage as water encroached on parking lots nearby. “You wouldn’t believe that all of this was full.”

Just a few hours earlier, there had been an air of calm along the coast.

Merlin and Suzie DeCorte of Metairie, La., stopped at the R & O restaurant with their son Jacob, 8, near the 17th Street Canal in New Orleans, all wearing Louisiana State University T-shirts.

“It didn’t seem like it was going to be that bad,” Ms. DeCorte said of the storm. They had more time, she said, to get away from the city if needed.

In Gulfport, Miss., Rich Hazen and his wife, Dawn, of Diamondhead, Miss., were completing their errands with a decided sense of normalcy.

“Church hasn’t been canceled for this evening,” Ms. Hazen said.

“If they close,” Ms. Hazen said, “then you know you’re in trouble.”

By JESS BIDGOOD and JOHN SCHWARTZ

Jess Bidgood reported from Biloxi, Miss., and John Schwartz from New Orleans. Reporting was contributed by Katy Reckdahl and Amy Virshup from New Orleans, Kalyn Wolfe from Orange Beach, Ala., and Vivian Wang from New York.