IN 2017, THE OCEANS WERE BY FAR THE HOTTEST EVER RECORDED... 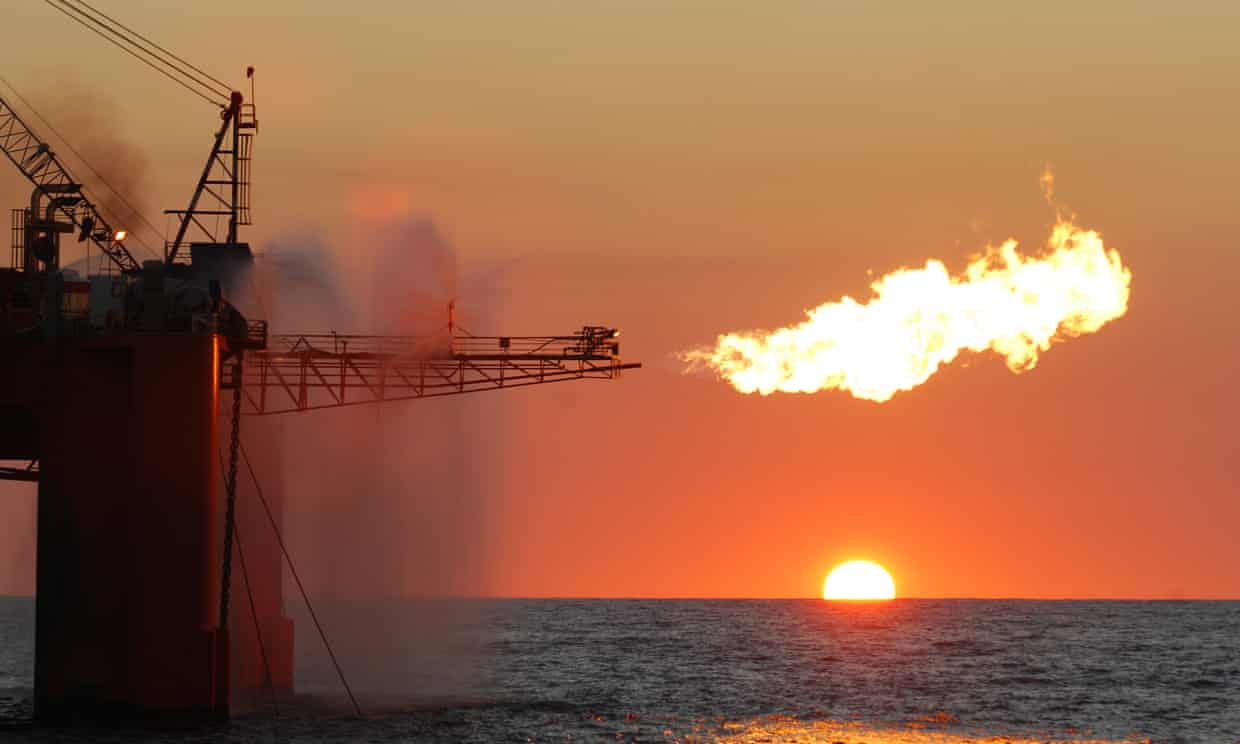 A flare from an ocean-based oil rig burning LNG as part of its exploration activities. Photograph: Dazman/Getty Images/iStockphoto

The second-hottest year recorded at Earth’s surface was the hottest in its oceans...

Among scientists who work on climate change, perhaps the most anticipated information each year is how much the Earth has warmed. That information can only come from the oceans, because almost all heat is stored there. If you want to understand global warming, you need to first understand ocean warming.

This isn’t to say other measurements are not also important. For instance, measurements of the air temperature just above the Earth are really important. We live in this air; it affects us directly. A great commentary on 2017 air temperatures is provided by my colleague Dana Nuccitelli. Another measurement that is important is sea level rise; so too is ocean acidification. We could go on and on identifying the markers of climate change. But in terms of understanding how fast the Earth is warming, the key is the oceans.

This important ocean information was just released today by a world-class team of researchers from China. The researchers (Lijing Cheng and Jiang Zhu) found that the upper 2000 meters (more than 6000 feet) of ocean waters were far warmer in 2017 than the previous hottest year. We measure heat energy in Joules. It turns out that 2017 was a record-breaking year, 1.51 × 1022 Joules hotter than any other year. For comparison, the annual electrical generation in China is 600 times smaller than the heat increase in the ocean.

The authors provide a long history of ocean heat, going back to the late 1950s. By then there were enough ocean temperature sensors to get an accurate assessment of the oceans’ warmth. Their results are shown in the figure below. This graph shows ocean heat as an “anomaly,” which means a change from their baseline of 1981–2010. Columns in blue are cooler than the 1981-2010 period, while columns in red are warmer than that period. The best way to interpret this graph is to notice the steady rise in ocean heat over this long time period. 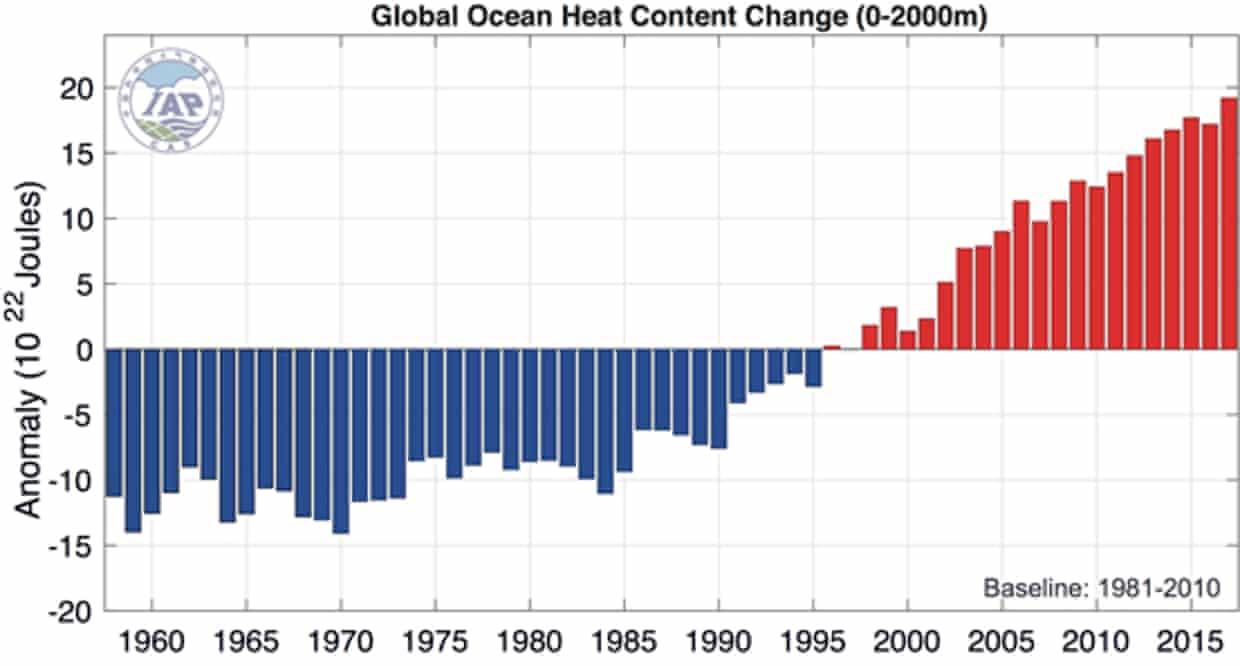 What is interesting is that from year to year (or over the span of a few years), the heat in the oceans may increase or decrease. This is because there are natural fluctuations that can transfer extra energy to or from the waters. One such natural event is the well-known El Niño/La Niña cycle in the Pacific Ocean. During an El Niño, the Pacific Ocean tends to have very warm waters at the surface, which causes heat loss to the atmosphere (so the ocean cools and the atmosphere warms). Conversely, during a La Niña, the reverse process occurs.

There are other fluctuations and natural occurrences like volcanic eruptions and other changes in ocean currents. But it just means we don’t want to take any one year as proof of global warming. The fact that 2017 was the oceans’ hottest year doesn’t prove humans are warming the planet. But, the long term upward trend that extends back many decades does prove global warming. The graph above is the most important image to show someone who denies the reality of a changing climate.

It’s interesting to look at the top five years on record in terms of ocean heat; they are listed below.

Note that these are the five hottest years ever recorded. Truly astonishing.

The authors went a bit further and investigated how the heat was input into the oceans by region. They found that in 2017, a lot of heat was deposited in the Atlantic and Southern Oceans. The authors also calculated that all this heat resulted in approximately 2 mm rise in sea level (as water warms, it expands and so that ocean levels rise).

Further consequences of this heating include declining oxygen levels in the oceans, bleaching of coral reefs, and melting of both sea ice and ice shelves (the latter of which which will also raise sea levels). We are observing these effects. Arctic ice is undergoing a long-term decline, and it’s possible the Arctic will become ice-free. Massive coral bleaching events have been recorded, particularly in the waters off of Australia. The point is, the effects of global warming aren’t just academic; they are real.

The consequences of this year-after-year-after-year warming have real impacts on humans. Fortunately, we know why the oceans are warming (because of human greenhouse gases), and we can do something about it. We can take action to reduce the heating of our planet by using energy more wisely and increasing the use of clean and renewable energy (like wind and solar power).