IN A PARCHED CORNER OF XINJIANG, ANCIENT WATER TUNNELS ARE RUNNING DRY... A Uighur man drives his donkey and cart past a well to draw water from a karez in Turpan, China. The wells provide access to the karez channels and allow for maintenance and ventilation. After centuries of nourishing the people of the parched region, the karez are drying up. (ADAM DEAN/NYT)

Although scientists say global warming has shrunk the glaciers that feed the elaborate irrigation system, the more immediate threat is the soaring demand for water from the petroleum drillers and industrial-scale farmers who are sucking the Turpan Basin dry...

It is an improbable journey that begins on the highest peaks of the Tianshan Mountains, where glacial snowmelt descends across one of the world’s most arid landscapes to reach the lush oasis communities of Turpan, an ancient Silk Road outpost.

Powered by gravity, the water — pure and cold — makes the voyage underground, traveling through scores of subterranean channels, some of them 15 miles long and 100 feet deep, that were built 2,000 years ago by the pastoralists who settled the inhospitable corner of China’s far western Xinjiang region.

Known as karez, the system of channels is an engineering marvel that has long fascinated scientists and filled Turpan’s ethnic Uighurs with pride.

“Our ancestors were amazing because they built these without machines,” said Salayidin Nejemdin, 29, whose family has been growing grapes in Turpan for generations. “Without them, we would not be able to live in such a harsh place.”

But after millenniums of nourishing the region’s farmers, goat herders and cross-continental traders, the karez channels of Turpan are drying up. Although scientists say global warming has shrunk the glaciers that feed the elaborate irrigation system, the more immediate threat is the soaring demand for water from the petroleum drillers and industrial-scale farmers, who are sucking the Turpan Basin dry.

There are slightly more than 200 working karez in the region, down from nearly 1,800 in the 1950s, according to government figures. Every year, up to a dozen of the underground tunnels run dry. Others, contaminated by oil, are abandoned.

Shalamu Abudu, a hydrology expert at Texas A&M AgriLife Research Center, who has written extensively about Turpan’s hand-dug tunnels, said their disappearance threatens a way of life that has persevered against all odds.

Turpan, he noted, occupies one of the world’s hottest locales: a parched depression, devoid of rivers, that receives an average of just over a half-inch of rainfall a year.

“The karez is a symbol of our civilization,” said Abudu, a Uighur, who until recently worked for the state-run Xinjiang Water Resources Research Institute. “It is something we feel very emotional about.” 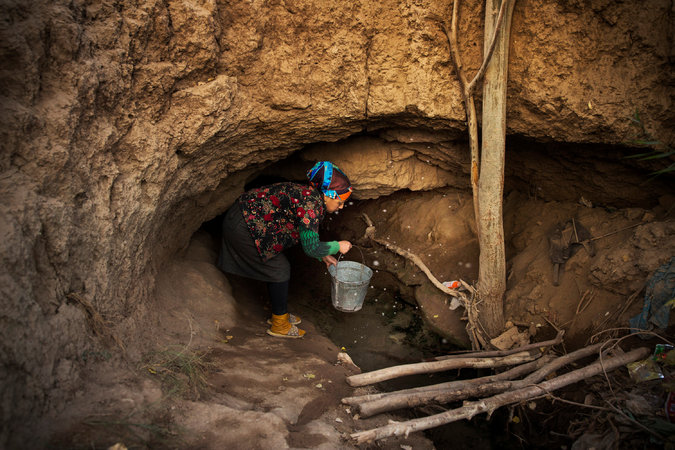 Collecting water from a karez in Turpan. “Our ancestors were amazing because they built these without machines,” Salayidin Nejemdin, whose family has grown grapes there for generations, said of the karez channels. Credit Adam Dean for The New York Times

The water helps sustain the region’s half-million residents and ensures that Turpan’s family farms can grow the grapes that have shaped the city’s identity for centuries. Grape arbors grace nearly every home, and the rural landscape is dotted with imposing brick-and-mud drying towers, where the grapes are turned into raisins.

Standing beneath a tangle of grape vines, Mijiti Saludin, 32, said he and his wife were forced to buy water from the municipal government after the karez across from their home ran dry several years ago. “We used to get it for free, but now we have to pay for our water and it isn’t very clean,” he said.

He led a visitor to an opening in the chalky gray earth and into a tunnel just tall enough to crouch inside. When he was a child, he recalled, the entire community would turn out each spring to clean out the karez, using buckets to remove silt that impeded the flow of water. “Every family would send a young man, but now it’s hard to get people to work for free,” he said.

The Chinese government recognizes the threat to the region’s karez, and in recent years it has sought to ban the drilling of new wells that have contributed to a steady drop of the water table. In 2008, the regional government announced a $182 million project, funded in part by a loan from the World Bank, to protect and rehabilitate the system. 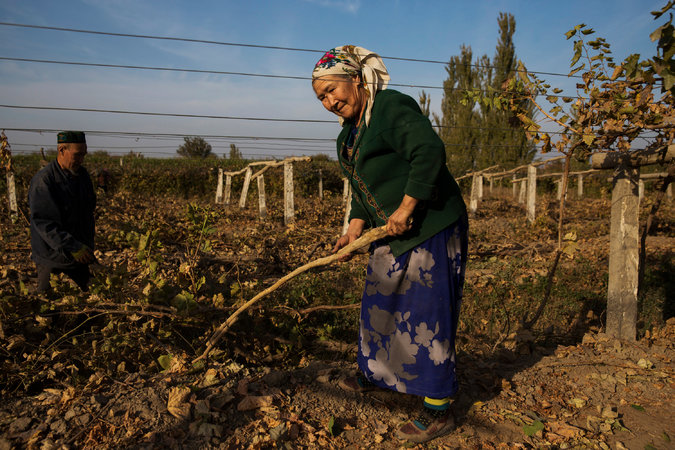 Preparing the vineyards before winter. Water from the karez tunnels ensures that Turpan’s family farms can grow the grapes that have shaped the city’s identity for centuries. Credit Adam Dean for The New York Times

According to government estimates, the aquifer beneath the Turpan Basin shrinks by about 3 million cubic meters a year, much of it because of oil drilling and agriculture.

Despite efforts to keep the karez system alive, some officials appear resigned to its demise. “There is no need to make a fuss about the drying of the karez,” Lu Zhen, the former head of the water resources research institute in Turpan, told the state-run People’s Daily newspaper. “It is a historical certainty that the karez be replaced.”

The origins of Turpan’s karez are unclear, though experts note their similarity to the underground qanat, or canals, found in Iran, Iraq and water-starved swaths of Central Asia.

Given Turpan’s role as a vital pit stop on the northern route of the Silk Road, Abudu of Texas A&M said the technology was probably introduced by Persian traders and then improved by local Uighurs.

“Although the length and method of construction of Turpan’s karez are different from others, the basic principles of how they work is the same,” he said.

Those principles are at once simple and impossibly complex.

Most karez start at the foot of the Tianshan Mountains, tapping into subterranean aquifers fed by glacial runoff. There are underground dams and reservoirs, but a hallmark of the system is the vertical wells, dug every few dozen feet, that provide access to the channels and allow for maintenance and ventilation.

Viewed from the air, the wellheads look like oversized anthills pocking the expanse of lifeless desert. 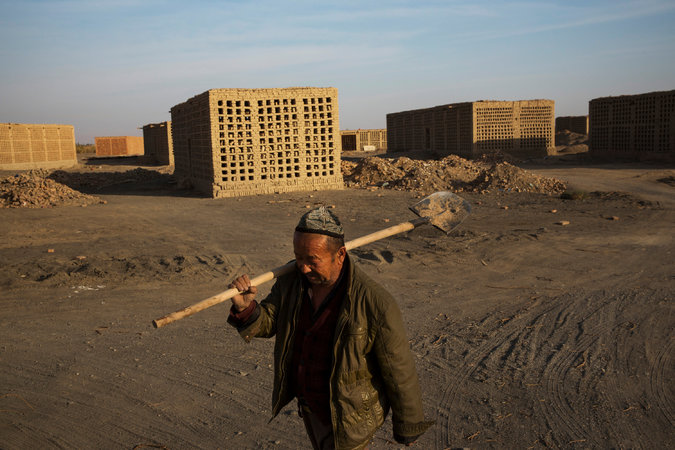 Grape arbors grace nearly every home in Turpan, and the landscape is dotted with brick-and-mud drying towers, where the grapes are turned into raisins. Credit Adam Dean for The New York Times

By constructing the system entirely underground, its creators sought to shield the water from animal droppings, silt and — more importantly — the evaporating power of the sun, which regularly sends summertime temperatures above 110 degrees Fahrenheit.

Residents share a deep reverence for the karez, and they try to enforce rules that bar bathing or washing clothes directly in the waterways.

“In the winter it’s warm and in the summer it’s cool,” said Nejemdin, the farmer, as he walked down stairs that provide access to a rushing underground stream that skirts the edge of his family’s compact farmstead, a traditional walled compound shaded by mulberry trees and grape-laden trellises.

The city government recently installed a pipeline to bring water to his neighborhood from a distant reservoir, but Nejemdin said his family preferred to use water from the karez. “The piped water tastes like medicine,” he said.

With so many karez drying up, he said it was a matter of time before he was forced to buy water from the city. The thought made him scowl.

“Our ancestors were so smart, banding together to solve the water problem,” he said, “but these days, being smart is not enough to keep our traditions alive.”