IN A SHOCK TO NO ONE, SEPTEMBER WAS WARMEST SUCH MONTH ON RECORD...

The planet's hot streak is crawling to a temporary end, but it's not over quite yet. September was the hottest such month on record, according to NASA, coming in at 0.91 degrees Celsius, or 1.6 degrees Fahrenheit, above average. This marks nearly a year straight of record heat, according to NASA, with 11 of the past 12 months ranking as the warmest on record...

September's record warmth assures that 2016 will be the warmest calendar year on record, taking over the top spot from 2015.

September only narrowly beat the previous warmest September, which occurred in 2014, making it a statistical tie, according to NASA.

According to a press release, September 2016's global average temperature was just 0.004 degrees Celsius, or 0.0072 degrees Fahrenheit warmer than September 2014. 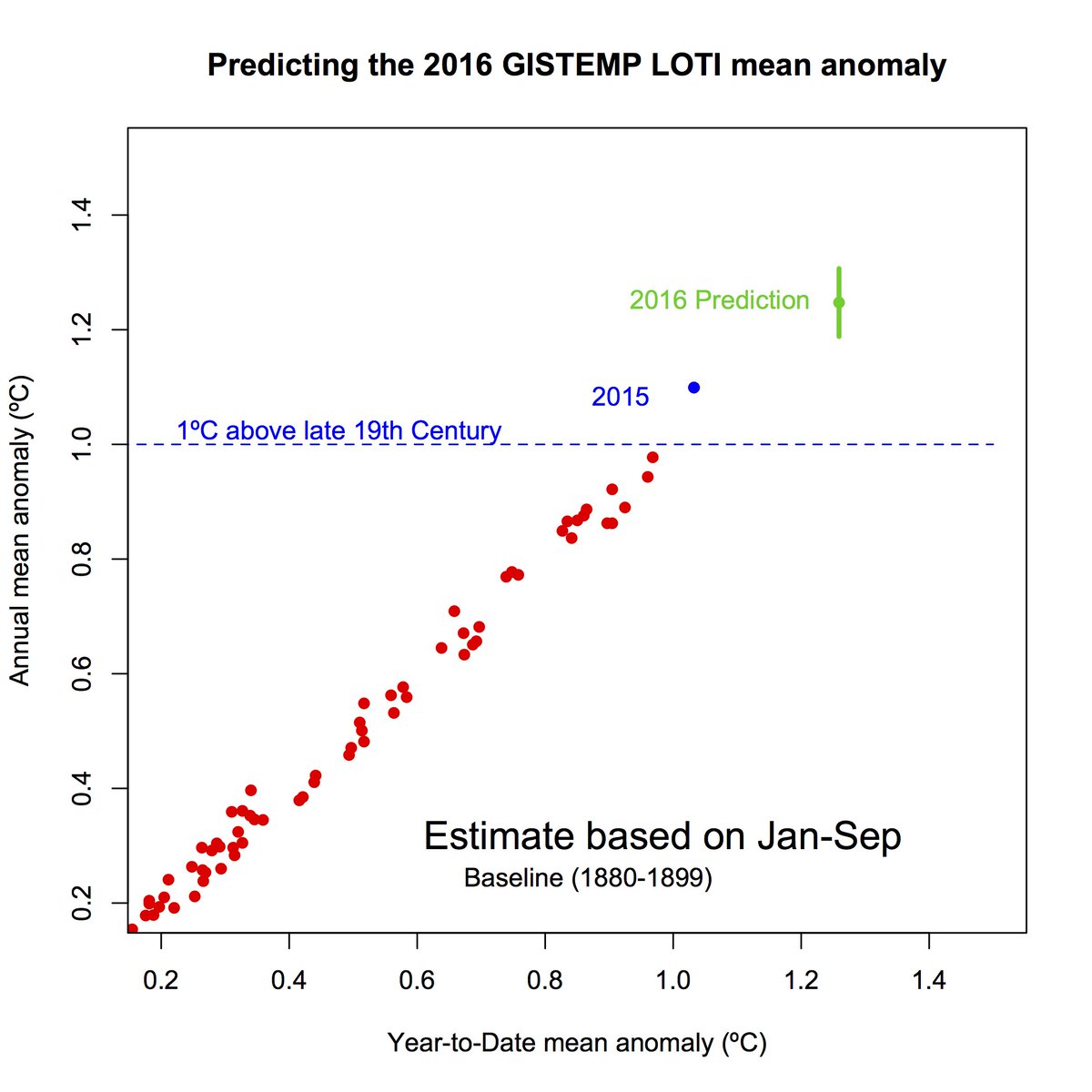 September's temperature anomaly was considerably lower than that for other months in 2016, which blew away historical benchmarks. July of this year was not only the hottest July, but also the hottest month the planet has seen since instrument records began in 1880.

That milestone was tied in August, which beat the previous record for that month by 0.15 degrees Celsius, or 0.27 degrees Fahrenheit.

Of the 11 record warm months in NASA's database, seven had temperature anomalies that were at or greater than 1-degree Celsius, or 1.8 degrees Fahrenheit, above the 20th century average. Before this warm streak, this monthly threshold had never been crossed before.

Related: You are almost assuredly living in the hottest year ever recorded, according to NASA...

To climate scientists, such a threshold is significant particularly because world leaders are seeking to limit global warming to at or below 2 degrees Celsius, or 3.6 degrees Fahrenheit, below preindustrial levels through 2100.

According to the National Oceanic and Atmospheric Administration, which also keeps global temperature records, there have been 16 straight warmest months (September could become the 17th straight month of record warmth), which is unprecedented.

The September record virtually eliminates any doubt that 2016 will beat last year for the title of the warmest year on record.

“We continue to stress that while monthly rankings are newsworthy, they are not nearly as important as long-term trends,"  NASA's Gavin Schmidt, who directs the Goddard Institute for Space Studies in New York, said in a statement.

The monthly analysis comes from data gleaned from about 6,300 meteorological stations around the world, ship- and buoy-based instruments measuring sea surface temperature, and Antarctic research stations.

The reading for September is preliminary, with adjustments possible as more information comes in. For example, NASA announced Monday that the June temperature record had been revised downward to make it the third-warmest such month on record. Had this revision not been made, September would have marked a solid year straight of warmest months.

The extraordinarily warm year of 2016 has brought flood disasters to the U.S. — the most recent of which devastated parts of North Carolina — as well as in China. The flooding in North Carolina, which was the result of Hurricane Matthew combined with previous heavy rainfall earlier in the year, has broken all-time records in many locations in that state.

Kyle Hawley, right, and Trey Wood, pilot their boat through the flooded streets of their neighborhood in Greenville, N.C. on  Oct. 12, 2016. Image: Brian Blanco/AP

Typically hot locations, such as India, Kuwait and Iraq, set new benchmarks for what constitutes their hottest days.

Meanwhile, the world's oceans have been suffering through the longest-lasting global coral bleaching event on record, which is now expected to last into 2017.

Meanwhile in the Arctic, both the Northwest and Northeast Passages were open for navigation, with a massive cruise ship passing through the Northwest Passage for the first time, carrying more than 1,000 passengers and crew.

In addition, a small sailboat has nearly completed its circumnavigation of the Arctic, during which it passed through both the Northeast and Northwest Passage in a bid to raise awareness of climate change impacts. During much of its voyage the crew saw little to no sea ice.

Arctic sea ice hit the second-lowest level on record, which continues the long-term trend toward a seasonally ice-free Arctic.