IN AN AGE OF ALTERNATIVE FACTS, BILL NYE’S NEW SHOW BRINGS REAL ONES... 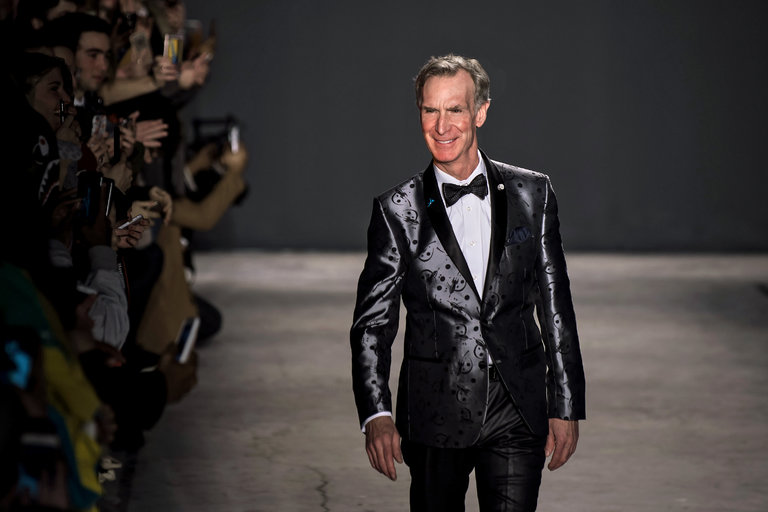 As he prepares to launch a fact-filled show into a fact-challenged world, Bill Nye, a.k.a. the Science Guy, is looking on the bright side...

“You have to be optimistic,” the author, engineer and television personality said in a phone interview. “You’re not going to solve global problems or address global issues without being optimistic. If you don’t think you can do anything about it, you won’t.”

His new program, “Bill Nye Saves the World,” will premiere as a Netflix original series on April 21. In a statement, Netflix said, “Each episode will tackle a topic from a scientific point of view, dispelling myths, and refuting antiscientific claims that may be espoused by politicians, religious leaders or titans of industry.”

Mr. Nye, 61, will be joined by celebrity guests like the model Karlie Kloss, the actor Rachel Bloom and the fashion consultant Tim Gunn. A Netflix representative said the 13 episodes, each 30 minutes long, will be released all at once.

A new trailer for the series was released on Wednesday.

With President Trump’s administration embroiled in debates over blatant falsehoods, “alternative facts,” and “fake news,” Mr. Nye’s fans are saying the timing of this show couldn’t be better.

But the program is not a response to last year’s election. Netflix announced that it was in the works in August, and filming ended in October. In any case, Mr. Nye said: “It’s just a TV show. People don’t have to watch it.”

Mr. Nye is famous for his Emmy Award-winning series “Bill Nye the Science Guy.” But fans of that kid-friendly 1990s classic may be disappointed to learn that the upcoming series will have an entirely different format – it’s a talk show, not a children’s’ program.

“We have guests, we have a panel of experts, we have what’s essentially a monologue, and we have comedy video pieces that are inserted,” he said. “The comedy bits,” he added, “are brilliant!”

Mr. Nye, who is known for wearing bow-ties and has some background in stand-up comedy, never fails to inject a dose of lighthearted humor into his talks and media appearances.

Although it is clear he has fundamental disagreements with much of the Republican establishment, he seems to approach hot topics like climate change and the reproductive rights of women with a measure of restraint, deliberately showing respect for opposing viewpoints even when they frustrate him.

Bill Nye: Can We Stop Telling Women What to Do With Their Bodies? Video by Big Think

And while he may get impatient with policy makers who reject scientific findings, he sees no point in getting testy. “As good as it might make us feel to call other people names, it’s probably not in our medium- or long-term interest,” he said. “Optimism may be counter to divisiveness.”

The new show will tackle a range of subjects including sex, climate change, technology and alternative medicine. It’s not necessarily meant to be a political program, but Mr. Nye acknowledges that these days, issues like climate change are inherently hot-button – even when they shouldn’t be.

“We in the climate science community didn’t politicize it. Other people did,” he said. “People who want to preserve the fossil fuel industries, the extraction industries.”

Mr. Nye said he hoped that his show would be picked up for a second season, but there are no guarantees. In the meantime, his plate is full for the coming months. This year he will release a children’s book series, “Jack and the Geniuses,” and a general interest book for adults called “Everything All at Once: How Nerds Solve Problems.”

He’s also thinking about attending the March for Science in Washington on April 22, even though he is not involved in organizing the event.

And he’ll keep doing whatever he can to make sure that science and critical thinking have a place in political dialogue. “We’ll see what happens, but I’m very proud of the shows,” he said of his Netflix series. “I hope they do influence some people.”