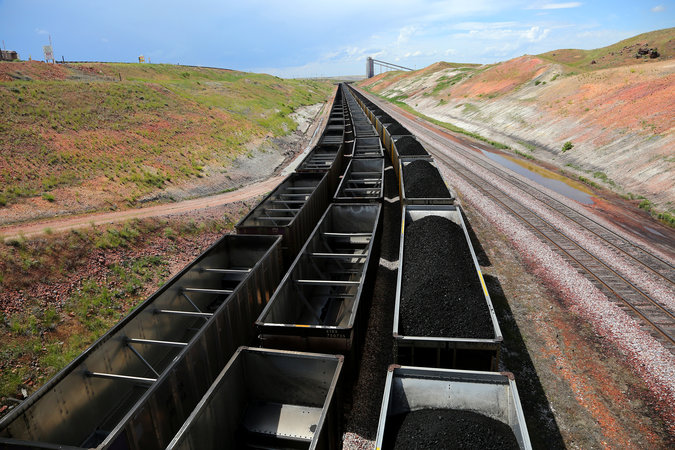 WASHINGTON — The Obama administration announced on Friday a halt to new coal mining leases on public lands as it considers an overhaul of the program that could lead to increased costs for energy companies and a slowdown in extraction...

“Given serious concerns raised about the federal coal program, we’re taking the prudent step to hit pause on approving significant new leases so that decisions about those leases can benefit from the recommendations that come out of the review,” said Interior Secretary Sally Jewell. “During this time, companies can continue production activities on the large reserves of recoverable coal they have under lease, and we’ll make accommodations in the event of emergency circumstances to ensure this pause will have no material impact on the nation’s ability to meet its power generation needs.”

The move represents a significant setback for the coal industry, effectively freezing new coal production on federal lands and sending a signal to energy markets that could turn investors away from an already reeling industry. President Obama telegraphed the step in his State of the Union address on Tuesday night when he said “I’m going to push to change the way we manage our oil and coal resources so that they better reflect the costs they impose on taxpayers and our planet.”

Last year, Mr. Obama used his executive authority under the Clean Air Act to complete regulations that would limit carbon dioxide emissions from coal-fired power plants, the nation’s largest source of planet-warming pollution. Republicans have attacked the rules, which could lead to the closing of hundreds of coal plants, as a “war on coal.” A halt to new leases would go even further by leaving coal unmined.

The action is certain to further inflame a political debate over the federal government’s control of public lands, most recently illustrated by an armed takeover of a wildlife refuge in Oregon. About 40 percent of the nation’s coal is mined on public land, and most of that land is in the Powder River Basin of Wyoming.

“It appears that they’re going after the federal coal leasing program with the intention of keeping coal in the ground,” said Luke Popovich, a spokesman for the National Mining Association.

But companies can continue to mine the coal reserves under lease, estimated to be enough to sustain current levels of production from federal land for about 20 years, according to the administration official.

“Even as our nation transitions to cleaner energy sources, building on smart policies and progress already underway, we know that coal will continue to be an important domestic energy source in the years ahead,” Ms. Jewell said. “We haven’t undertaken a comprehensive review of the program in more than 30 years, and we have an obligation to current and future generations to ensure the federal coal program delivers a fair return to American taxpayers and takes into account its impacts on climate change.”

Mr. Obama hopes to make curbing climate change a cornerstone of his legacy. The administration’s action is the latest step in his ambitious efforts to use his executive authority to tackle climate change, though it could be reversed by another president.

As the administration has sought additional ways to discourage production and consumption of the fuel most responsible for global warming, economists have proposed a “production fee” associated with emissions from coal. Administration officials have estimated that cost — tied to what they call the “social cost of carbon” — at about $40 per ton of carbon dioxide produced.

A fee of that size “would shut down the industry on federal lands entirely,” said Alan Krupnick, an economist at Resources for the Future, which studies environmental economics.

He added, “But even a small charge that begins to internalize these costs — say, a couple of dollars per ton — would put the industry on notice.”

The environmental advocacy group 350.org, which led the successful campaign against the construction of the Keystone XL oil pipeline, has since turned its efforts to pushing Mr. Obama to shut down new leases for coal mining on public lands.

“The administration’s top priority needs to be to keep fossil fuels in the ground,” said Jamie Henn, a spokesman for the group. “Any move that increases the cost of extracting fossil fuels on public land.”

This is a long-overdue move. The federal estate should not be used to prop up the profits of an industry that is, along with oil, causing a...

Oh no! Not 'clean' coal! As the coal industry refers to itself.What will we fill the Republican's stockings with now?Thanks. Next step is to...

Another victory in the ‘war on coal’! There is no such thing as ‘clean coal’, that myth has disappeared. We cannot afford the pollution...

Officials at the Interior Department, which oversees the leasing of public lands to energy companies for fossil fuel extraction, have been reviewing for the past year possible updates to the leasing and royalty programs for mining and drilling on government lands.

In 2014, the federal government received about $1.2 billion in leases, royalties and other fees for coal mining on public lands, with a leasing rate of $3 per acre, plus royalties paid on the market value of the coal at the time of extraction.

But a 2013 report by the Government Accountability Office questioned whether the lease and royalty rates accurately reflected the market value of the coal. “The lease payments are notoriously known for being paid below market value,” said Dan Bucks, a former director of the Montana Department of Revenue.

“In the current system, there’s not an open and competitive process; it’s hidden from public view,” he added. “If they established a competitive leasing process, you’d get leasing at market prices. It’s important that there be a fair return to the taxpayer.”

The push to increase the cost to coal companies comes as the industry is struggling after one of its worst years in recent memory. The industry is suffering from a one-two punch from market forces and government policies. For decades, coal has dominated the American electricity market as the cheapest source of fuel, but in recent years, it has been overtaken by cheap natural gas.

At the same time, Mr. Obama’s new climate change regulations are driving electric utilities to shut down coal plants and invest in cleaner sources of energy, including natural gas, which produces half of the carbon pollution of coal, as well as wind and solar power.