IN PERU, DROUGHTS GIVE WAY TO FLOODS AS CLIMATE CHANGE LOOMS... 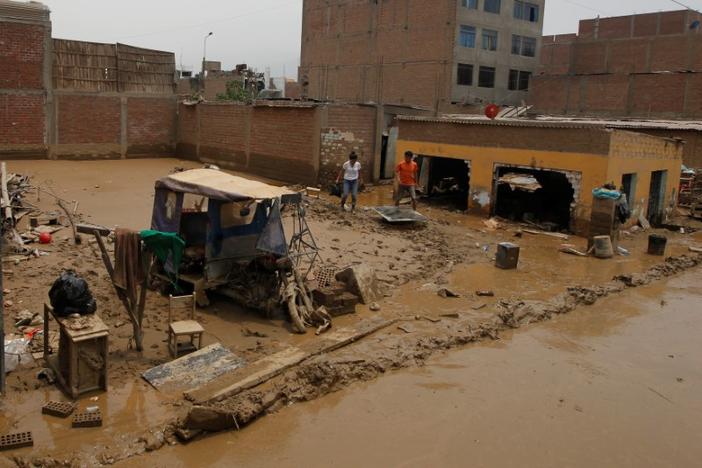 People walk on debris next to damaged houses after a landslide and flood in Lurigancho district in Chosica, Peru February 2, 2017. REUTERS/Guadalupe Pardo
Severe droughts gripping Peru have given way to some of the country's most devastating downpours in decades, catching authorities off guard as they scramble to contain the kind of floods that climate change is expected to make more frequent...

At least 20 people have died in rain-related events in Peru in recent weeks, including six miners buried under a landslide in southern Peru, said Juber Ruiz, with Peru's civil defense institute, on Thursday.

Rivers bursting their banks have pushed thousands from their homes and clogged water treatment plants with rocks and debris - forcing authorities to restrict water use in the capital Lima and Peru's second-biggest city, Arequipa.

"We definitely were not prepared for this type of thing," Prime Minister Fernando Zavala told reporters from a working-class neighborhood in Lima, where dozens of houses were damaged by floods.

Although the downpours have hit Peru during its traditional "landslide season," this year they have been much more intense and have fallen over a broader swath of Peru, Ruiz said.

The precipitation has been fueled by unusually warm temperatures in the Pacific that would indicate a strong El Nino if they hold, said meteorologist Abraham Levy.

While it was too early to attribute the rains to any particular climate phenomenon, Ruiz said they were a wake-up call for Peru to prepare for the kind of extreme weather expected to accompany rising global temperatures.

About half a million people in Peru live in flood plains, according to a recent report by state water agency ANA.

Television footage showed people up to their waists in water and cars being swept away. Last week, a three-story hotel collapsed into a river in the Huancavelica region.

Just a few months ago, wildfires tore across drought-stricken regions of Peru after scientists urged authorities to spread the word about the risks of a severe drought in the Andean-Amazonian region.

The combined impact of the droughts and the rains could shave up to 0.6 percentage point off economic growth, said Pedro Tuesta, an analyst for 4Cast who expects a 3.6 percent economic expansion in 2017.

It could also fan inflation as landslides in the Andes choke off deliveries of food products to Lima - squeezing prices at local markets.