IN U-TURN, EPA SAYS FRACKING CAN POSE A THREAT TO DRINKING WATER... 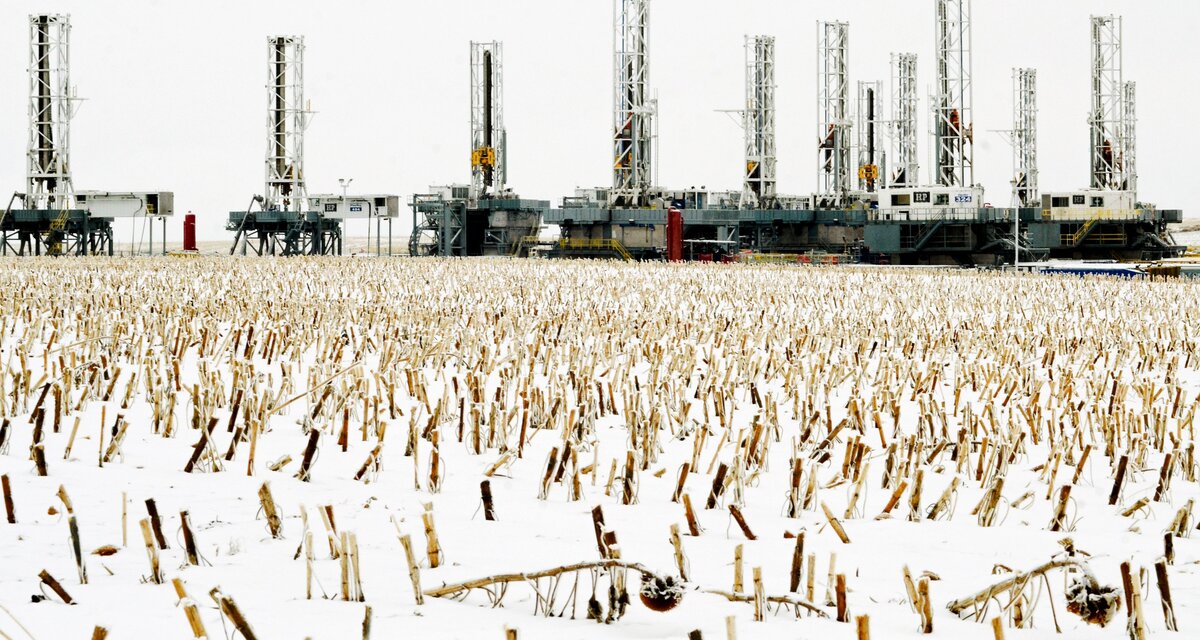 Sunflower stalks punctuate the snow in a field near dormant oil drilling rigs, which have been stacked in Dickinson, N.D., in this Jan. 21, 2016 file photo. Top US shale producers are pushing fracking technology to new extremes to get more oil out of their wells. Andrew Cullen/Reuters

Last summer, in a draft report, the agency concluded hydraulic fracturing has no national 'widespread, systemic' impact on drinking water. In the final version released Tuesday, that sentence was removed...

December 13, 2016 BOULDER, Colo.—When the Environmental Protection Agency released its draft report in 2015 on the safety of hydraulic fracturing, industry groups seized on one sentence as proof that fracking is safe: a conclusion that the process has no national “widespread, systemic impact” on drinking water.

On Tuesday, the EPA released its final report on fracking’s impact on drinking water – a 1,200-page behemoth that was five years in the making – and that sentence was removed.

Instead, the report says that, in certain circumstances, fracking does pose a risk to drinking water.

It’s a major U-turn for the agency, one that was immediately hailed by some fracking critics, who have long said that the process poses significant and poorly understood dangers to drinking water, and criticized by industry groups who say the report creates unjustified doubts about the safety of fracking.

And it’s a U-turn that comes right before a new administration takes power, with a nominated EPA chief who is a fracking advocate.

The report refrains from drawing too many conclusions – including saying with any certainty how severe the risk to drinking water is – and it details many remaining gaps in knowledge and data.

“There are instances where fracking has impacted drinking water resources,” said Thomas Burke, a deputy assistant administrator and science adviser with the EPA, in a phone call with reporters Tuesday morning. But when it comes to a “national, systemic conclusion” about fracking’s impact, he said that “that’s a different question [that] this study does not have adequate evidence to make a conclusive, quantified statement about.”

Hydraulic fracturing is a process in which large amounts of water, sand, and chemicals are pumped into rock formations underground to fracture the rock and release oil and gas. Critics have long contended that the process poses a risk to drinking water, and some residents near wells have complained about contaminated water, but the industry has insisted it has sufficient safeguards to protect water.

Rather than drawing widespread conclusions, the final EPA report documented identified instances of drinking water contamination and highlighted the insufficiency of evidence to know how frequently contamination exists.

Industry groups immediately criticized the new report, condemning it as politically motivated, and also highlighted the fact that the instances of contamination are still quite small.

“It is beyond absurd for the administration to reverse course on its way out the door,” said Erik Milito, director of upstream and industry operations at the American Petroleum Institute, in a statement. “The agency has walked away from nearly a thousand sources of information from published papers, technical reports and peer reviewed scientific reports demonstrating that industry practices, industry trends, and regulatory programs protect water resources at every step of the hydraulic fracturing process.”

And Energy In Depth, an industry-funded outreach group, emphasized that despite the changed wording, the new report still shows only anecdotal evidence of contamination.

“This study took five years to complete, and in that time EPA found nothing to suggest that fracking is a serious risk to groundwater,” wrote Katie Brown, a spokeswoman for the group, in a response to the EPA report. “If there were any evidence to suggest widespread, systemic impacts to drinking water from hydraulic fracturing, it would have been uncovered in EPA’s five-year study and during the past decade of extensive research. It most certainly was not and EPA’s report reflects that.”

But environmental and health groups say it was the original finding that was both politically motivated and unsubstantiated, and they cheered the fact that the final report rested on science, and also included data and findings from fracking sites in Parker County, Texas; Dimock, Pa.; and Pavillion, Wyo. – all sites where scientists had found early evidence of contamination but where investigations had ended early. The report refrained from drawing conclusions about the role of fracking in contamination at those sites.

“It’s a huge victory that the EPA has stuck to the science with this final report and not gone out on a limb and made pronouncements based more on political considerations than the science,” says Hugh MacMillan, a senior researcher on water, energy, and climate issues at Food & Water Watch, an environmental group that has opposed fracking.

Scott Pruitt, President-elect Donald Trump’s choice to lead the EPA, is the attorney general in Oklahoma, has deep ties to the fossil-fuels industry, and has been a staunch defender of fracking. And one of Mr. Trump’s key energy advisers has been Harold Hamm, a billionaire who was one of the major pioneers in fracking.

The EPA report is unlikely to change any of the next administration’s positions on fracking, but it puts a clear paper trail in place.

“Moving forward, you have an assessment of the science of the impacts of fracking on drinking water,” says Mr. MacMillan. “It’s going to inform decisionmakers at a local level who one would think would be able to exercise some local control over the practice.”

Among the findings in the report were conditions that make drinking-water contamination from fracking more likely. They include water withdrawals from areas with low water availability, particularly in areas with limited groundwater resources; spills during the handling of fracking fluids and chemicals; injection of fluids directly into groundwater or into wells with inadequate mechanical integrity; and storage of fracking wastewater in unlined pits.

“Most of the extraction happens Colorado and eastward, but the western US has some unique risks associated with oil and gas extraction,” says Robert Jackson, a Stanford earth sciences professor who has studied fracking and drinking water, and who helped write a study that raised concerns about the contamination in Pavillion.

The report also added about 400 new chemicals to its list of chemicals associated with fracking, and acknowledged that of the 1,606 chemicals included in the final study, a large number have very little peer-reviewed data around their toxicity.

While the report details large gaps in knowledge and data, getting that data is difficult, says MacMillan, given that the oil and gas industry has control over fracking sites and getting access to the sites is often impossible for researchers.

Ultimately, says Professor Jackson, the final EPA report, without the “widespread, systemic impact” line, “more accurately reflects the body of the report and the state of the science so far.” It "doesn’t say that contamination is normal, but it acknowledges that it happens. It also presents ways to reduce the likelihood of contamination,” says Jackson. “I hope it is helpful to everyone, including the industry. If people know their concerns are being taken seriously, I think they’ll be more likely to support the industry in the future.”

Staff writer Henry Gass contributed to this report from Boston.


To help do something about the climate change and global warming emergency, click here.