Total fire bans issued as parts of Australia swelter in their hottest January on record... 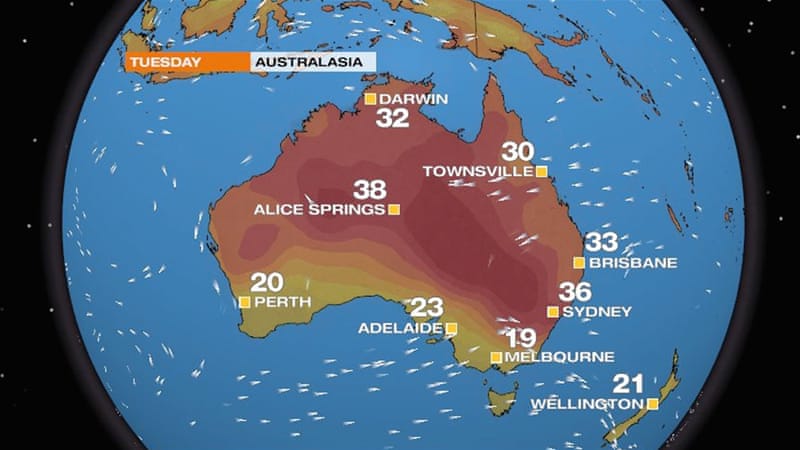 Eastern Australia is in the grip of an intense heatwave which has seen temperature records broken in many parts. Daytime highs have soared into the mid-40s Celsius in parts, leading to fire bans across the country's southeast.

As is often the case, the highest temperatures have been across the interior. The town of Moomba, in the northeast of South Australia, had a top temperature of 45C on Monday. That is still well short of the January record of 49.6C

Meanwhile, the town of Moruya, in southeastern New South Wales, had a high of 43C. The town is located around 300 kilometres to the south of Sydney.

Sydney has been sweltering for some time now and the city's Observatory Hill, has recorded nine days where temperatures have reached 35C and above, equalling the previous record set in the summer of 1895/96.

In terms of the average maximum, minimum and mean temperatures, this month goes down as Sydney's warmest January ever recorded.

North of the state border, Brisbane has also been feeling the heat. Here the average daytime high during January was 31.4C. This is the warmest in 13 years. However, it is well below the record of 32.3C set way back in 1903.

The scorching weather has inevitably led to total fire bans across much of southeastern Australia. The parched conditions remain across New South Wales, the Australian Capital Territory and Victoria.

In the case of Victoria, there is a state-wide ban in place for the first time this summer. The tinder dry grassy paddocks and gusty winds have increased the risk of bush fires breaking out.

The heat will remain in place to the north of New South Wales this week, but Sydney, the Australian Capital Territory and Victoria can look forward to some respite, at least until the weekend when temperatures will edge back up into the low to mid-30s once again.