IS IT OKAY TO ENJOY THE WARM WINTERS OF CLIMATE CHANGE? 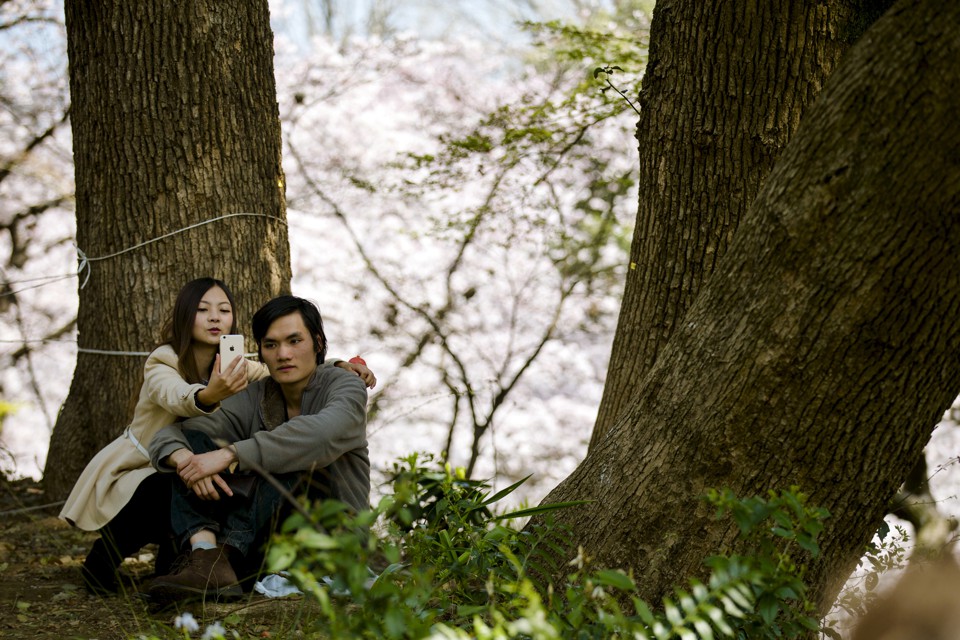 A couple takes a picture of themselves in Ueno Park in Tokyo during cherry-blossom season in March 2015. credit: Rueters

The weather is nice, but it reminds us of the problems to come...

This is not how February is supposed to feel...

From D.C. to Denver, from Charlotte to Chicago, towns and cities across the United States have posted strings of record-breaking summery days in what is normally the final month of winter. Wednesday was only the third time since 1880 that Green Bay, Wisconsin, cracked 60 degrees Fahrenheit in February. Ice on the Great Lakes covers only a quarter of its normal surface area. And parts of Oklahoma and Texas have both already been scorched by 90-degree afternoons.

All in all, the United States has already set more than 2,800 new record high temperatures this month. It has only set 27 record lows.

Most people handle this weather as the gift it is: an opportunity to get outside, run or bike or play catch, and get an early jump on the spring. But for the two-thirds of Americans who are at least fairly worried about global warming, the weather can also prompt anxiety and unease. As one woman told the Chicago Tribune: “It’s scary, that’s my first thing. Because in all my life I’ve never seen a February this warm.” Or as one viral tweet put it:

There is, of course, no single right answer to this query, and it is an ethical or existential concern as much as a scientific one. But when I posed it to the scientists who encounter climate change’s consequences first-hand—in the planet’s expanding deserts, deluged coasts, and bleached coral reefs—they said that it was fine to take the good with the bad when it came to upheavals in Earth’s longterm climate.

Katherine Hayhoe, an atmospheric scientist at Texas Tech University, told me that people shouldn’t hesitate to enjoy unseasonably warm days, whether or not they are caused by climate change.

“It’s a good example of how all of the symptoms of a changing climate are not negative. And if there is something good, then enjoying it doesn’t make [climate change] any better or worse than it would be otherwise,” she said.

Rather, the warm days might prepare people to notice other shifts in how they experience the weather. “As it gets warmer, the negative impacts outweigh the positive impacts,” she said. “This will first look like hotter summers, pests moving northward, and our air-conditioning and water bill going up. Having these unusual days that we really notice, it makes us more aware of how other things are changing, too.”

For the climate-concerned, this is an encouraging theory of change—and it fits with a body of research that suggests people experiencing unusual warmth are more likely to tell pollsters they believe in global warming.

But a study published last year in Nature should make advocates pause. It found that, for the vast majority of Americans, the weather became more favorable and pleasant from 1974 to 2013. Over all, winters have gotten generally warmer and more pleasant for “virtually all Americans,” while summers have not yet become scorching and oppressively humid.

This change has occurred on a shocking scale: On the “pleasantness index” used by the study, Boston in 2013 was as favorable as New York City was in 1976; and present-day St. Louis is nicer than D.C. or Baltimore four decades hence.

This study stands apart from the rest of the climate literature for several reasons. It examines neither how climate change is shaping the weather—it does not pull out a climate signal from the 40 years of weather change, only looking at weather overall—and it does not treat the entire expanse of the country’s land surface area equally. Rather, it wants to know how Americans experience the weather, so its analysis gives more weight to highly populated counties.

The study also omits incidences of extreme weather. Those have increased during the study period, and they will be one of the earliest ways Americans in the Lower 48 experience the consequences of climate change.

“While we’re hearing over and over again that climate change is something we should fear, most people are experiencing it in a way that’s really quite comfortable,” says Megan Mullin, a political scientist at Duke University and one of the authors of the study. “What I take away from this is really a lesson for scientists. My Twitter stream is filled with these maps, over and over again, showing departures from historically average temperatures. In my mind, [that kind of messaging] is not going to motivate the public to treat this as a top priority.”

And their study also found that that motivation is needed now, because—after the middle of the century—climate change will begin to make summers worse:

Under a scenario in which greenhouse gas emissions proceed at an unabated rate … we estimate that 88 percent of the U.S. public will experience weather at the end of the century that is less preferable than weather in the recent past.

But this switch won’t happen “for decades out,” said Mullin. And by then it will be too late to adjust policies to meaningfully mitigate climate change.

All this said, many Americans are already feeling the economic consequences of unseasonable warmth. For instance, peach trees require a certain number of chilling hours—that is, exposure to weather below 45 degrees—in order to produce a bountiful crop. Optimally, Georgia’s peach-farming regions want to experience about 1,000 chilling hours before the arrival of spring. This year, according to the Macon Telegraph, some farms have recorded as few as 470—and they have little hope of seeing temperatures fall again before spring.

This story has been repeated across the country for essentially any plant that requires some amount of wintertime chilling.

“Those of us who have office jobs and bike to work may be enjoying these temperatures, there are a large number of stakeholders in the agricultural community who see doom more clearly in them than we do,” says Kim Cobb, a biogeochemist at Georgia Tech University.

“I know without a doubt that should such unseasonbly warm temperatures continue into the summer, we will see energy bills spike to astronomical levels, see older residents suffer, and see schoolchildren have to stay inside due to temperatures spiking past human thresholds,” she added.

And by the way, are the warm temperatures this month even attributable to the large-scale damage that climate change will wreak? Many climate scientists encouraged some humility. People shouldn’t look to any one day’s weather for confirmation that climate change exists, they said. Rather, Americans should look at the broader trends: specifically, the century-long, planet-wide warming trend, and the fact that eight of the last 10 years have been among the warmest on record.

Mullin said that people should ultimately try to seek out better and more reliable sources than their personal experience of the weather.

“It makes sense that people use this information, but we should try really hard not to. Because it’s not high-quality information,” she said. Rather, we should trust the well-documented trends and studies that point to global warming’s existence and urgency.

And Katherine Hayhoe encouraged thinking about any one day’s weather through a more nuanced lens. “On the science side, the number-one question often is: Is this global warming or not? I really am convinced that’s completely the wrong question to ask,” she told me.

It was like, she said, asking if a heart problem is the result of genetics or lifestyle. “For most of us, the answer is both. And saying—‘Is this heart attack caused by lifestyle or genetics?’—is pointless, because the answer will be both. We can’t change the genetics of our natural weather patterns and variability, but we can change our lifestyle.”

And right now, our planetary lifestyle involves emitting millions of tons of carbon dioxide into the atmosphere every second and slowly, but surely, warming the globe.