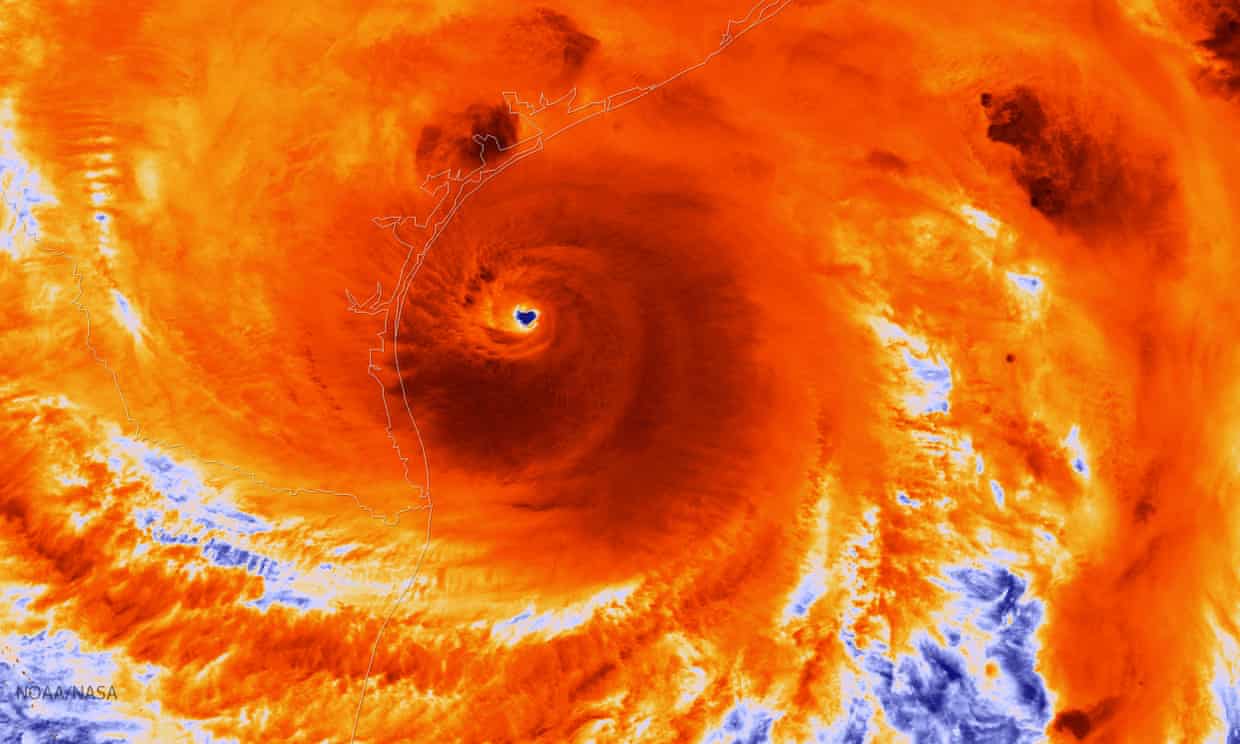 Infrared image of Hurricane Harvey just prior to making landfall along the Texas coast, US. Photograph: NOAA

At least 14 people have died and tens of thousands evacuated as Houston is battered by catastrophic rainfall. Our environment editor unpicks the facts behind the disaster...

A tropical storm that is on course to break the US record for the heaviest rainfall from a tropical system. Meteorologists say the 120cm-mark set in 1978 could be surpassed on Tuesday or Wednesday.

What is the impact so far?

At least 14 people have died, tens of thousands have been evacuated and more have been stranded as catastrophic flooding has paralysed the home of the US oil industry and the fourth most populous city in the US.

Almost certainly, according to a statement issued by the World Meteorological Organization on Tuesday. “Climate change means that when we do have an event like Harvey, the rainfall amounts are likely to be higher than they would have been otherwise,” the UN organisation’s spokeswoman Clare Nullis told a conference.

But hurricanes are nothing new in this part of the world …

Correct. Nobody is arguing that climate change caused the storm, but it is likely to have made it much worse.

There is a proven link – known as the Clausius-Clapeyron equation – that shows that for every half a degree celsius in warming, there is about a 3% increase in atmospheric moisture content. 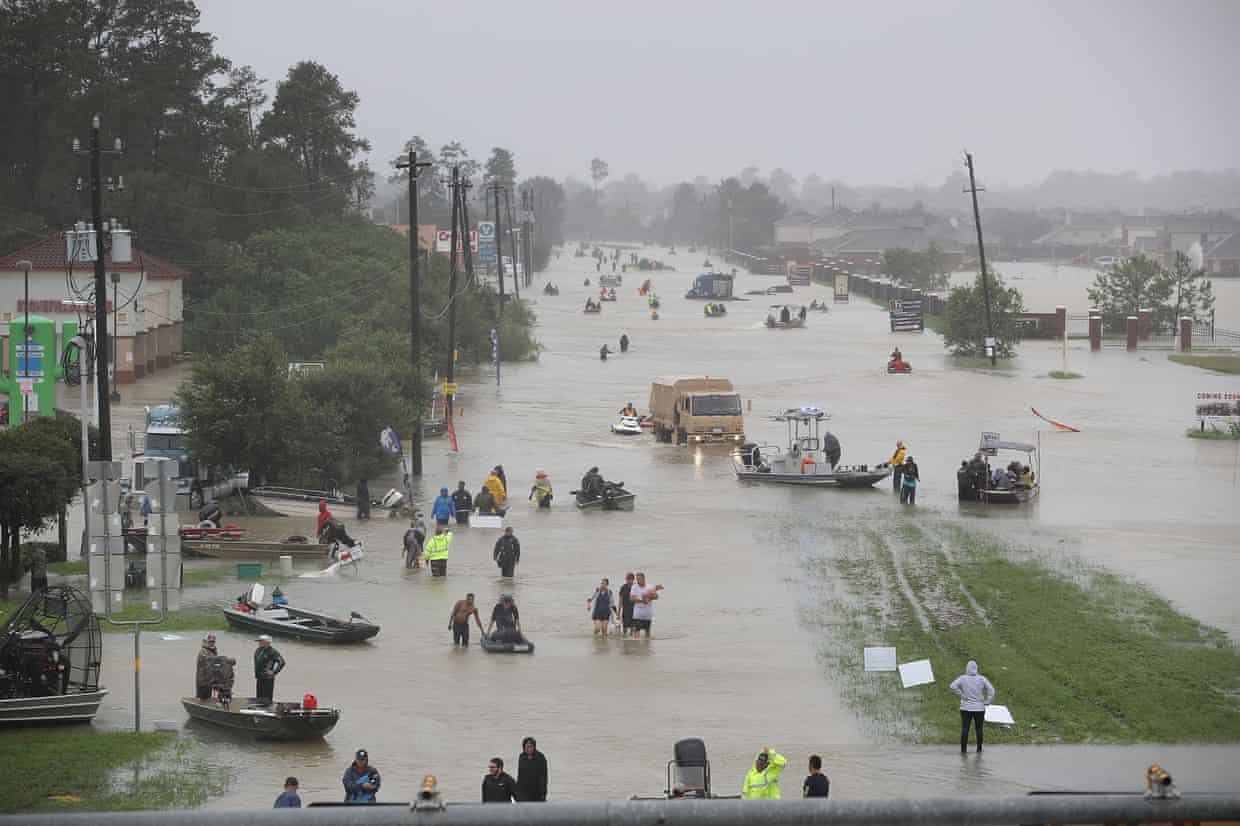 People walk down a flooded street as they evacuate their homes in Houston, Texas Monday. Photograph: Joe Raedle/Getty Images

Is that what happened in Texas?

Was the amount of rain really that unusual?

The US National Weather Service has had to introduce a new colour on its graphs to deal with the volume of precipitation. Harvey surpassed the previous US record for rainfall from a tropical system, as 49.2 inches was recorded at Mary’s Creek at Winding Road in Southeast Houston, at 9.20am on Tuesday.

How do climatologists account for the unusually rapid intensification of Harvey ahead of landfall?

The science here is more tentative, as is the possible link to global warming. Harvey’s wind speed rose by about 45mph in the 24 hours before it reached the coast, according to National Hurricane Center. Computer simulations at Massachusetts Institute of Technology have indicated that similarly rapid increases in storm speeds will be 10 to 20 times more likely to occur by the end of this century than they were during the 1900s as a result of rising greenhouse gas emissions.

The damage has worsened as a result of the duration of the deluge. Harvey appears to have parked above Houston, pumping huge volumes of water from the sea to the sky to the city. Will stationary storms like this become more common in the future?

This is the single most important question posed by Harvey, according to Tim Palmer, Royal Society Research Professor at the University of Oxford. There is not yet a clear link between this and climate change. But scientists have observed a general slowdown of atmospheric summer circulation in the mid-latitudes as a result of strong warming in the Arctic. “This can make weather systems move less and stay longer in a given location – which can significantly enhance the impacts of rainfall extremes, just like we’re sadly witnessing in Houston,” noted Stefan Rahmstorf, a co-chair at the Potsdam Institute for Climate Impact Research. 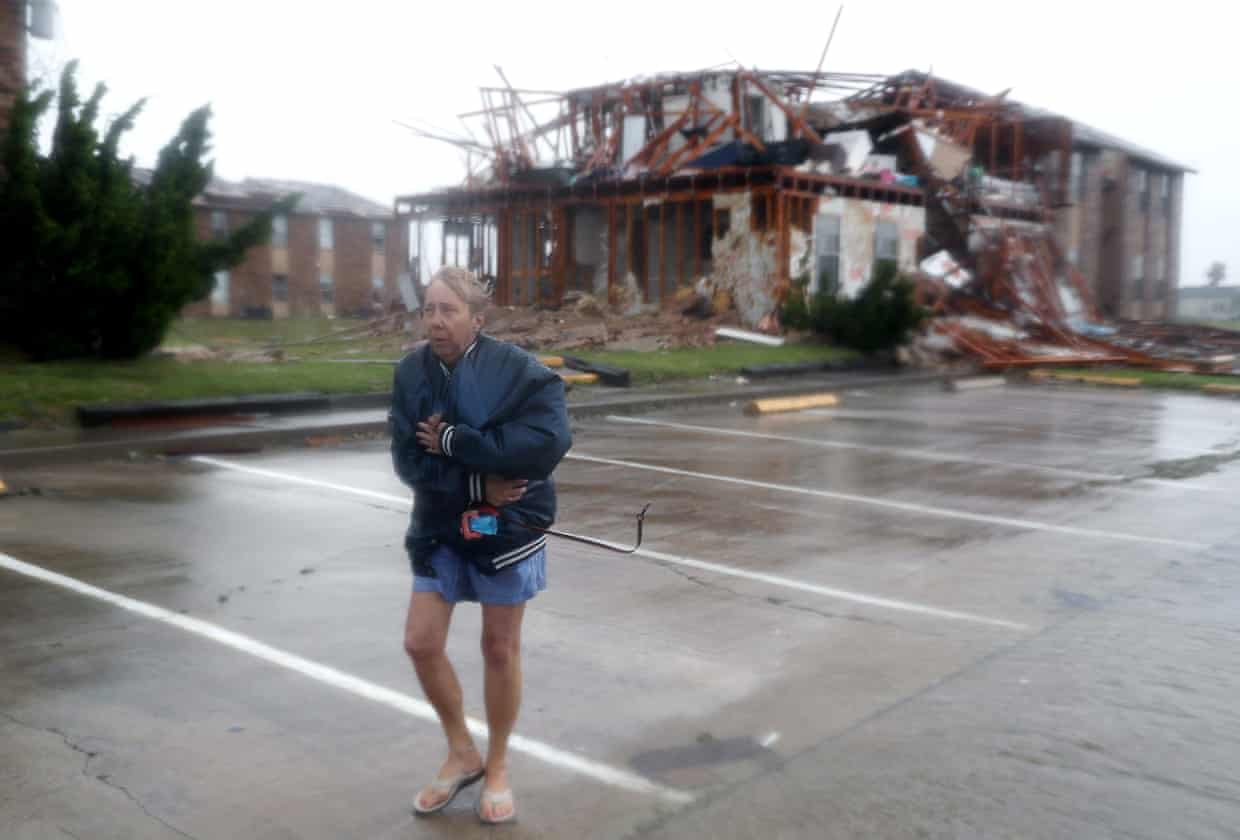 Jacque McKay walks through the apartment complex where she lives on Saturday in Rockport, Texas. McKay said she was able to rescue her dog but lost pretty much everything else. Photograph: Joe Raedle/Getty Images

Can scientists quantify how responsible humans are for extreme weather like this?

Attribution is a relatively nascent science, but increasingly sophisticated computer models use temperature records, emission figures and recent data to calculate how the rise in greenhouse gases has increased the risk of a hotter world. Last year, researchers with World Weather Attribution and the National Oceanic and Atmospheric Administration estimated that man-made emissions nearly doubled the odds of last year’s heavy rains in Louisiana. This summer, they found the heatwave that struck Portugal and Spain was 10 times more likely to have occurred due to global warming. Once the deluge in Texas abates, they may be able to crunch the numbers for Harvey. 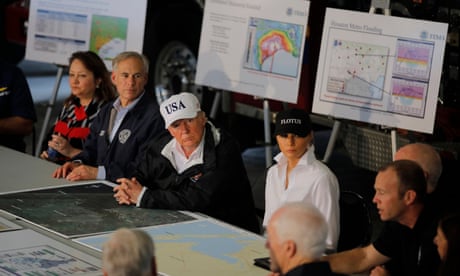 Does the Trump administration acknowledge the link between extreme weather and manmade climate change?

Not as yet. Trump previously called manmade climate change a myth invented by China. As president, he has announced the US will withdraw from the Paris agreement. On Twitter, his take on Harvey has been incredulity: “HISTORIC rainfall in Houston, and all over Texas. Floods are unprecedented, and more rain coming” and “Even experts have said they’ve never seen one like this!”