IT CAN POWER A SMALL NATION. BUT THIS WIND FARM IN CHINA IS MOSTLY IDLE... 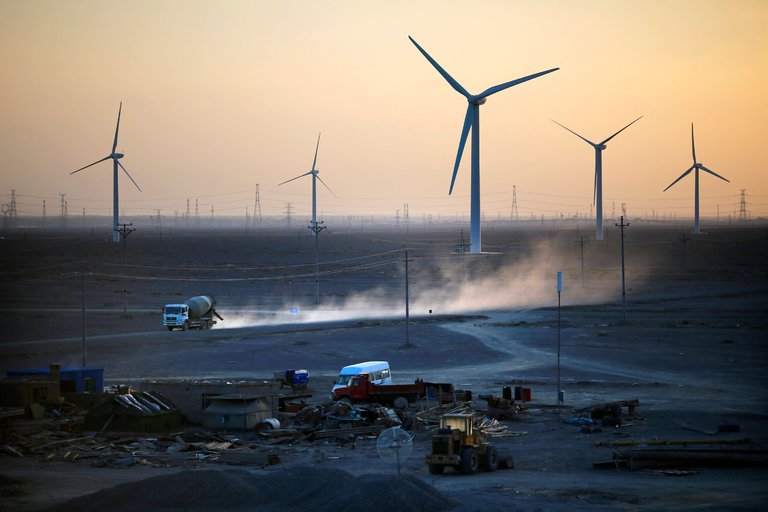 Construction in 2013 near a wind farm in the northwest province of Gansu. More than 92,000 wind turbines have been built across China, capable of generating 145 gigawatts of electricity. Credit Carlos Barria/Reuters

JIUQUAN, China — On the edge of the Gobi Desert, the Jiuquan Wind Power Base stands as a symbol of China’s quest to dominate the world’s renewable energy market. With more than 7,000 turbines arranged in rows that stretch along the sandy horizon, it is one of the world’s largest wind farms, capable of generating enough electricity to power a small country...

But these days, the windmills loom like scarecrows, idle and inert. The wind howls outside, but many turbines in Jiuquan, a city of vast deserts and farms in the northwest province of Gansu, have been shut off because of weak demand. Workers while away the hours calculating how much power the turbines could have generated if there were more buyers, and wondering if and when they will ever make a profit.

“There’s not much we can do right now,” said Zhou Shenggang, a manager at a state-owned energy company who oversees 134 turbines here; about 60 percent of their capacity goes unused each year. “Only the state can intervene.”

China, the world’s largest emitter of greenhouse gases, has pointed to its embrace of wind and solar power and other alternatives to coal to position itself at the forefront of the global effort to combat climate change.

More than 92,000 wind turbines have been built across the country, capable of generating 145 gigawatts of electricity, nearly double the capacity of wind farms in the United States. One out of every three turbines in the world is now in China, and the government is adding them at a rate of more than one per hour.

But some of its most ambitious wind projects are underused. Many are grappling with a nationwide economic slowdown that has dampened demand for electricity. Others are stymied by persistent favoritism toward the coal industry by local officials and a dearth of transmission lines to carry electricity from rural areas in the north and west to China’s fastest-growing cities.

That has left China unable to generate enough renewable energy to make a serious dent in air pollution and carbon emissions, despite the state-driven building spree. Even with its unmatched arsenal of turbines, China still lags the United States. Wind power now accounts for 3.3 percent of electricity generation in China, according to the nation’s National Energy Administration, compared with 4.7 percent in the United States.

Chinese officials have described the challenges facing the wind sector as growing pains, and they say the investments in renewable energy will pay off in the long term. The costs of wind projects are falling rapidly with advances in technology and more efficient construction, making them more competitive with plants powered by fossil fuels like coal and natural gas.

And the government has vowed to continue investing heavily in renewable energy. It said this month that it intended to spend at least $360 billion through 2020 on developing renewable energy sources.

Analysts said that China’s success would depend on its ability to overcome both political and practical obstacles, including resistance to renewable energy from local governments and a lack of turbines near major cities.

“This is partly a political fight,” said Paolo Frankl, head of the renewable energy division at the International Energy Agency. “Still, it’s a very, very robust and solid trajectory.”

Sebastian Meyer, research and advisory director at Azure International, a renewable-energy consulting firm in Beijing, said China was “leapfrogging everybody” with its investments in renewable energy but needed to push through painful policy decisions, such as allowing more flexibility in setting energy prices.

“For years, they’ve been talking about power-sector reform,” he said. “But really they need a different market approach that incentivizes more use of renewables going forward.”

The Jiuquan Wind Power Base, approved by the government in 2008, epitomized China’s ambition to become a global leader in clean energy. The government vowed to invest $17.4 billion by 2020 and build a vast farm capable of generating 20 gigawatts of power, more than the combined wind capacity of several countries. 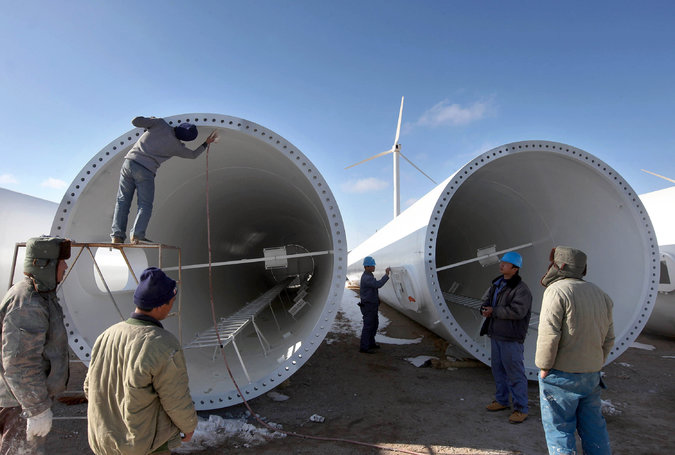 Painting and assembling wind turbines in Gansu Province in 2009. Some of China’s most ambitious wind projects are underused. Credit Doug Kanter/Bloomberg

But the unfinished project has been slow to take off, even as the government continues to build it out.

Part of the problem is the location. Gansu is a barren, mountainous province, chosen for its strong winds and potential for growth. But it is far from the booming cities of eastern China, making transmission of electricity difficult.

Gansu now has some of the highest rates of underutilization in the wind sector in China; in 2015, 39 percent of wind capacity in the province was wasted, according to statistics compiled by the National Energy Administration.

In Gansu and elsewhere, the central government has also run up against local resistance. Advocates for the wind industry contend that local officials have reduced production quotas for wind farms to give an advantage to coal companies.

The coal industry, a major driver of economic growth in many provinces, wields significant influence in China. While the government has pledged to curb the spread of coal plants as part of its plan to make 20 percent of China’s energy renewable by 2030, it has continued to add them in some places.

“The cake is only so big,” said Yan Jing, a Greenpeace activist in Beijing who studies climate change and energy issues. “It’s hard for new energy companies to take a slice from traditional players.”

Even if more transmission lines were constructed, Ms. Yan said, the government would have trouble persuading businesses along China’s heavily developed eastern coast to buy electricity from faraway provinces.

“The authorities failed to consider the demand factor, namely, ‘How can we get closer to buyers?’” she said. “There should be more development of clean energy in eastern parts of China so electricity can be absorbed locally.”

In introducing a new energy plan last week, officials acknowledged that the focus on building turbines far from urban centers had created imbalances. He Yongjian, an official at the National Energy Administration, said the government would now build a majority of new turbines in the east, partly to reduce the need to transmit power long distances.

But building wind farms in the east might be difficult, given the preponderance of coal plants, a lack of strong winds and a scarcity of undeveloped land.

The tepid demand for electricity in an economic downturn has also exacerbated the troubles for renewable energy. Demand for electricity grew by only 0.5 percent in 2015, the slowest rate of growth since 1974, and it is expected to remain weak until consumer spending picks up.

At the Jiuquan Wind Power Base, Mr. Zhou oversees a small wind farm for a branch of China Resources Power Holdings, a state-run energy company based in Shenzhen that operates two wind farms in Gansu. He said the wind industry’s problems had hurt morale and productivity. The branch in Jiuquan has made small cuts in salaries and benefits for its 32 employees because of its challenges in selling electricity. Other wind farms in the area have resorted to layoffs, according to interviews with workers.

Outside the company’s offices, a walled compound along a desert highway, trucks carrying coal rumbled down dusty roads. Mr. Zhou, wearing a bumblebee-yellow uniform and fiddling with a pencil, surveyed the vast stretch of immobile turbines from his desk.

“The only thing I can do is encourage my employees to do a good job,” he said. “I assure them that over the long term, the new energy sector is very promising. The difficulties right now are only temporary.”

A version of this article appears in print on January 16, 2017, on Page A8 of the New York edition with the headline: Windmills Stand Idle in China as Even More Are Being Constructed.