IT’S ABOUT 50 DEGREES WARMER THAN NORMAL NEAR THE NORTH POLE, YET AGAIN... Peer at a map of the Arctic and it glows fluorescent red. The warmth, compared to normal, is again nearly off the charts. It’s crazy and perhaps unsettling, but we have seen it coming...

In my Feb. 1 story, ‘Beyond the extreme’: Scientists marvel at ‘increasingly nonnatural’ Arctic warmth, I stated computer models predicted yet another round of incredible warmth in a week’s time. Current data show these predictions have verified.

Friday’s temperatures very near the North Pole are about 50 degrees warmer than normal, according to a temperature analysis by the National Oceanic and Atmospheric Administration.

Reports from the ground offer further evidence of the unusual intensity of the high-latitude warmth.

On Wednesday, as the flux of warm air surged into the Arctic, the northernmost land station in the world in northern Greenland shot up 43 degrees (24 Celsius) in just 12 hours, cresting the melting point:

In Svalbard, Norway, the island located about midway between continental Norway and the North Pole, high temperatures in the settlement of Longyearbyen have hovered near 40 degrees this entire week, compared with normal highs in the low-to-mid teens. Each day, these temperature were near or exceeded records.

The warmth funneled toward the North Pole as winds converged winds between a monster storm in the North Atlantic and a giant area of high pressure over northern Europe.

January 2017 was another exceptional month using the 19-station #Arctic data... 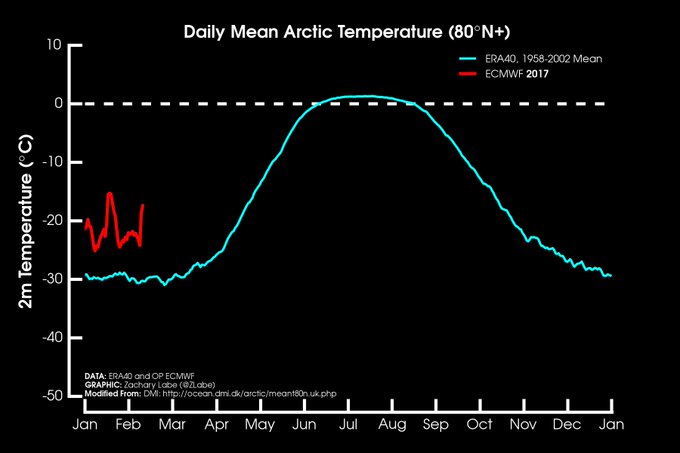 Extreme temperature spikes such as this one have occurred multiple times in the past two winters, whereas they only previously occurred once or twice per decade in historical records according to research published in the journal Nature.

As Mashable science writer Andrew Freedman put it: “Something is very, very wrong with the Arctic climate.”