IT'S NOT OKAY HOW CLUELESS DONALD TRUMP IS ABOUT CLIMATE CHANGE... 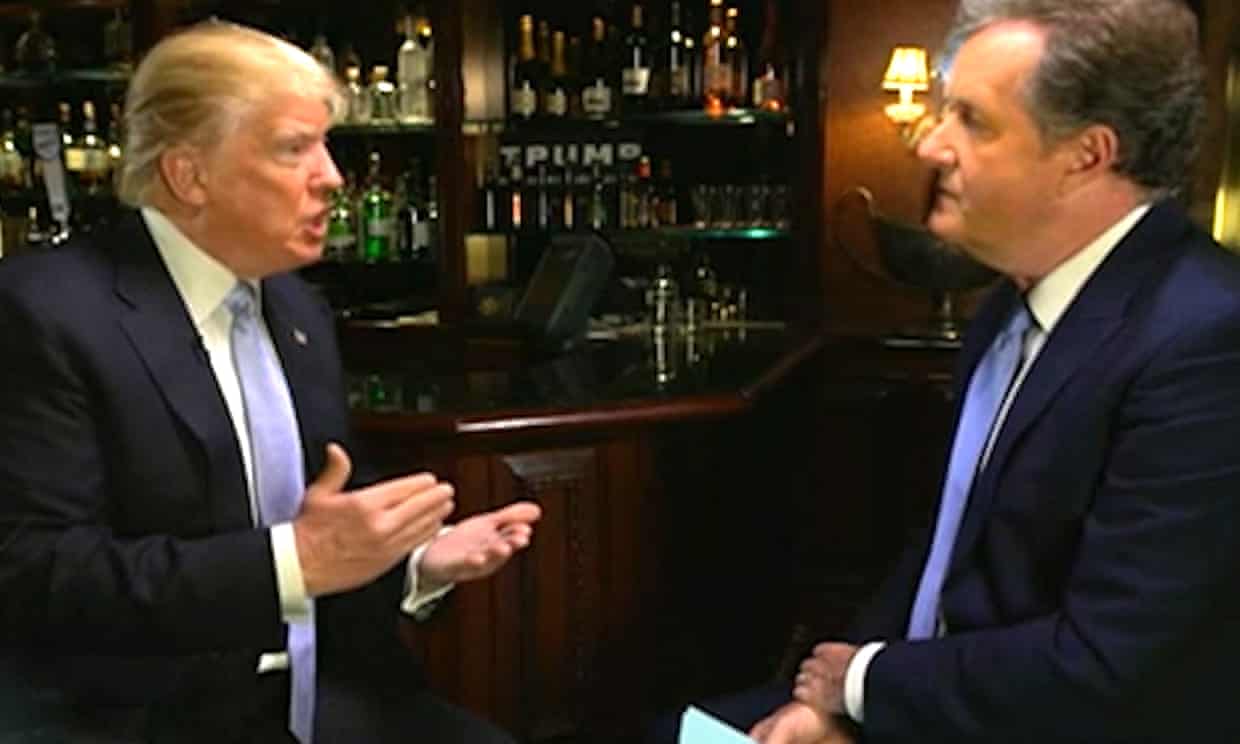 Trump sets out immigration plan in State of the Union address – as it happened. Read more...

Likewise, when Trump made a number of grossly ignorant and wrong comments about climate change in an interview with Piers Morgan last week, my first reaction was ‘it’s Donald Trump – of course he did.’

But that’s not okay. Donald Trump is the leader of the country most culpable for the existential threat that we’ve created by rapidly changing Earth’s climate. His administration is alone in the world in declaring that we need not worry about that existential threat. We need to hold him to account for his ignorance on this critically important issue and demand better.

Trump’s climate comments in the interview were so ridiculously misinformed that even late night comedians were able to debunk them:

They’re claims you might expect from a YouTube troll, not the leader of the country that produces some of the best climate science research and data in the world. It would be easy to laugh them off as Trump’s usual buffoonery, but he should be held to a presidential standard. So, to briefly debunk each of these myths: 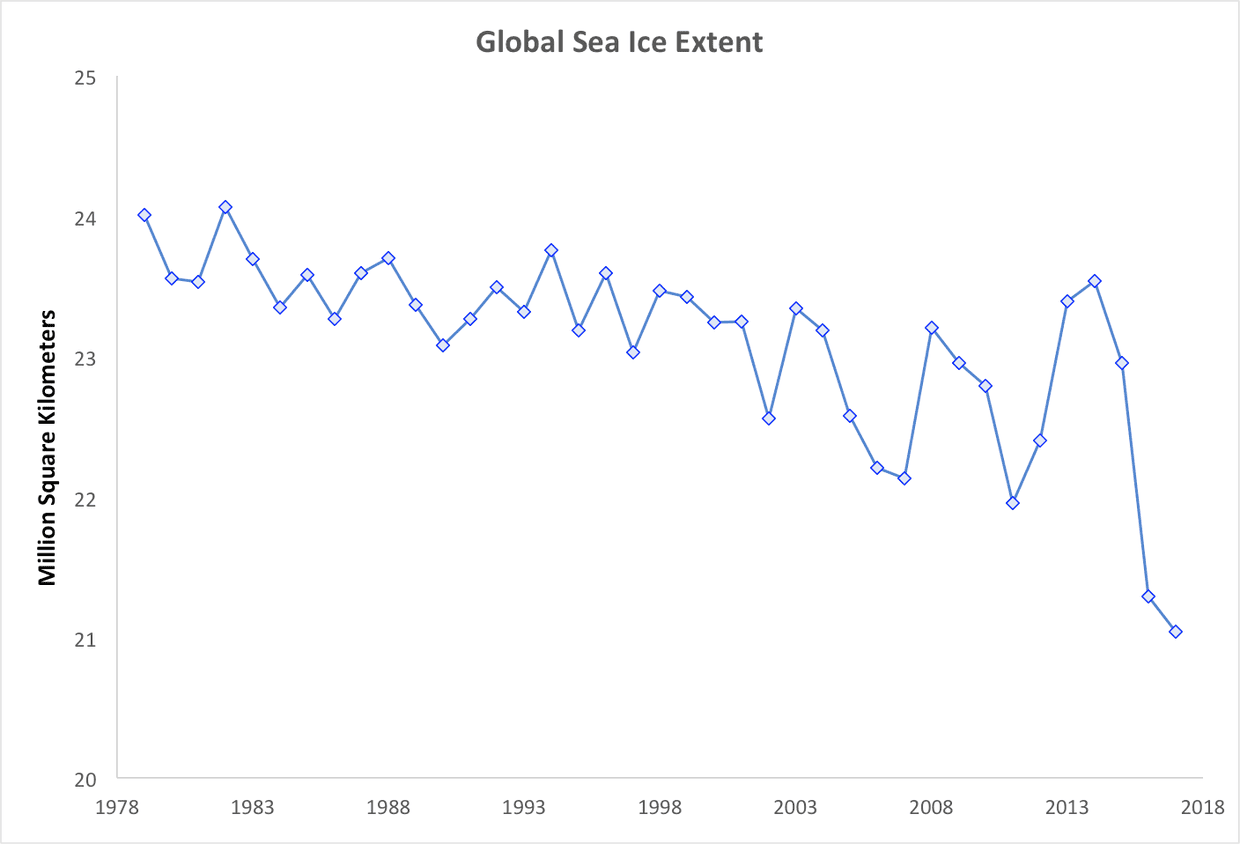 In his State of the Union speech this week, Trump didn’t even mention climate change. His only related comment was that “we have ended the war on beautiful clean coal.” It’s another completely nonsensical statement. There was arguably a ‘war on coal’ (which coal lost), but there’s near-universal support for ‘clean coal’ technologies (those which reduce and capture coal’s various pollutants, most notably carbon dioxide). Does Trump understand the difference? It’s Donald Trump – of course he doesn’t.

Trump’s misinformed comments in the Morgan interview extended beyond climate science into the realm of climate policy:

I believe in clean air. I believe in crystal-clear, beautiful … I believe in just having good cleanliness in all. Now, with that being said, if somebody said go back into the Paris accord, it would have to be a completely different deal because we had a horrible deal.

Trump may “believe in” clean air and water, but his EPA has taken countless steps to weaken regulations of air and water pollutants. Regardless of what he believes, his administration’s actions are creating dirtier air and water.

As for the Paris accord, it could not have been a better deal for America. In the agreement, the US committed to reduce its carbon pollution at approximately the same rate it was already declining. To meet that pledge would simply have required following through with existing American climate policies. Instead, Trump and his EPA administrator Scott Pruitt decided to take every possible step to undo those climate policies. Not only did they repeal the Clean Power Plan – America’s most robust effort to tackle climate change – but they even went so far as to erect posters at EPA buildings gloating about it: 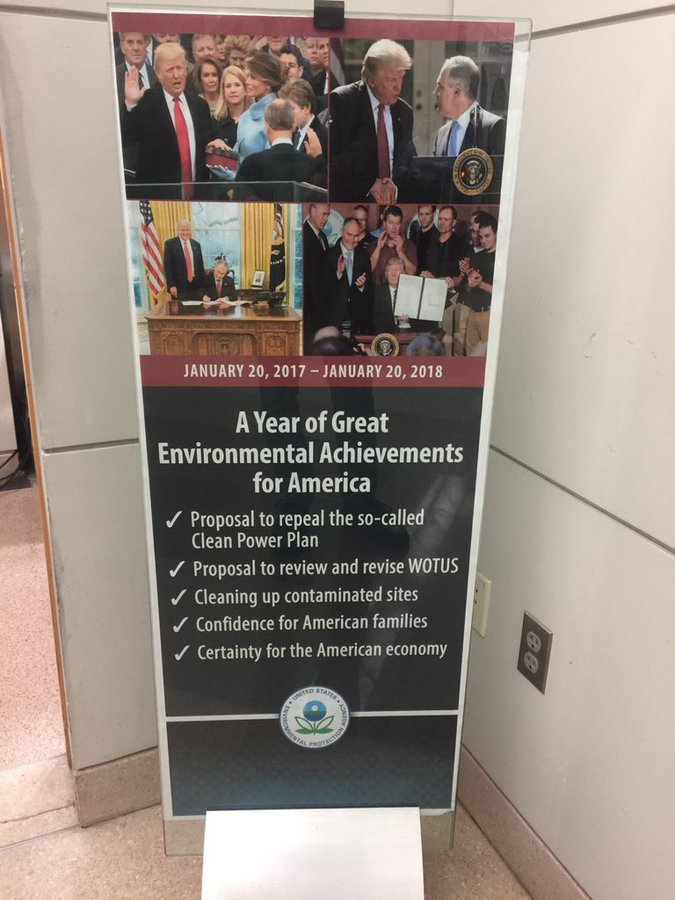 EPA has put these posters up at agency buildings. Celebrating regulatory rollbacks

However, even if Trump and Pruitt succeed in increasing American carbon pollution, there would have been no penalties for missing the Paris targets. The agreement was non-binding. In short, America could easily have met its pledges had the Trump administration so desired, but failing to do so carried no concrete consequences. How can a deal get any better than that?

The answer is that Paris was a great deal, but Trump campaigned on bluster that every deal entered by the Obama administration was the worst in world history (also see the Iran deal), and thus essentially forced himself to withdraw from those deals. Trump’s claims that he may re-enter the Paris agreement if America gets ‘a better deal’ are nonsensical.

This is not okay

While this is all behavior that we’ve come to expect from Donald Trump, that doesn’t make it okay. He may be America’s worst-ever president, but he’s still the leader of one of the world’s most powerful countries, with some of the world’s best scientific resources at his disposal. That his science advisor is effectively Fox News, as Andrew Freedman put it, is unacceptable and dangerous.

Americans clearly made a terrible mistake in electing him president (though 61% of voters did realize Trump is unqualified for the job), but it’s a mistake they won’t be able to remedy until 2020. Congress could act as a co-equal branch and pass climate legislation, but Americans put Republicans in charge of that institution as well, and with the exception of the party’s 34 Climate Solutions Caucus members, they’re also content to ignore the existential threat of climate change. However, Americans will have the opportunity to remedy that mistake this November.