IT’S TOO LATE TO SAVE THE GLACIERS, BUT SCIENTISTS ARE SAVING SOME PIECES IN AN ANTARCTIC VAULT... 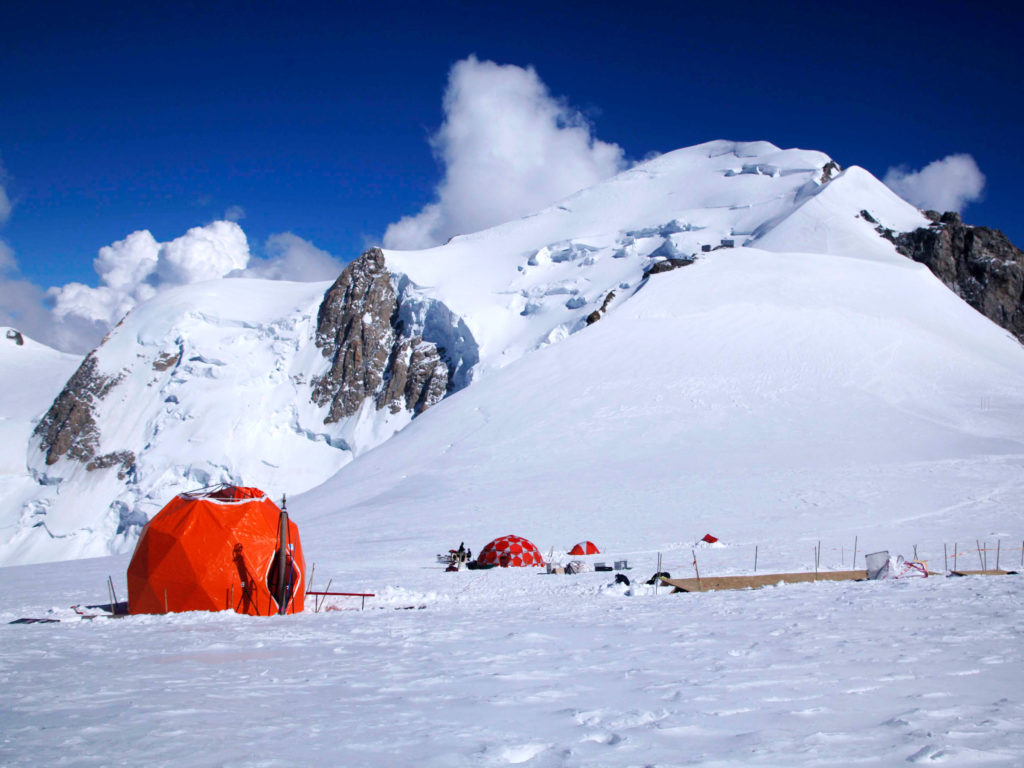 For the project, dubbed “Protecting Ice Memory,” researchers from France and Italy plan to create a repository of ice cores including the ones from Col du Dôme...

In mid-August, a group of Frenchmen, Italians, and Russians converged on a glacier near Mont Blanc, in the Alps. They weren’t skiers, or hikers, or a rogue band of yodelers. They were glaciologists, and they were there to collect columns of ice from the glacier, Col du Dôme. The team began by setting up camp: They erected a bright orange geodesic dome tent, assembled their ice drill, and dug a snow cave to stash their cores. Helicopters came bearing dehydrated food, water, shovels, sleeping bags, computers, sunscreen, and a few beers.

Glaciers all around the world are melting, mostly because of climate change. That’s tragic, but an abstract loss for most people—fewer square footage of pristine, frigid ice somewhere far away. But if you’re a paleoclimatologist, you’re alarmed for a different reason: Glaciers are data, and all that precious data is disappearing. So what’s a group of concerned European scientists to do? Fly the at-risk melty stuff to somewhere even colder, of course—like Antarctica.

For the project, dubbed “Protecting Ice Memory,” researchers from France and Italy plan to create a repository of ice cores including the ones from Col du Dôme. They’ll collect cylindrical cross-sections of glaciers from all around the world. Then they plan to bury the cores in a snow bunker 33 feet under Antarctica’s surface, where they’ll hopefully keep for posterity. And the scientists have just completed the first big step in that process, returning from Col du Dôme with three 410-foot-long cores of ice.

That first step was the product of lots of careful planning, especially to keep the cores cold and intact in transit. First, to extract a core, two Russian scientists operated the ice core drill, which essentially shoves a thin metal tube into the ice like a cookie cutter. Then they popped out the translucent core, measured it, cut it to one meter, and then placed it in a plastic bag. Six of those bags got packed in an insulated polystyrene box and stored in the snow cave.

Every time that cave filled up, the team summoned a helicopter waiting at their base camp in Chamonix, and then strapped bags laden with core boxes to it. The helicopter then ferried the boxes back down to Chamonix, where it was greeted by a refrigerated van ready to drive the cores two hours to the freezer warehouse at the Université Grenoble Alpes, where the cores are currently stored.

Simple enough, in theory. But it was hard, says Federico Dallo, a snow and ice chemist at the Ca’ Foscari University of Venice. When they drilled at night, they had to leave the tent open because if they closed it, the tent would run out of oxygen in the thin mountain air. (Choosing between asphyxiating or freezing? “It’s hard being a glaciologist,” Dallo says.) And even with a few days at Chamonix to get accustomed to the 14,000-foot elevation, the heights still got to the researchers, causing headaches and shortness of breath and making hefting boxes full of cores a challenge. “Everything was a bit uncomfortable,” says Dallo. 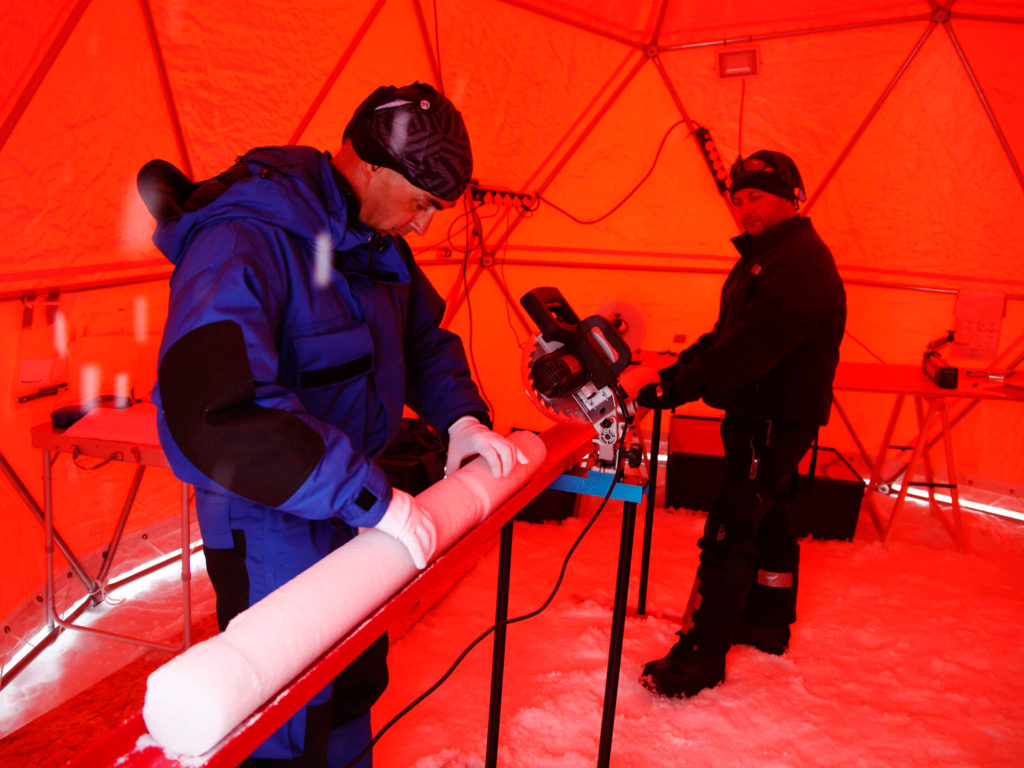 After the core is drilled, the scientists measure and cut the ice in one meter sections with a small chop saw. Sarah Del Ben/Wild Touch/Foundation UGA

Of the three cores the group collected, two of them are bound for Antarctica in 2020, after the scientists build that massive underground repository. The last one will stay in Europe, to be analyzed by climate scientists at Ca’ Foscari. Ice cores contain bubbles of air from centuries or millennia ago, so they’re useful for scientists trying to piece together what past environments looked like. Scientists can analyze the gases to determine carbon dioxide and methane levels, inspect pollen or pollutants caught in the ice, or find out how much snow fell in any given year. “Ice cores are one of the most important records we have of past climate conditions,” says Ed Brook, a paleoclimatologist at Oregon State University and the head of his own ice core lab.

That’s why this project is so important, Brook says. And those ice cores will only become more valuable in the future. Advances in analytical chemistry techniques means scientists can pick out more details from the ice, and they’ll think up new research questions. And researchers revisit old cores all the time for new insights—they’re an archive in the same way a library is. “The ice cores aren’t extremely important at this moment for research,” says Andrea Spolaor, a polar scientist at Ca’ Foscari. “They’re important to the future—just like reading an ancient book is today.”