IT WILL BE WARMER AT THE NORTH POLE NEXT WEEK THAN MUCH OF EUROPE, AS SEA ICE MELTS...

Polar bear standing upright on pack ice in the Arctic ocean on the North Pole. Image: Arterra/UIG via Getty Images

In what seems to be becoming an annual occurrence, temperatures at the North Pole are about to reach or possibly exceed the freezing point this week as the North Atlantic and the North Pacific Oceans inject unusually mild air into the Arctic...

Not coincidentally, Arctic sea ice is at record low levels, with a freak disappearance of ice off the western coast of Alaska, between Alaska and Russia. This vanishing of sea ice in the Bering Sea is exposing coastal communities in Alaska to storm surge flooding from typically fierce winter storms, particularly Little Diomede Island.

Videos from the island, which straddles the border with Russia show high waves slamming into the coastline, when normally there would be a sheet of ice protecting the island from high waves during the winter.

This is what record low sea ice in the Arctic means on the ground: stunning FB video taken Tuesday Feb 20 from Little Diomede, Alaska, smack in the middle of Bering Strait. Scary stuff, on many levels. #akwx #Arctic @Climatologist49 @ZLabe https://tinyurl.com/ybpgkbx4

It's as if someone opened the planet's refrigerator door, causing the cold air to drain out of the normally frigid region, bringing cold to the Western U.S. and Eurasia but leaving the air within the fridge itself unusually warm. In Europe, winds known as "The Beast from the East" will transport frigid temperatures from Russia and Scandinavia to the west, into Germany, France, and the UK, along with potential snowfall.

In part, this is because of a split in the polar vortex — that much hyped circulation of air at upper levels of the atmosphere that keeps the coldest air penned in across the Far North. One "sister vortex" has set up across Canada and the Western U.S., with another established in Eurasia. Many of these areas are colder than the Arctic is right now. 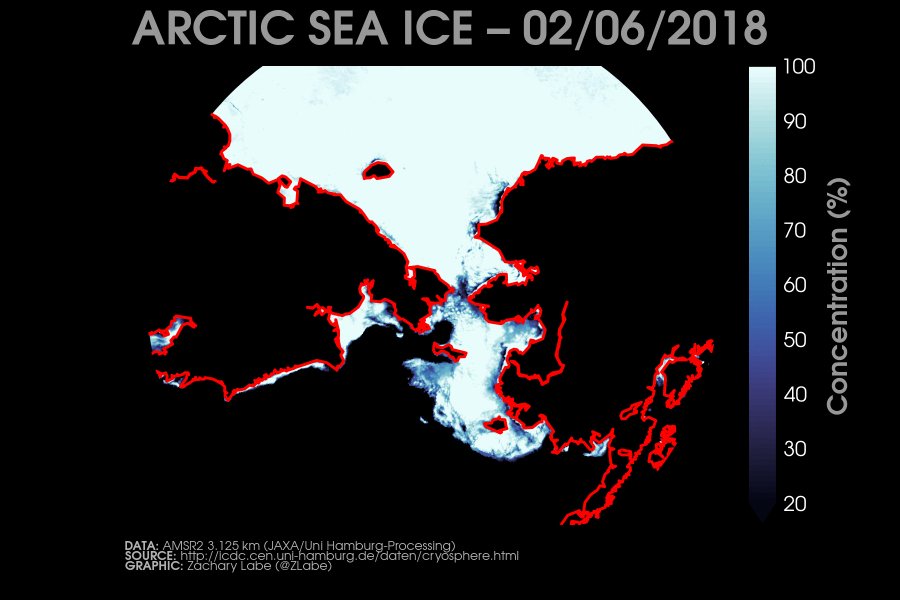 February? This is crazy. Retreat of sea ice in the Bering Sea continues - well below the previous record low in the satellite era.

Consider some of these startling statistics. Arctic sea ice is at its lowest observed level since the satellite era began in 1979. The magnitude and pace of the sea ice decline observed during the 21st century, along with the warming of the ocean surface throughout the region, has been shown to be unprecedented in the last 1,500 years.

In the Bering Sea in particular, sea ice has been at record low levels for much of the fall and winter. As if spooked by a ghost, much of the ice that had been covering the region vanished during February, a time when it would normally be at its peak extent and thickness.

Temperatures in parts of the Arctic — including the North Pole — could rise to 45 degrees Fahrenheit above average this week. Already, the northernmost land-based weather station in Greenland, known as Cape Morris Jesup, rose above the freezing mark of 32 degrees Fahrenheit, or 0 degrees Celsius, five times since Feb. 16. That weather station is just about 400 miles from the North Pole.

Previously, temperatures had only exceeded the freezing point at this weather station for brief periods during February in 2011 and 2017. So far this February, temperatures exceeded 32 degrees Fahrenheit on Feb. 16, 17, 18, 20 and 21, a warm streak that is incredibly rare.

At the same time as the Arctic heats up (relatively speaking), temperatures will plunge to about 35 degrees Fahrenheit below average across nearly all of Europe, from Moscow to London.

Typically, there is a high amount of variability to Arctic weather, even in the winter when there is 24 hours of darkness, since storm systems can transport different air masses into the region that alter temperatures significantly.

However, what has been happening this year is downright strange, although it's in keeping with what we'd expect to see as the Arctic warms at more than twice the rate of the rest of the world, in response to the rising amount of greenhouse gases in the atmosphere.

According to climate researcher Zack Labe, the temperature in an area closest to the North Pole is currently higher than at any other time during the month of February, dating back to 1958. On Friday, with more data in, Labe tweeted that the temperature spike seen in the region is extraordinary, well beyond unprecedented for this time of year. 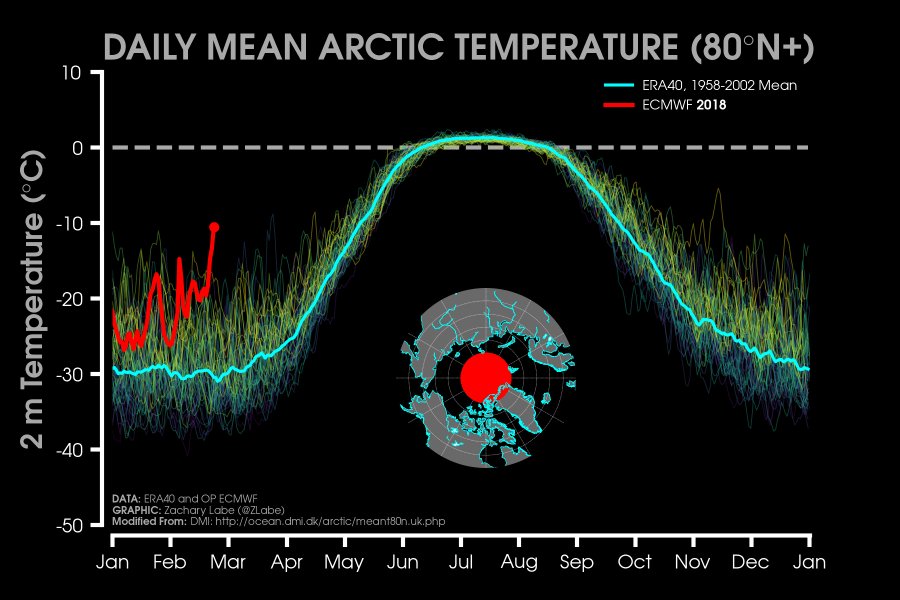 In fact, a study published in Nature about a 2015 sudden polar warming event found that these events are growing more intense, meaning that the temperature extremes are getting more extreme, especially when compared to the overall rate of Arctic warming.

Scientists studying the Arctic climate have sounded the loudest alarms about how quickly humans are altering the climate. This winter, coupled with some of the extreme warming events during the past few winter seasons, is driving that point home even further.