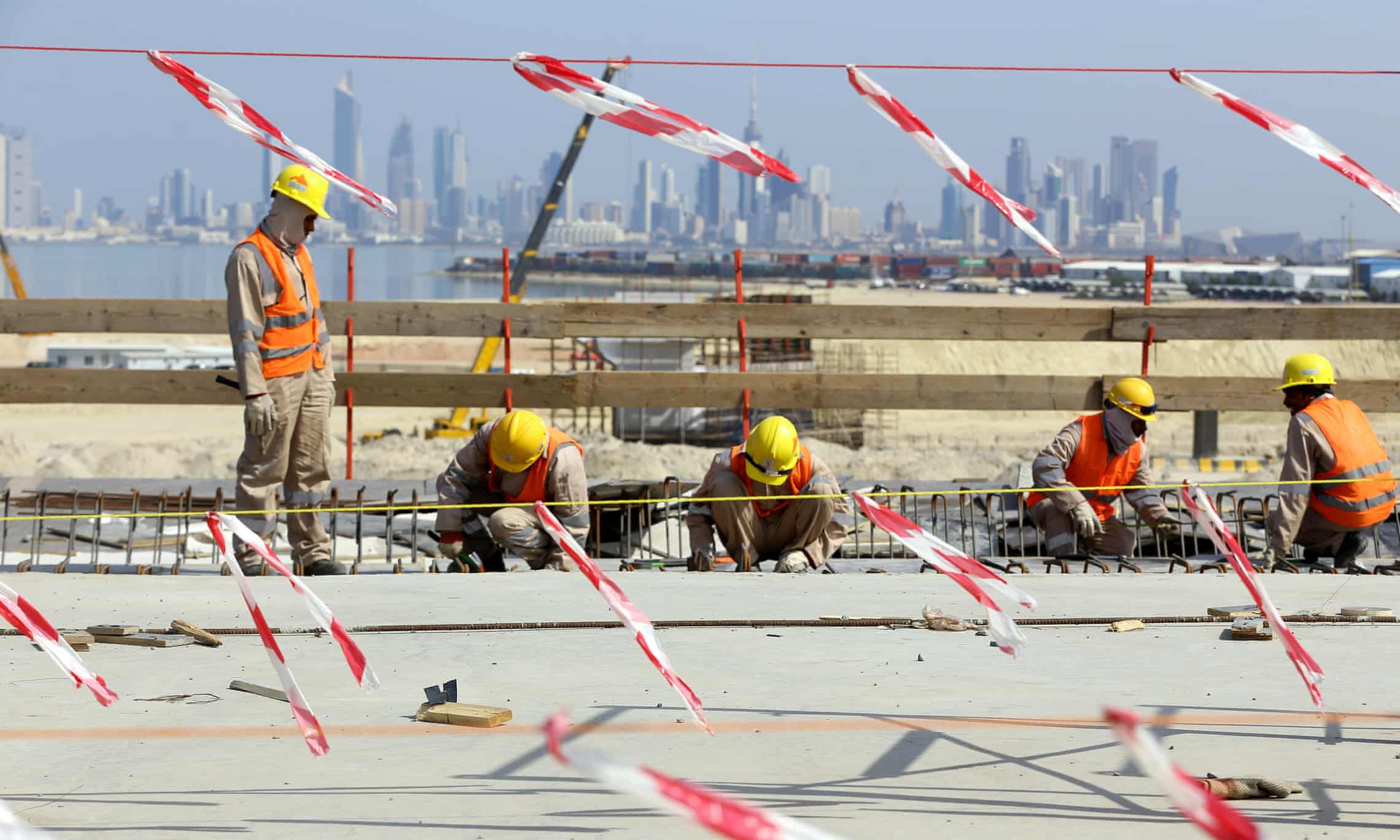 Malls and office complexes continue to spring up in Kuwait City, built by migrants often working illegally in soaring temperatures. But as oil and water reserves dwindle, the energy-guzzling citystate heads for an existential crisis...

t is 9am and the temperature in Kuwait City is 45C and rising, but already people working outside. A row of litter-pickers are already hard at work along a coastal highway, their entire bodies covered to protect them from the sun. Outside one of the city’s many malls, valets hover beside the air-conditioned entrance, while two men in white hats huddle wearily next to their ice cream stands.

Other city residents are luckier. They can avoid the outdoors altogether, escaping the inferno by sheltering in malls, cars and office buildings, where temperatures are kept polar-cold.

For years, Kuwait’s climate has been steadily heating up. In the summer months, the Gulf state now frequently touches 50C, and was last year awarded the grim prize of being the hottest place on earth, when temperatures reached a staggering high of 54C.

But while the capital is making plans to prepare for climate change and the rising heat, there are growing concerns for those residents who cannot afford to shelter inside, and mounting questions about how such an energy-intensive city can survive as resources such as water and oil dwindle.

Nearly 70% of Kuwait’s population is made up of migrant workers, many of whom power the near-constant construction of new office complexes and malls across the state. Though labour legislation now bans work outdoors between 12pm and 4pm, many are seen toiling through the hottest hours of the day regardless. 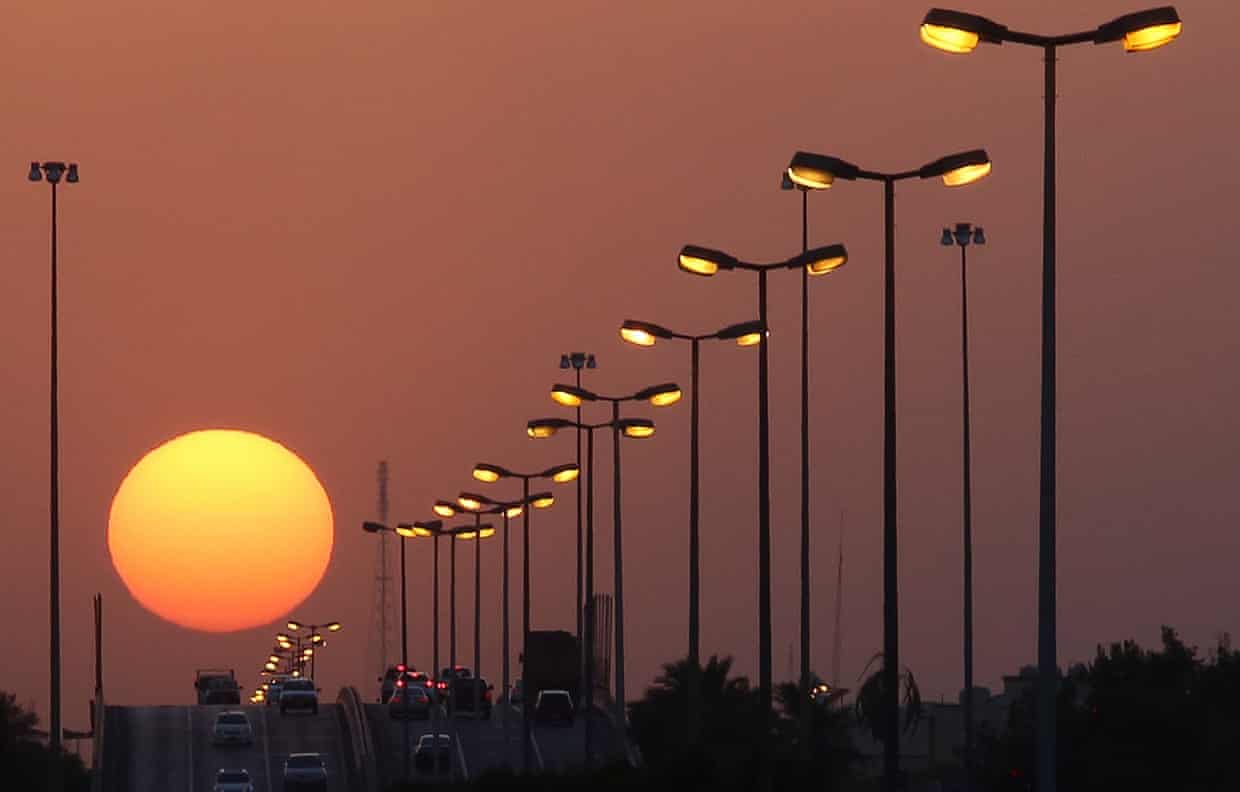 The sun sets over a highway in Kuwait City. Photograph: Yasser Al-Zayyat/AFP/Getty Images

During a recent visit, the Guardian witnessed tens of labourers on a building site close to Kuwait international airport working well past the 12pm deadline in 47C heat. Climbing on scaffolding amid the skeleton frame of a future shopping mall, some tried to take shelter in the shade available, as others swigged from bottle of water to cool down. The irony: they were installing air conditioning.

One company manager overseeing the site, who asked to remain anonymous, said: “Here in Kuwait or in the Gulf, you can see that most of the labourers are not citizens. They come from Egypt, India or Bangladesh.” Many of the toughest jobs on the site are subcontracted out, he explained, allowing companies to flout laws designed to shield workers from the heat.

If the labourers decline to work in these conditions, “they won’t get any money and will be forced to return to their home countries”, he said. He added that he had never witnessed a government inspection targeting working conditions, and that official were only concerned with workers’ residency visas.

The conditions for those men and women forced to work outside are set to worsen: between 2010 and 2035, Kuwait’s annual average temperature will increase by 1.6% to 28.7C , according to the country’s Environmental Public Authority (EPA), making for increasingly sweltering summer temperatures and more of the dust storms that already plague Kuwait City and beyond.

“Yes, we’re under pressure,” says Shareef al-Khayat, head of the climate change division at the EPA. “Not just from rising temperatures, but sea level rises – the demand for electricity and water will also be harder in the future.”

His colleague, Sameera al-Kandari, jokes: “But we’re prepared – we have air conditioning everywhere!” 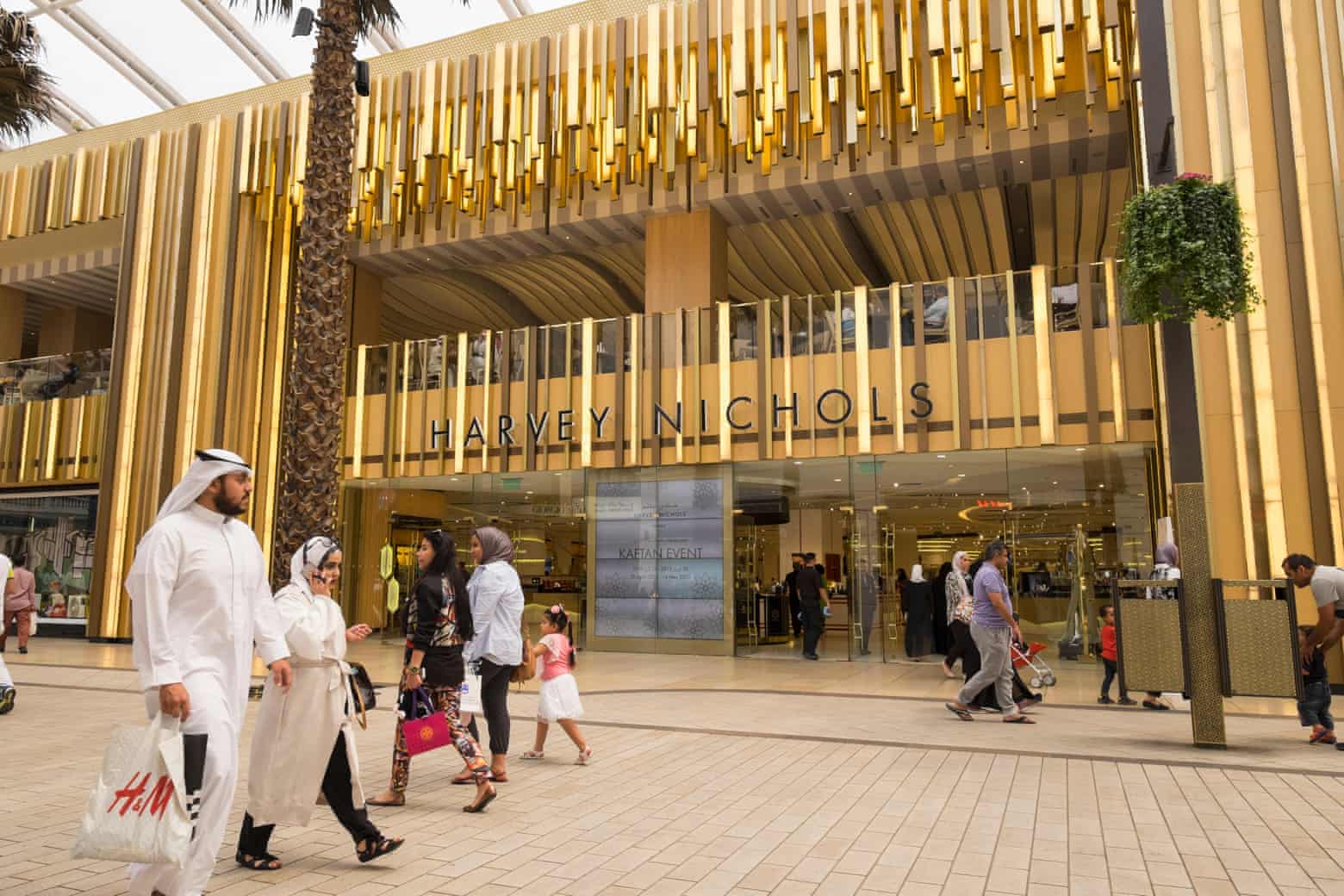 One of the problems at the heart of Kuwait City’s struggle against the effects of climate change is the central role that oil has played – and continues to play – in the construction of the urban landscape: the discovery of the precious resource in 1938 not only created a deeply felt symbol of national pride, and massive wealth, but reshaped the design of modern Kuwait City from the ground up.

The 1952 “Kuwait masterplan” drew ideas from British urban planners – such as Ebenezer Howard’s garden city movement – to completely remodel the city, demolishing the previous close-knit mud-brick buildings adapted to the local climate that made up the Old City, and replacing them with more western notions of what an urban environment should look like.

Kuwait City subsequently underwent a radical transformation, switching to a grid system where cars – powered by cheap petrol – were required to navigate the maze of highways for almost all everyday tasks.

“The planners who came [in the mid-20th century] planned according to the highways and then started filling in the blanks,” explains Dr Nasser B Abulhasan, head of AGi Architects, a firm trying to spur sustainable building in Kuwait. “Unfortunately in this region, the way they look at sustainability is limited.

In practice, Abdulhasan says, this means “using solar panels to feed air-conditioning machines on the roof of fully [glass] glazed buildings. But why do I have a fully glazed building, as I need to pump more energy to cool it?”

How will such an energy-intensive city cope as the abundance of resources such as oil and water dwindle? Dr Mohammed al-Rashid of the Kuwait Institute for Scientific Research predicts that by 2030, “30% of the oil produced here will be needed for electricity and water production”.

Around 99% of the country’s fresh water comes from desalination, itself an energy-intensive process currently heavily dependent on oil. Covered reservoirs, blue-and-white striped like candy, jut out of the dusty landscape along desert highways – essential in a region with the highest water consumption in the world. And yet here, water is heavily subsidised by the government: the average consumer pays just over £2 [0.8 Kuwaiti dinars] per 1,000 gallons, supplementing the real price of £25.50 [10 KWD]. 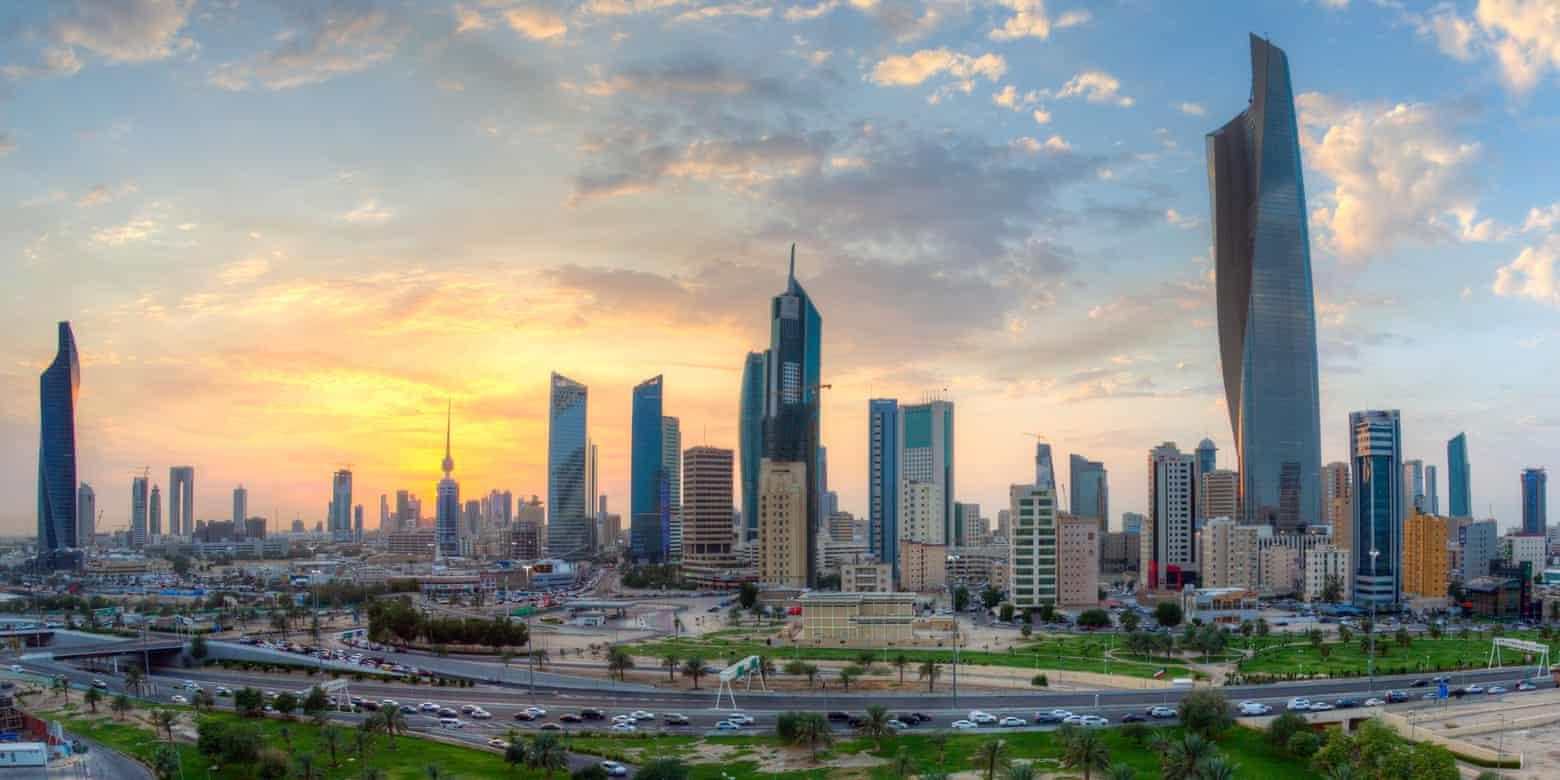 Though Kuwait has the second-largest reserve of water in the Gulf Cooperation Council – made up of the UAE, Bahrain, Saudi Arabia, Oman, Qatar and Kuwait – this is only enough for nine days’ worth of consumption, says al-Rashid, though it could last 50 days with conservation. Either way, it is clear that the city-state is heading towards an existential crisis in a world that needs to learn to live without oil.

One solution AGi proposes is a rethinking of the way buildings are designed, offering an alternative to the large, glass-clad structures reliant on continuous air conditioning. The firm’s creations are designed to use less energy from their inception, and are often inspired by traditional Persian windcatcher towers, clad in terracotta and with carefully-placed windows that face away from the sun. These draw in air from outdoors, channelling it across a pool of water at ground level to cool the entire building through a central courtyard. “Environmentally, but also socially, it goes back to what the traditional city was like,” says Aisha Alsager, managing director of AGi.

Al-Kandari of the EPA also explains that construction on an $4bn eco-friendly “smart city” for Kuwait will begin in 2019. “This means applying technology to make life easier,” he says. “The city will have buses, not cars, for transportation. There will be more places for walking, and sensors will monitor water consumption, helping us to reuse water. Air conditioning will be controlled by block, not by house.”

The project will be built by a consortium of South Korean construction companies, and is expected to accommodate 25,000 to 40,000 households.

Labourers on a building site, swaddled against the sun, take a nap during lunch. Photograph: Stephanie McGehee/Reuters

But not everyone is convinced. “They say they want to make a green city, but they haven’t made the basis of what makes a greener city clear,” says Dr Abulhasan of AGi. “The only thing defined so far is using solar panels and better quality glazing – they haven’t said shrink everything,” he added, emphasising that becoming accustomed to living in smaller spaces is a key part of the transition to a more sustainable environment.

“We need to change the way we live, and the way we move around the city,” adds Alsager. “Everywhere around the world is removing highways, and in Kuwait we’re increasing them tenfold.”

Adapting to rising temperatures will require a radical shift in thinking in Kuwait, especially concerning the most vulnerable. “We can’t manage the way these companies work,” says the construction manager, referring to the contractors who incentivise labourers to work outside in punishing conditions. “Of course, when I see labourers working after midday in this heat, it’s horrible. But what can we do? It’s their rules.”