LANDFILLS HAVE A HUGE GREENHOUSE GAS PROBLEM. HERE’S WHAT WE CAN DO ABOUT IT...

October 25, 2016 — We take out our trash and feel lighter and cleaner. But at the landfill, the food and yard waste that trash contains is decomposing and releasing methane, a greenhouse gas that’s 28 times more potent than carbon dioxide. Landfill gas also contributes to smog, worsening health problems like asthma.

Because methane typically has a much shorter life in the atmosphere than CO2 (12 years compared with 100 to 300 years for carbon dioxide), reducing methane release from landfills can help rapidly reduce climate change risk.

For 20 years, the U.S. Environmental Protection Agency has required some landfill operators (generally those with larger facilities) to control methane emissions by installing gas collection systems. To capture it, operators insert vertical wells into the waste and use vacuum pressure to suck up the gas.

Three-fourths of these projects in the United States burn methane to generate electricity, according to the EPA. The captured methane also can be piped to nearby industrial customers or compressed to make compressed natural gas or cooled to make liquefied natural gas to power vehicles, as Waste Management, one of the two primary landfill companies in the United States, did for some of its garbage trucks in California. Or it can be cleaned to a higher standard and put into a natural gas pipeline, joining the larger gas supply, a method Waste Management has employed at its Milam Landfill in Fairmont City, Illinois. In some cases, it’s not put to beneficial use but is burned off to convert the potent methane to less intense global warming emissions.

In July, EPA published new rules tightening regulations related to methane emissions from landfills. The agency claims the move will reduce methane emissions by 8.2 million metric tons (9 million tons) of CO2 equivalent a year beginning in 2025, approximately equal to taking 1.7 million cars off the road for one year.

But according to Peter Anderson, a waste management consultant who has advised the EPA on landfills’ greenhouse gas emissions, gas capture facilities are not particularly effective because of the nature of methane and landfill operations. Methane-producing bacteria flourish when there is no oxygen, a condition called anaerobic. Landfills go through various stages: open, open with a cover that still lets in some oxygen, and closed with an impermeable seal.

The EPA estimates that landfill gas energy projects capture roughly 60 to 90 percent of the methane emitted from the landfill, depending on system design and effectiveness. But people who study waste, such as Anderson and Hans Oonk, a Dutch consultant on environmental policies and technologies, say the EPA’s estimate is likely an overstatement. A 2012 paper by Oonk evaluated the efficiency of landfill gas capture projects; it reported that gas collection efficiency depends on the phase of the landfill and varies widely — with efficiencies ranging from 10 to 90 percent.

A more direct — and likely more successful — way to reduce landfill methane would be to reduce the amount of methane-generating materials going into landfills in the first place.

With some 40 percent of all food wasted in the United States, reducing food waste offers big opportunities. Last year the EPA and U.S. Department of Agriculture set a target to reduce food waste by 50 percent by 2030, with programs for public education and commercial policies. “Let’s feed people, not landfills,” said EPA administrator Gina McCarthy in announcing the initiative. “By reducing wasted food in landfills, we cut harmful methane emissions that fuel climate change, conserve our natural resources, and protect our planet for future generations.” 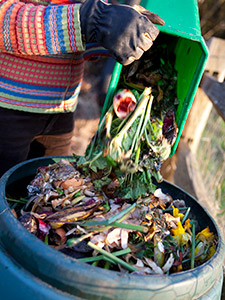 Composting can help reduce the landfill methane problem by keeping some organic material out of the trash. Photo © iStockphoto.com/cjp

After reducing food waste, the next best step is turning what remains, along with yard waste, into compost rather than sending it to landfills, says Neil Seldman, cofounder of the Institute for Local Self-Reliance, a nonprofit that helps communities fight landfills and waste incinerators and institute composting, recycling and zero-waste programs.

“The organic matter is invaluable; there’s no other way to replace topsoil and many other agricultural amendments,” Seldman says. “Topsoil levels in the U.S. are dangerously low due to erosion and very little is being replaced.”

More and more cities, such as San Francisco and Seattle, are moving in this direction. According to Seldman, some 250 U.S. cities have instituted curbside collection of yard and food waste. Other cities are putting in policies to encourage backyard composting, he says.

In places with such goals, Waste Management operates composting facilities as well as landfills, says Kelly. While composting can emit methane too, specific practices can be used to minimize production. “If you are running your composting facility well, you shouldn’t have a lot of methane emissions,” says Kelly.

Food and yard waste can also be sent to a centralized anaerobic digestion facility, which essentially “processes food scraps like a giant stomach,” according to the Waste Management website. Because it’s a sealed system, it’s easier to capture methane for energy generation than at landfills. While these facilities can stand alone, they are increasingly being incorporated into wastewater plants that treat sewage. Waste Management has set up pilot projects for this technology in Los Angeles and New York and will soon take it to Boston too.

Milwaukee and Philadelphia are taking the same principle to the people, encouraging them to install garbage disposal units in their kitchen plumbing, said Seldman. In these municipal systems, the shredded food, along with sewage, flows to methane digesters that recover methane for energy generation.

“It’s important to get more of this stuff out of the landfill,” says Anderson.