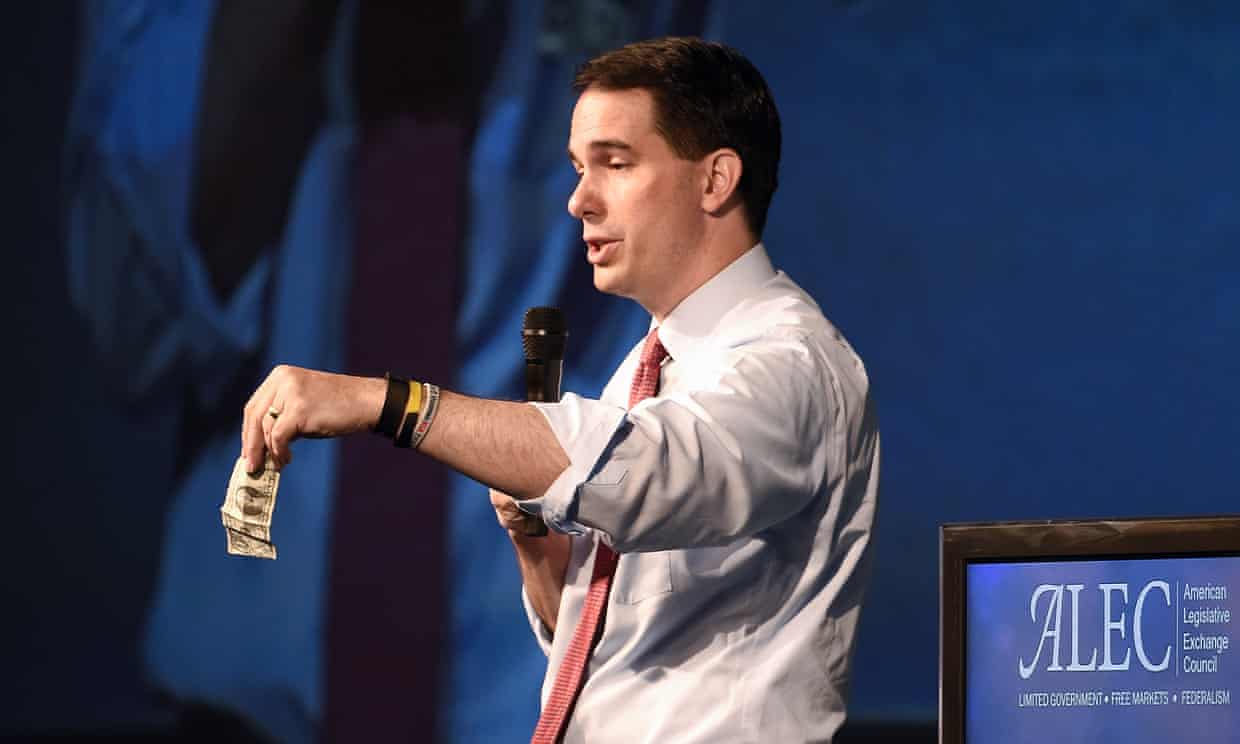 In a case that is the subject of a petition currently in front of the US supreme court, five Wisconsin prosecutors carried out a deep investigation into what they suspected were criminal campaign-finance violations by the campaign committee of Scott Walker, Wisconsin governor and former Republican presidential candidate. Known as the “John Doe investigation”, the inquiry has been a lightning rod for bitter disputes between conservatives and progressives for years.

In July 2015 the state’s supreme court halted the investigation, saying the prosecutors had misunderstood campaign finance law and as a result had picked on people and groups “wholly innocent of any wrongdoing”. Highly unusually, the court also ordered that all the evidence assembled by the prosecutors be destroyed and later held under seal.

Among the documents are several court filings from the case, as well as hundreds of pages of email exchanges obtained by the prosecutors under subpoena. The emails involve conversations concerning Walker, his top aides, conservative lobbyists, and leading Republican figures such as Karl Rove and the chair of the Republican National Committee, Reince Priebus.

Trump also appears in the files, making a donation of $15,000 following a personal visit from Walker to the Republican nominee’s Fifth Avenue headquarters.

In addition to Trump, many of the most powerful and wealthy rightwing figures in the nation crop up in the files: from Home Depot co-founder Ken Langone, hedge-fund manager Paul Singer and Las Vegas casino giant Sheldon Adelson, to magnate Carl Icahn. “I got $1m from John Menard today,” Walker says in one email, referring to the billionaire owner of the home improvement chain Menards.

Among the new material contained in the documents are donations amounting to $750,000 to a third-party group closely aligned to Walker from the owner of NL Industries, a company that historically produced lead paint. Within the same timeframe as the donations, the Republican-controlled legislature passed new laws making it much more difficult for victims of lead paint poisoning to sue NL Industries and other former lead paint manufacturers (the laws were later overturned in the federal courts).

The John Doe files also provide new insight into the extensive efforts made by allies of Scott Walker to help a conservative member of the Wisconsin supreme court, David Prosser, hang onto his seat in a 2011 re-election. A network of like-minded groups and campaigners channeled $3.5m in undisclosed corporate funds to pay for TV and radio ads backing the judge.

The push was seen as vital, the documents disclose, as a means of retaining the rightwing majority of the court and thereby preserving the anti-union measures introduced by Walker. “If we lose [Justice Prosser], the Walker agenda is toast,” one ally writes in an email sent around to the governor’s chief of staff and several conservative lobbyists.

In 2015, Justice Prosser refused to recuse himself from a case in which the state supreme court sat in judgment over the John Doe investigation, despite the fact that the investigation focused on precisely the same network of lobbying groups and donors that had helped him hang onto his seat. The judge joined a majority of four conservative justices who voted to terminate the investigation and destroy all the documents now leaked to the Guardian.

Prosser told the Guardian that four years had passed since his re-election before he joined the decision to close the John Doe investigation, over which time any potential conflict of interest had faded.

The John Doe investigation was launched in 2012 after a set of recall elections that were forced on Walker and six Republican state senators in the wake of their hyper-partisan anti-union measure, Act 10. The prosecutors alleged that the governor’s campaign committee had operated a coordinated network involving outside lobby groups through which unlimited amounts of corporate money could be channeled without public disclosure.

Walker and the other parties who were the subjects of the John Doe investigation have all protested that they were unfairly accused of legal violations. They point out that no charges have been brought in the case, and that a succession of Wisconsin courts, including the state’s highest, have cleared them of wrongdoing.

Walker’s campaign told the Guardian that the John Doe investigation was “baseless” and had been shut down multiple times by the state courts. “There is absolutely no evidence of any wrongdoing,” a spokesman said.

The third-party lobbying groups that were the subject of the investigation said the prosecutors had accused wholly innocent individuals of crimes that did not exist under state law. They insisted they had a right to comment about public officials and policy and to protect the confidentiality of their donors.

The pervasive influence of corporate cash in the democratic process, and the extraordinary lengths to which politicians, lobbyists and even judges go to solicit money, are laid bare in sealed court documents leaked to the Guardian.

The John Doe files amount to 1,500 pages of largely unseen material gathered in evidence by prosecutors investigating alleged irregularities in political fundraising. Last year the Wisconsin supreme court ordered that all the documents should be destroyed, though a set survived that has now been obtained by the news organisation.

The files open a window on a world that is very rarely glimpsed by the public, in which millions of dollars are secretly donated by major corporations and super-wealthy individuals to third-party groups in an attempt to sway elections. They speak to a visceral theme of the 2016 presidential cycle: the distortion of American democracy by big business that has been slammed by both Donald Trump and Bernie Sanders.

Support the Guardian’s fearless, independent journalism by making a contribution or becoming a member