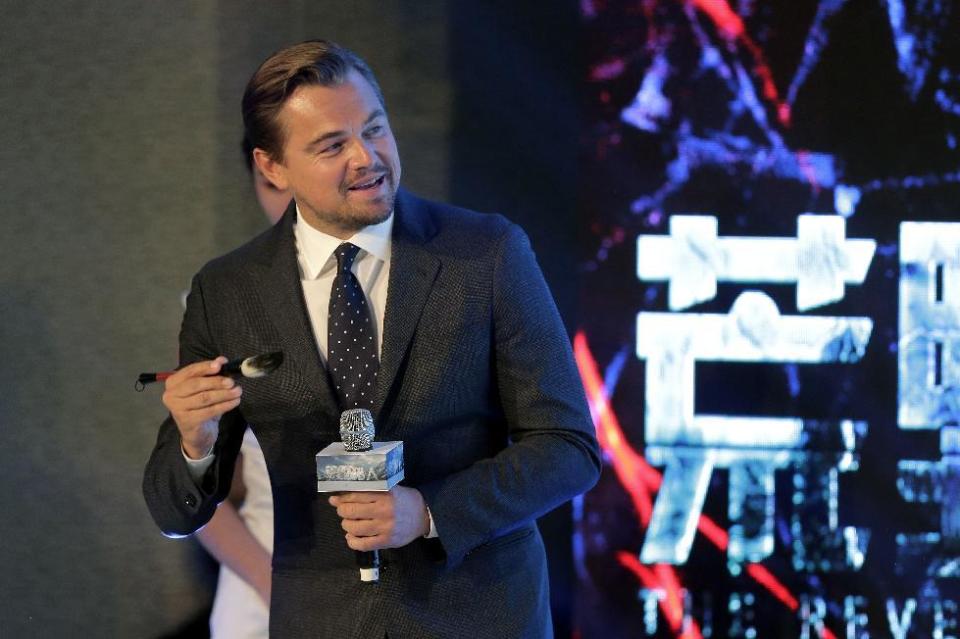 Actor Leonardo DiCaprio holds a Chinese writing brush as he prepares to write his name on stage during a news conference of the movie “The Revenant” at a hotel in Beijing, Sunday, March 20, 2016. DiCaprio on Sunday praised China’s work to combat climate change on a trip to Beijing to promote his movie “The Revenant.” (AP Photo/Andy Wong) VIEW GALLERY

BEIJING (AP) — Leonardo DiCaprio praised China's work to combat climate change on a trip to Beijing on Sunday, and said he believes the world's largest emitter of greenhouse gases could be "the hero of the environmental movement."

The actor and environmentalist, who called for action to combat climate change during his Oscar acceptance speech last month, praised China's shift toward renewable forms of energy to lower carbon emissions.

"As we all know, the United States and China are the two biggest contributors, and I think that China has made radical movements forward as far as alternative energy and ways to be sustainable," he said at a news conference.

DiCaprio was in Beijing to promote "The Revenant," which won him his first Oscar, for best actor, at this year's ceremony. The movie was released in mainland China on Friday and has already earned 100 million yuan ($15 million) at the Chinese box office, according to an announcement at Sunday's news conference.

DiCaprio, who has made several trips to China in the past, is one of China's most popular Hollywood actors, mainly because of his performance in "Titanic," one of his few films that have been shown in mainland Chinese cinemas. He is affectionately called Xiao Li, or Little Lee, by Chinese.

China is the world's largest coal user and producer, but has also become a leading investor in renewable forms of energy, such as solar and wind power.

To see our most current positions, opinions, comments, agreement or disagreement with this article, and/or possible criticisms related to the subjects or facts raised in the above article, click here.
Then look for those subjects in the navigation links at the top the page.
To learn about more about global warming, climate change or greenhouse gases as well as the causes, consequences, solutions, definitions, facts and tipping points related to these subjects, click here.
To automatically be emailed a summary of the latest news on global warming, sign up for our Global Warming Blog by clicking here. (Put your email address in the Global Warming Blog Subscribe box at the bottom right of the page.)
To sign a critical petition for declaring a national and international global warming State of Emergency, click  here!