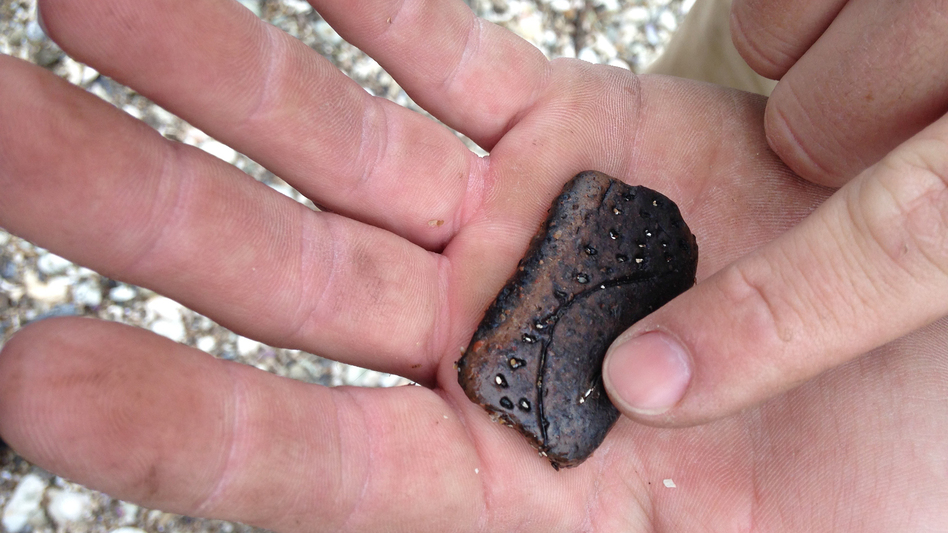 Richie Blink, born and raised in Plaquemines Parish, La., south of New Orleans, works for the National Wildlife Federation. He got in touch with an archaeologist to take a look at some shards of pottery that were eroding into the Gulf of Mexico. Blink holds a pottery shard that could be 300 to 500 years old, from the Plaquemine culture of what's called the Bayou Petre phase. (WWNO)

Louisiana is losing its coast at a rapid rate because of rising sea levels, development and sinking marshland. Officials are trying to rebuild those marshes and the wetlands, but much of the coast can't be saved. This makes Louisiana's history an unwitting victim. As land disappears and the water creeps inland, ancient archaeology sites are washing away, too...

Richie Blink was born and raised in Plaquemines Parish, La. — way down south of New Orleans along the Mississippi River. Now he works for the National Wildlife Federation. 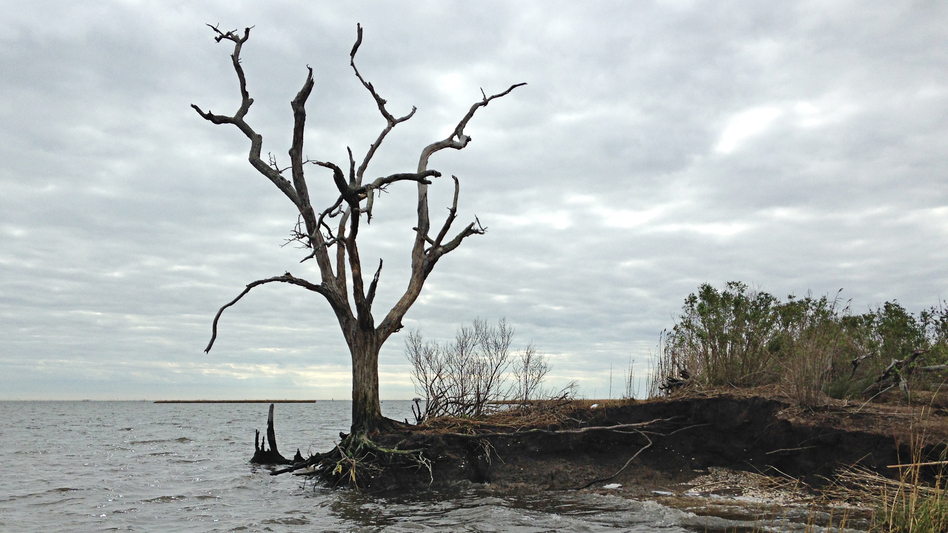 Louisiana is losing its coast faster than any other place in the world. As land disappears and the water creeps inland, ancient archaeology sites are washing away. The roots of a dead oak tree at the edge of an ancient Native American mound are all that hold the land together. (WWNO)

When he was a kid, his dad showed him a special place in Adams Bay, where they'd go fishing.

"We would come out of the floodgates and my dad would say 'Head for the Lemon Trees!'" Blink says.

What's locally known as the "Lemon Trees" is a stand of weathered old trees on a grassy tuft of land. It's a well-known landmark for fishermen, but Blink says they would rarely stop there to hunt or fish because it's a sacred Native American site.

"The legend goes that you were always to bring some kind of sacrifice, so somebody left some lemons for the ancestors," Blink says.

And those grew into big trees with grapefruit-sized lemons. But as land was lost to the Gulf of Mexico, saltwater made its way into the freshwater marsh, killing off the trees and other plants.

The trees stand like skeletons on the edge of this scrappy, wind-beaten island. Waves beat against the dirt, washing it away, exposing shards of ancient pottery.

"You can see, it's just everywhere ... there's just shards of it all over the place," Blink says. "This is earthen pottery made by natives. This site is in the process of being destroyed. It only has a few more years left."

This ancient Native American site is an important archaeological find. It's one of many historic sites being forever lost to the Gulf as rising seas and saltwater intrusion eat away at Louisiana's fragile marshes. Two sites like this are lost each year.

When Blink saw how fast the land was eroding he decided to find an archaeologist and ask for help. That led him to Brian Ostahowski.

Ostahowski says he gets a lot of calls like this, at least once a month. People who say: " 'I have a great archaeological site in my backyard,' " Ostahowski says. "And chances are they usually do."

So he hopped in a boat with Blink and went out to the "Lemon Trees."

Based on the pottery and soil, Ostahowski says native people lived at the site 300 to 500 years ago. The pieces of broken pottery are probably from an ancient trash pile, called a midden. There could even be human remains there.

"You're talking about a whole ceremonial center that could tell you about lifeways, or the change of lifeways, that's going to be completely gone within 10 years," he says. "It maybe took 300 years of occupation there."

Three hundred years to build it — and in just 10 years it could be erased.

Ostahowski took samples of the soil for radiocarbon dating. Unlike the usual slow-paced archaeology dig, Ostahowski wants to excavate the mound as soon as possible and study the pottery shards and oyster shells.

But the truth is, there just isn't much time.

"We're talking about different ways that we can come up with kind of an emergency action, or emergency excavations," Ostahowski says.

He wants to learn more, like how long people lived there and how many different occupations there might have been.

These details could help fill gaps in our understanding of the prehistoric Plaquemine culture, which includes tribes that lived on the lower Mississippi before Europeans came.

For Blink, it's more than ancient history at stake. It's personal history, where he grew up.

He honors that in his own way, like two weeks ago when he brought out some lemons.

Under a windswept tree, on top of the small mound, a handful of dried up lemons sits in the shade.

By Tegan Wendland
NPR
source: http://www.wbur.org/news
original story HERE
If you would like to share this blog story on Facebook with one easy click, scroll down to the very bottom of this page and look for the SHARE button along with the Facebook LIKE button under the "Sign up to Learn About & Help End Global Warming" area where people enter their email address. You do not need to enter any email address to use the one click SHARE button.
Get more of The Global Warming Blog. Bookmark this page and signup for the blog’s free RSS Feed. Sign up for free Global Warming Blog by clicking here. You will automatically be emailed a regular summary of the latest global warming headlines.
To learn about more about global warming, climate change or greenhouse gases as well as the causes, consequences, solutions, definitions, facts and tipping points related to these subjects, click here.
To see our most current positions, opinions, comments, agreement or disagreement with this article, and/or possible criticisms related to the subjects or facts raised in the above article, click here.  Then look for those subjects in the navigation links at the top the page.
To sign a critical petition for declaring an international global warming State of Emergency, click  here!