MAINE’S COASTAL WATERS ARE UNHEALTHY FROM CARBON, ACIDITY. ARE SEAWEED GARDENS THE ANSWER? 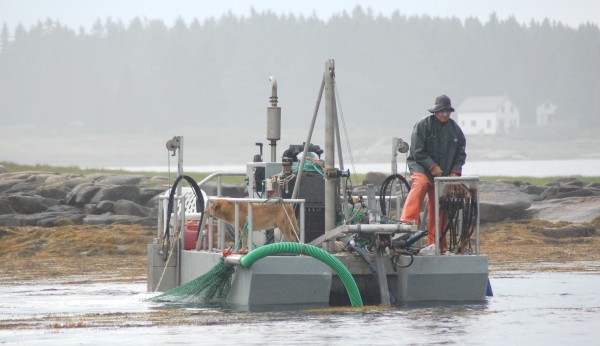 BOOTHBAY, Maine — Seaweed cultivation has been promoted in recent years in Maine as a way to produce local nutritious food and to boost the coastal economy...

Now, seaweed harvesters say their industry provides yet another benefit: environmental protection, in the form of improving water quality.

A new study from Bigelow Laboratory for Marine Sciences in Boothbay indicates growing and harvesting seaweed may be an antidote for increasing carbon and acidity levels in the ocean, which is harming a variety of marine life.

Since January 2016, the lab has been studying the effect of kelp growth on surrounding carbon levels at the Ocean Approved seaweed farm off Great Chebeague Island in Casco Bay.

The early results indicate that sugar kelp absorbs carbon from the surrounding water as it grows. This is prompting the lab to expand its research on kelp and to conduct a separate study on the carbon-absorption abilities of wild-grown rockweed.

“Our research indicates that sugar kelp absorbs incredible amounts of carbon as it grows, creating a ‘halo’ of higher water quality around it,” said Nichole Price, a senior research scientist at the lab and the director of the lab’s Center for Seafood Security.

According to Price, in the six months that scientists measured carbon dioxide levels in and around the 3-acre kelp farm, they found the kelp was absorbing carbon at the same rate carbon levels are expected to increase in the Gulf of Maine over the next 100 years from global use of fossil fuels.

The initial findings are significant because increasing carbon levels are making the ocean more acidic. Higher carbon levels in the marine environment are linked to temperature-related die-offs of coral reefs, shift in species distribution as fish seek out colder waters richer in oxygen, and the spread of shell disease among lobster, primarily off the southern New England coast.

Acidification resulting from higher carbon levels also poses a threat to bivalve shellfish species such as oysters, mussels, scallops and clams, all of which are commercially grown and harvested in Maine waters.

In 2015, the most recent year statistics are available for Maine, commercially harvested oysters, clams, mussels, scallops, etc., accounted for more than $36 million in revenue, of which more than $22 million came from softshell clams alone, according to Maine Department of Marine Resources. The $36 million total represents nearly a $15 million increase since 2010, when the total statewide landings value of those same marine bivalve species was $21.7 million.

“The importance [that harvesting seaweed will have] to the shellfish industry will only increase,” Price said.

Seaweed cultivation in Maine has been paired with fish and shellfish aquaculture for years, according to people familiar with the industry.

Shep Erhart of Maine Coast Sea Vegetables, who serves as president of the Maine Seaweed Council, said seaweed has aided salmon and other finfish aquaculture because it absorbs the high level of nitrogen within the excrement released by the schools.

Ocean nitrogen also tends to be high in areas where agricultural runoff drains into the sea, according to Price, which led shellfish growers to use seaweed in their operations, too. But in Maine, where the impact of agriculture on coastal waters is relatively low compared to other states, the seaweed appeared to have less impact on nitrogen levels and more of a general positive impact on the health of the shellfish being cultivated, she said.

“We don’t have the type of agriculture runoff problems that the mid-Atlantic [shoreline] does,” Price said. But the Gulf of Maine’s does have comparatively lower temperatures, she added, which makes it more susceptible to carbon absorption.

Erhart said Bigelow Lab’s research is the first scientific evidence of which he’s aware that demonstrates seaweed cultivation and harvests can reduce carbon levels. Large-scale harvesting of seaweed then, like clear-cutting forests on land, likely would have an overall negative impact, he added.

“The seaweed is actually giving something back” to the balance of the coastal marine environment, Erhart said. “Taking some of it on a regular basis in moderation can help with the larger issue of ocean acidification.”

According to Price, the lab’s key finding is that the carbon-absorption of kelp corresponds to its stages of growth. Sugar kelp has a life cycle of only about two years, and it grows the most in the spring. It is during this heavy growth period that kelp absorbs carbon, which it later releases into the water as it ages and dies, she said.

This is why harvesting the kelp is deemed important. Removing mature kelp and ‘planting’ new stalks — cultivated in land-based nurseries before being transferred to lease sites — ensures that carbon captured by the growing kelp is not released later, according to Price.

Bigelow Lab now plans this year to measure carbon levels in the ocean around its lease site by using a boat outfitted with carbon sensors to take readings in concentric circles around the site off Great Chebeague, which will help scientists determine how the rate of carbon absorption changes with distance from the kelp beds.

The lab also plans to use money from the Department of Marine Resources’ seaweed management fund, which is funded by harvester license fees, to research carbon absorption rates for rockweed. If the studies are promising, she said, the lab hopes to raise money for field research on rockweed in 2018.

Hale Miller, a lobsterman who fishes out of Tenants Harbor, also has been harvesting rockweed for the past year or so. He typically cuts several thousand wet pounds of the seaweed species per day, four or five days per week, often along the Muscle Ridge Islands in Penobscot Bay. He does it during the winter, when he hauls his lobster traps out of the water and waits for the crustaceans to return back toward shore in the spring.

Miller said part of his interest in harvesting rockweed, aside from the extra money, is the ecological benefit along the shoreline. The shallow water near the coast serves as a nursery for a variety of commercially harvested marine species, he said, and reducing water carbon levels there would help a variety of different creatures.

“It’s affecting lobsters, it’s affecting scallops, it affects groundfish,” Miller said of ocean acidification. “[Seaweed harvesting] will help across the board — oyster aquaculture, the estuaries, everything.”

Miller added that rules for harvesting wild rockweed are aimed at sustainability. The state requires harvesters leave at least 16 inches of the plant attached to the bottom when they cut the stalk, he said, which often results in the plants growing back more densely.

“We’re leaving a significant amount of product on the bottom,” Miller said. “It’s kind of like ‘v’-notching [egg-bearing lobsters and throwing them back overboard]. It think it’s a good thing.”