MANY OF WORLD’S LAKES ARE VANISHING AND SOME MAY BE GONE FOREVER... 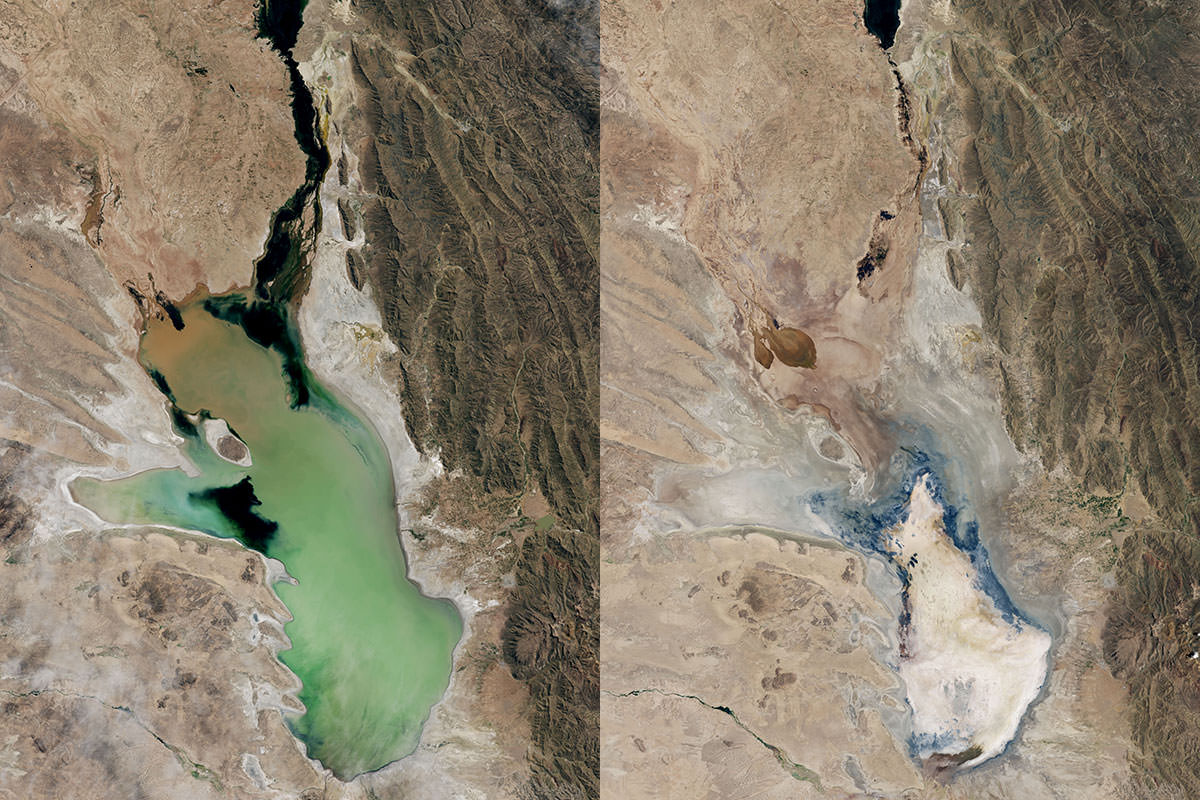 Recent research and new data suggest that lakes in other parts of the world may also be on their way out.

The combination of silting up and irrigation withdrawal from the Desaguadero River, which feeds Poopó, together with climate change and the extra warmth from current El Niño, were enough to finish this lake off.

“Considering the size of the lake – 2700 square kilometres – this is quite an astounding event, with slim prospects of recovery,” says Dirk Hoffmann from the Bolivia Mountain Institute. “This event should serve as a real warning. Eventually, we can expect Lake Titicaca to go the same way.”

Air temperature has risen by around 0.7 °C in the Andes over the past 70 years and lakes are being evaporated faster than they are replenished. Lake Titicaca is close to a tipping point. Just 1 to 2 °C of atmospheric warming – which is expected by 2050 – could be enough to evaporate the top few metres, which would shut down the Desaguadero River and dry up all the water bodies that this river feeds. Such an outcome would be catastrophic for the 3 million inhabitants of Bolivia’s highlands, including the city of La Paz.

“If Titicaca stops supplying the Desaguadero River then the region will enter a new climate regime and the entire Andean Plateau will change from a benign agricultural area to an arid inhospitable area,” says Mark Bush, biologist at Florida Institute of Technology. “This happened during two prior interglacials and each time the dry event lasted for thousands of years.”

It’s not just Andean lakes that are in trouble. Evidence from around the world suggests that lakes are warming, shrinking or disappearing, with huge impacts on ecosystems (see box, below).

The surface waters of the world's lakes have warmed on average by 0.34 °C per decade since 1985. Sweden's Lake Fracksjön is the fastest warming lake in the world, increasing 1.35 °C per decade, outpacing the rise in air temperature around it. Close behind is Lake Superior, one of North America's Great Lakes. "The combination of cleaner skies, increasing air temperature and a shorter period of winter ice cover is behind this rapid warming," says Catherine O'Reilly from Illinois State University.

This rapid warming is disrupting lake ecosystems. In European lakes, cold-loving fish such as Arctic charr decline while populations of warm-water fish such as carp increase. The latter feed on zooplankton, leaving fewer zooplankton to control damaging algal blooms.

Rapid surface warming also separates the deep cold water from the warm surface water, reducing transfer of nutrients and oxygen, potentially stressing organisms that cannot travel across the two layers. Tropical lakes are vulnerable to strengthening stratification because they don't have the cold winter season to help the lake layers equilibrate.

Lake Tanganyika in East Africa is one example of this happening. "We think this has contributed to declining fish yields," says James Russell, from Brown University, Rhode Island – a worrying prospect given that fish are a major source of protein for people living in the four countries bordering the lake, and that the fisheries provide employment for around 1 million people.

The disappearance of lakes across southern Europe, the Middle East and central Asia has been blamed on a rise in water extraction to meet the needs of agriculture and a growing and increasingly water-thirsty population. Climate change has compounded the problem.

“This region is experiencing a drier climate now, which is also driving increased water extraction,” says Erik Jeppesen, a freshwater ecologist at Aarhus University in Denmark. The eastern Mediterranean has just gone through its worst drought in 900 years.

As a result, lakes on the Central Anatolian Plateau lost around half of their surface area between 2003 and 2010, says Meryem Beklioğlu, a freshwater ecologist at the Middle East Technical University in Ankara, Turkey. Lake Akşehir has dried up completely, she says, resulting in the extinction of one species of fish, Alburnus nasreddini, and endangering two other endemic fish species, Gobio gobio intermedius and Leuciscus anatolicus.

Beklioğlu’s models predict that, at current rate of water extraction, one of the largest lakes in this region – Lake Beysehir – will be gone by 2040. “This water is critical for irrigation and for the local economy, but right now we are cutting off the branch we are sitting on,” she says.

Many of Turkey’s lakes are shallow and this makes them particularly vulnerable. As they shrink, salt levels skyrocket. “It happens really fast – just four or five years – and has caused water-rationing in the past,” Beklioğlu says. The smaller volume of water also concentrates nutrients and encourages algal blooms that can be toxic.

“Ultimately, the drying of the lakes along with the loss of groundwater and salinisation, will make the land less viable for agriculture in this region,” says Jeppesen. “This will put significant pressure on northern countries to produce more food, leading to deteriorating water quality in northern lakes due to increased fertiliser run-off entering lakes.”

Further east, changing rainfall patterns coupled with a mining boom and agricultural irrigation have caused more than a quarter of the lakes in Mongolia to dry up by since the 1980s.

Similarly, lakes in south-east Australia have shrunk during recent droughts, with one of the largest lakes – Lake Alexandrina – losing over two-thirds of its volume and experiencing a fivefold increase in salinity in 2009. Heavy water usage by farms coupled with climate change are thought to have been to blame. “This caused localised extinctions of native fish species,” says Kane Aldridge, a limnologist at The University of Adelaide. “Droughts are a natural part of the climate here, but they are expected to become more common under climate change.”

One place that is warming especially rapidly is the Arctic. Viewed from above, it is dotted with millions of ponds – but far fewer than a few decades ago. A 2015 study in northern Alaska shows that over the last 60 years the surface area of ponds has diminished by nearly a third, and nearly a fifth of the ponds have vanished.

This is largely due to the permafrost thawing. When frozen soil thaws, the water can drain, bursting out sideways or disappearing underground. “It is like pulling the plug from a bathtub,” says Guido Grosse from the Alfred Wegener Institute in Potsdam, who has used satellite and aerial photos to document this loss. And once they start to drain they can disappear fast. In July 2014, an Arctic lake with the volume of around 350 Olympic swimming pools emptied in just 36 hours.

“These ponds are the baby lakes, and if they disappear then we will have no Arctic lakes in the long term,” says Christian Andresen from the Los Alamos National Laboratory. This will be bad news for fish like salmon, and migratory birds who depend on these lakes, says Grosse.

Despite the trend, most of the world’s lakes are unlikely to disappear any time soon. And in some areas, such as the Tibetan plateau, the number of lakes is expanding. Rapid glacier melting is cooling existing lakes and creating new lakes there: 1099 in total between 1990 and 2010, representing a 23 per cent increase in surface area.

In the regions that are losing lakes, though, wiser water management could help slow down shrinking, says Beklioğlu.

And for warming lakes, says Jeppesen, reducing the input of nutrients could help to maintain the ecosystem balance. Hard engineering – dredging channels and building dams – can be a last resort.

But as the ill-fated Aral Sea in central Asia that went from being the world’s fourth largest lake to all but vanishing in less than a century shows, once a lake is lost it is very hard to recover. “Closed lakes, and those that are fed by glaciers are the most vulnerable to drying,” says Lisa Borre from the Cary Institute of Ecosystem Studies in New York. “Climate change is a major issue and we will see more Aral Seas and Lake Poopós in the future.”

Read more: This vast lake will die so millions can live better