Video: Thousands rally around the world for ‘March for Science’... 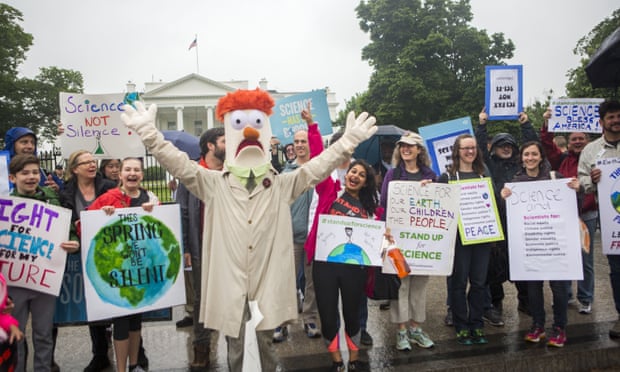 Members of the Union for Concerned Scientists pose with Muppet character Beaker, in front of the White House. Photograph: Jessica Kourkounis/Getty Images

More than 600 marches held around the world, with organizers saying science ‘under attack’ from a White House that dismisses the threat of climate change...

Why March for Science? Because when it is attacked, only elites benefit...

Hundreds of thousands of climate researchers, oceanographers, bird watchers and other supporters of science rallied in marches around the world on Saturday, in an attempt to bolster scientists’ increasingly precarious status with politicians. 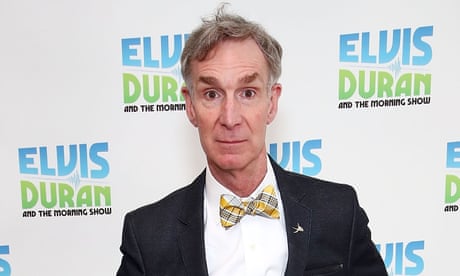 Bill Nye the Science Guy on Trump: 'We are in a dangerous place'

The main March for Science event was held in Washington DC, where organizers made plans for up to 150,000 people to flock to the national mall, although somewhat fewer than that figure braved the rain to attend. Marchers held a range of signs. Some attacked Donald Trump, depicting the president as an ostrich with his head in the sand or bearing the words: “What do Trump and atoms have in common? They make up everything.”

More than 600 marches took place around the world, on every continent bar Antarctica, in events that coincided with Earth Day.

The marches, the first of their kind, were officially non-political. They were however conceived by three US-based researchers – Caroline Weinberg, Valorie Aquino and Jonathan Berman – after Trump’s inauguration. Organizers have said science is “under attack” from the Trump administration and many protesters excoriated the president with signs that likened him to a dangerous orange toxin or disparaged his now defunct university .

Trump released a statement that insisted his administration was committed to preserving the “awe-inspiring beauty” of America, while protecting jobs.

“As we do so, we should remember that rigorous science depends not on ideology, but on a spirit of honest inquiry and robust debate.”

The US marches were some of the last to take place, following hundreds across the world. A common theme among protesters was a worry that politicians have rejected science-based policies.

“I’m encouraged by the marches I’ve seen already taking place around the world,” said Rush Holt, a former congressman and head of the American Association for the Advancement of Science. “For generations scientists have been reluctant to be in the public square. There is a lot of concern.”

“There’s very low morale among government scientists because science is under assault from this administration,” Mann told the Guardian. “That being said, events like this will lift the spirits of scientists. They are finding a voice.”

Pharmaceutical companies, concerned about the impact on research talent of Trump’s attempts to ban or restrict travel from certain Muslim-majority countries, risked his wrath by supporting the march. In a video, Pfizer said it was “proud to stand behind our scientists”.

Trump has galvanized scientists with his comments about climate change, which he has called a “hoax”, as well as questions about whether vaccines are safe and threats to cut funding to universities that displease him.

The White House’s recent budget proposal would remove around $7bn in science funding, with the National Institutes of Health, which funds medical research, bearing much of the pain. Earth sciences, ranging from weather satellites to marine research to coastal preservation, are also lined up for severe cuts.

Thousands rally around the world for ‘March for Science’

Climate change was at the heart of the March for Science, spurred on by dismissals of the issue by Trump and his top advisers. Budget director Mick Mulvaney has said climate research is a “waste of your money”. Scott Pruitt, administrator of the Environmental Protection Agency, has erroneously denied that carbon dioxide is a primary driver of global warming. 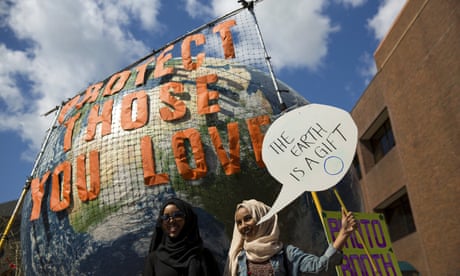 Earth Day 2017: ‘The experts are fighting back’

Other areas of science have been all but abandoned. The president has yet to nominate administrators for Nasa and the National Oceanic and Atmospheric Administration, nor to appoint his own science adviser.

The march has proved controversial within the science community, which is typically reluctant to be overtly political. Some scientists have raised concerns that the marches will invite attacks by Trump and his supporters, or will fail to convince the public that science has inherent value.

But several famous voices have joined the cause. “Science has always been political but we don’t want science to be partisan,” Bill Nye, a prominent engineer and TV personality, told the Guardian.

“Objective truths have become set aside and diminished and lawmakers are acting like a strong belief in something is as valid as careful peer review.”

Nye said science was in a “dangerous place” but hoped the march would help nudge Trump to a more amenable position.

“The president changes his mind quite frequently,” he said. “We want to influence the people who influence him. That’s our goal for the march.”

“Doing that would keep people like me from getting a masters or PhD,” he said. “If we want brown people and women getting these degrees and get them involved in science, we have to fund it. The administration needs to get its head out of the sand.” 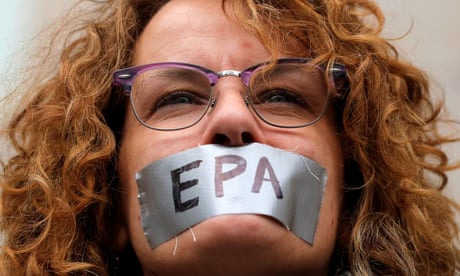 Ten of the best March for Science signs – in pictures:View gallery

Cristian Samper, president of the Wildlife Conservation Society, said the march aimed “to celebrate science, not to politicize it”.

“Science is behind the good news and bad news about wildlife conservation ,” he said. “it has nothing to do with the fake news. Science is the antithesis of fake news.”

The marches came one week before the People’s Climate March, a series of large-scale events focused on climate change that will be more overtly political.

“When politicians cater to fossil fuel interests by denying the basic realities of climate science and pursuing anti-science climate policy, they endanger the jobs, justice, and livelihoods of ordinary people everywhere.”